Sometimes, there are little opportunities taken to provide permeability for people walking and cycling where drivers have to go the long way round.

The quality is variable (often because of the width we have to play with) and we get the inevitable concern about how we slow cyclists down. I make that comment with my tongue in my cheek, because we have to think about the context.

If we have a link/route (path, gap etc) and if the issue really is that people are cycling too fast for the conditions, then there is a design issue which is creating conflict by mixing people walking and cycling together. If the route suffers from real conflict, then we should be asking if there are better (and safer) routes because conflict often occurs because of a decent lack of alternatives. 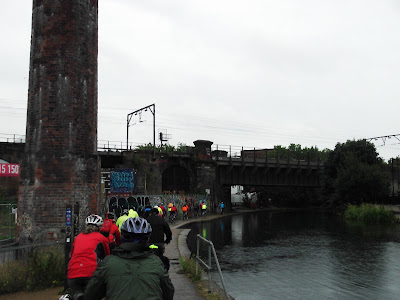 Parks, tow-paths (as above) and pedestrian areas often suffer from conflict because there are no decent transport cycling alternatives and so we see attempts to slow "speeding" cyclists rather than providing decent cycling infrastructure. Slowing people who are cycling then degrades the point of utility cycling in the first place in that it should be a quick and easy alternative to the car for short trips. 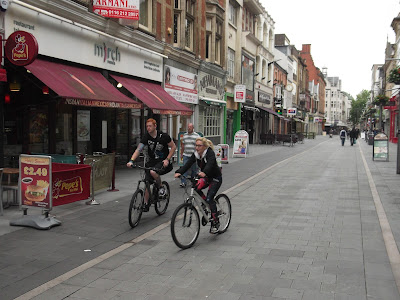 Above - cycling in Leicester town centre is permitted in the pedestrian zones because people on bikes need to use the shops. However, through-routes are also needed for those not stopping as their speed might be seen as inappropriate for the context.

The features which then get deployed then either create more conflict with people walking (staggered barriers especially), stop people from being able to cycle with non-standard or adapted cycles (staggered barriers, A-barriers, K-barriers etc). The latter also impacts on people using mobility scooters (who often need similar space to people using non-standard or adapted cycles within which to manoeuvre). We also get rumble strips place across paths which can be uncomfortable for many people on foot or wheel. 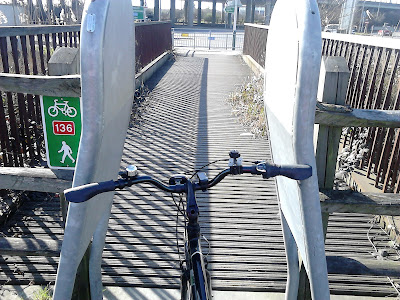 Above - an 'A' barrier which stops even a standard cycle from being ridden through. Dismounting is not an option for everyone.

Many people find cycling easier than walking and indeed, many disabled people use not-standard and adapted cycles as their primary mobility aid. Therefore building conflict which is difficult or uncomfortable to use is as discriminatory to those using cycles as mobility aids as those walking who end up being put into conflict. It could be seen as double discrimination.

People's mobility changes. This might be a gradual thing where we all get older and less mobile, or it might be transient such as carrying heavy shopping or travelling with kids. From that point of view, mobility is a spectrum and as is always the case, provision for those who need it most makes life better for everyone. 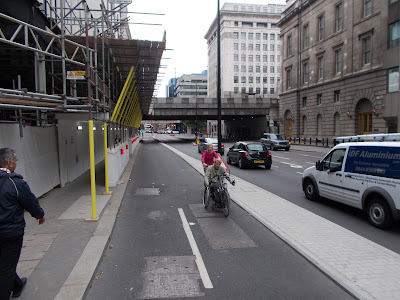 Make a cycle route safe, comfortable and accessible so everyone can use it; and on equal terms.
Posted by The Ranty Highwayman at Thursday, August 17, 2017