I wrote a blog post on traffic orders quite a while back, but I though it worth returning to the subject to talk about the use of pedestrian and cycle zones which are normally a town centre thing, but it needn't be so.

I'm no fan of the Organised Taxi Lobby™, but some people rely on them and even I must accept that lorries are going to be with us for a while yet, so I though it worth showing how we can use the tools we already have to enable selected access to specific areas;

Actually, I think most of you will have seen some of this in action in pedestrian zones which (at their purest) allow walking and cycling at all times with time-based access for deliveries; 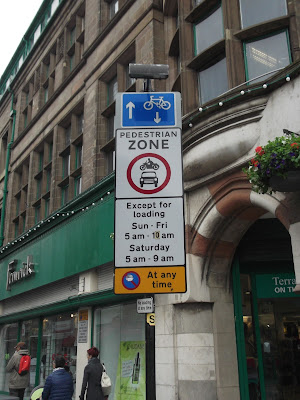 The sign above means that the area beyond is a pedestrian zone which operates all of the time into which no motor vehicles (the circular sign) are permitted unless they are loading between 5am to 10am, Sunday to Friday and 5am to 9am on Sunday. The yellow "at any time" means there is no waiting - in other words, if you're in there, it's just for loading; the sign replaces double yellow lines (with repeaters in the zone). The road is also one-way for motor traffic and two-way for cycling (the separate blue sign at the top).

The circular sign in left blank (i.e. no picture of the car and motorcycle) then it would mean "no vehicles", including cycles. It's daft, but sadly prevalent in the UK where deliveries are allowed (at certain times), but cycling is banned.

The properly up to date sign is a "pedestrian and cycle zone"; 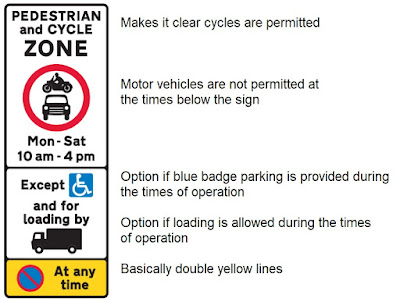 There is lots of flexibility with this sign. If the time period in the top panel is omitted (like in the photo above) then the zone operates at all times (we can select the times it operates too. The middle panel provides various exceptions which can be in any combination;

The sign above tells us that the pedestrian and cycle zone operates all the time, but anyone can load (not just lorries in this case) and taxis can be driven through. Let's have another;

In this case, the pedestrian and cycle zone operates 7-days a week, but between 8am and 6pm. Outside of these hours, anyone can drive through. The only people allowed to enter the zone during the hours of operation are those with the correct permit. OK, one more;

This would be a part time pedestrian and cycle zone which operates on weekdays for an hour in the morning and afternoon. Blue badge holders and permit holders are excepted. This could very easily be a scheme around a school, although because the times will always be the same, there will be a theoretic disadvantage to those wishing to bring a vehicle into the area during holidays - they couldn't (we can't use "term time" on a traffic sign because dates always change).

Having stated this, Edinburgh have manged to get round the term time issue by have the zone operational when lights flash;

This will have "non prescribed traffic signs" approval (under Scottish rules) and forms part of a bigger scheme of "school streets" in the city which seeks to prevent parents driving their children to the school gate.

Zones should also have an end (so people know they have left); 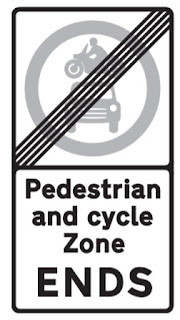 I think this is a great tool and more should be made of it our of town centres as Edinburgh has done. It's not going to work everywhere and it needs enforcement to be effective (although we can use cameras), but in the quest for lower levels of traffic in those places where people live, work and play, we really could push out those who we don't want to drive through an area without to badly affecting those who might need to get in.
Posted by The Ranty Highwayman at Sunday, July 23, 2017