As well as producing this blog and going on about stuff on Twitter and Facebook, I have also done the odd talk and I have a monthly column in Highways Magazine.

Public Speaking
Like many engineers, I like to talk about engineering and have been known to give the odd talk. If your group would like me to talk at a group meeting or give a presentation, I am always happy to consider it, but time is often at a premium for me and so I can't give guarantees.

Here is a list of events I have presented at:

PTRC - Urban and Highway Design & Street Clutter (a lecture I give twice a year). Contact me via Twitter or the Questions page for a copy of the slides.

I spoke about the Beyond the Bicycle Coalition at the CamCycle AGM on 18th January 2020 - reported here in their magazine.
Institution of Civil Engineers - Going Dutch – five lessons in good cycling infrastructure from the Netherlands - a "lunch and learn" webinar with extended Q&A session can be found here.
I gave a talk about what makes a good cycle route to Cyclox at its meeting on 18th May 2021 which can be viewed here.

What started off as volunteering to help with the project ended up with me writing the technical guidance (with lots of help!) which is designed to give advice to engineers on the issues they should be considering when designing to facilitate walking. 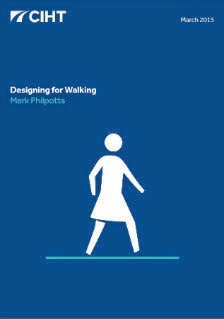 The guidance will also be of use to non-technical people who are trying to wade through the minefield of terminology and techniques; and best of all, CIHT has made the document freely available to download along with other guidance which is being developed under the banner "Streets & Transport in the Urban Environment - STUE".

And I was filmed for Brake's "Our Voices" series of videos in November 2019, where I talked about safe streets.

Highways Magazine
I have had a column in Highways Magazine since March 2014 after being approached by the Editor who had been reading my blog. It is kind of my blog in paper form and I do try and write about wider subjects, although walking and cycling tends to pop up quite a bit! The digital version of the magazine is free to read, have a look on the website. 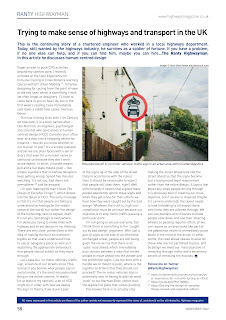 Other writing
Comments from an interview by Laura Laker on the Zag website where I was talking about "cheeky junctions" and the Dutch context.
A guest article in the first 2021 issue of the Cycling Industry News trade journal where I talk about delivering cycling infrastructure and how the cycling industry can help.
Comments on three things which could get people cycling on the Pearson 1860 blog in February 2021.