I've written about risk a fair bit in the past, but it's always worth coming back to this interesting subject every now and again.

The thing about risk is that we deal with it all the time without actively thinking about it, but when we stop, we are often poor at assessing it. For example, if we make and carry a hot drink from the kitchen to another room, we have unconsciously weighed up all sort of risks - the risk of electric shock from the kettle, spilling the drink over ourselves and tripping over because we are concentrating on the drink and not the floor. 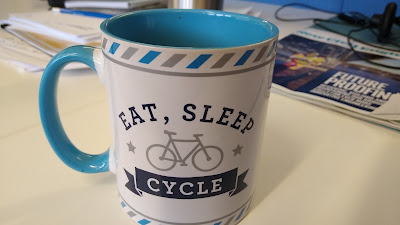 When you stop to think, you realise that although the consequence of electrocution is high, the likelihood is very low because of your faith in the systems in place to make sure kettles are sold safe and this extends to the fact that they all have short cables this days to reduce the potential of small children pulling the off the counter. In other words, the system has been engineered to protect the end user.
The walk from kitchen to the other room is something we have a great deal of experience of. Spilling a hot drink on oneself can lead to severe consequences for some people, although most people will probably not be injured. The actuality of spilling your drink will be low for most people too. At this point, I heartily recommend the "You're Wrong About" podcast which covers hot coffee. the point here, is that you have a highly developed skill of carrying mugs of hot liquid.
The walk between the rooms is something you have done so often that you are entirely familiar with it and you simply don't expect to come across any changes to the walking surface or an incident which will cause you to trip, even though you are invest more cognitive load in carrying your drink. Your ability to operate on autopilot is based in you not expecting any change in risk from something you have done for years.
So, we have some engineering with the kettle, skill and experience in carrying a hot drink and a local environment which is predictable - are these concepts starting to sound familiar? Of course, these are concepts we can transfer to streets thinking in terms of how we can create safe systems within which people can go about their business. Yes, there are features which require good engineering or regulation (the kettle), people should be able to prioritise their cognitive load where it's needed (carrying the cup) and the environment should be as consistent, legible and predictable as the walk between rooms.
We have developed an unhealthy obsession (or dependency) on the use of private cars in the UK to the point where their impacts are simply not seen or acknowledged by many people and beware anyone who raises the issue - you'll be called a crank or worse. It's a cultural problem that we have created and so when we want to challenge it through street design, it is no wonder that we get backlash. This car-culture isn't confined to people to drive a lot, it is also in the pores of people who don't drive and who have a learned experience of being subservient to motorisation. 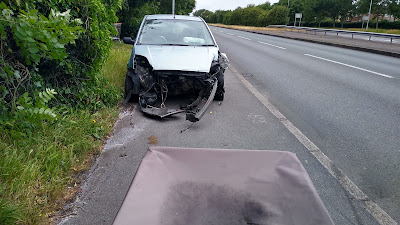 The aftermath of a crash which is seen as routine,
but blocking the path of by a dual carriageway doesn't
feature as a risk in anyone's mind.
We shrug at casualties because they are seen as the price to pay for modern life. Air pollution and climate change don't push through because they are perhaps conceptual and lacking in immediacy. We can easily look at traffic conditions and decide whether to cross the road is an acceptable risk, but we can't look at buying a new car and working out how it will contribute to looking ahead to warming of the planet - it's a hazard which isn't going to cause us harm in the now.
People have a poor ability to assess risk and throwing that in with cultural norms from having a driving culture, all rationality goes out of the window. This is where we get people saying that a new pedestrian crossing is "an accident waiting to happen", that floating bus stops are dangerous to passengers or Low Traffic Neighbourhoods stop emergency vehicles getting anywhere - what people actually mean is we have disrupted what they are used to and so it feels riskier, even when objectively, we are reducing risks for many people.
Our poor ability to judge risk also means we put in acres of pedestrian guardrail, place warning signs everywhere and encourage the most vulnerable to wear yellow vests. In other words, we are wrongly assessing the risks and trying to use measures which don't tackle the main hazard and that's the use of motor vehicles. 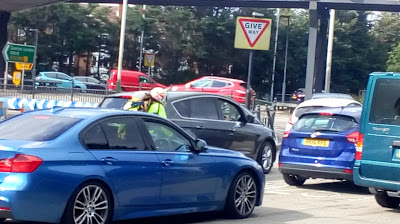 Yes, the person in the yellow coat with the full face
crash helmet is on a pedal cycle mixing with motor traffic
about to enter a busy roundabout. Risk assessment all over the place!
Risk assessment as a process is interesting and it is valuable, but it is a skill and needs to be undertaken in a structured way. The key reason for doing it is to identify the things that have the potential and likelihood of causing the most harm and dealing with them, rather than the things that are less likely to cause harm and are unlikely to happen anyway. This is why in any safe traffic system, we concentrate on separating those moving with the most energy from those moving with the least and if we could get that right more often, then we can address to driving culture that takes so much effort to manage.
Posted by The Ranty Highwayman at Saturday, December 18, 2021