Prompted by a tweet by Mike the Navigator, I thought I would muse about the way we design on-street parking.

I guess it's a fairly mundane subject and you'll be pleased to learn that I'm not going to go into the legal process, but suffice to say, this week I'm interested in the design of parking where we mark out bays in the road.

There are three main ways to mark out parking bays (in relation to the kerb);

The choice of layout for the street will often be governed by its width because clearly, perpendicular and echelon take up more of it.

You will have seen parallel everywhere and as a rule of thumb, 6m long bays will be sufficient for most people to reverse into to park - some people struggle to parallel park of course and so you see them pulling in and then trying to jiggle the car back and forth to hug the kerb!

Perpendicular parking will certainly be familiar in car parks and for many people, they'll be easier to drive into than a parallel bay, although many will park "nose in" and then reverse back into traffic from a position of very poor visibility such as this example from Bristol. Pulling out from a perpendicular bay requires the driver to look at traffic coming from behind and with vehicle blind spots, vehicles parked behind and in some cases people having limited movement, it can increase risk as people who cycle will attest to. 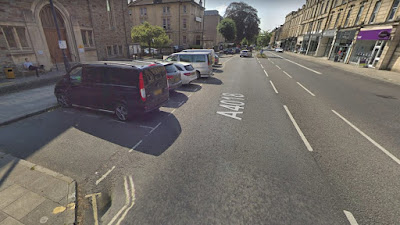 If one reverses into the space, then leaving it will be from a better position of visibility. Perpendicular parking also means that nobody needs to exit the vehicle into live traffic and if people reverse in, they can load the rear of the vehicle from the footway. In a street context however, there's always the issue of drivers parking with the vehicle overhanging the footway and reversing in does turn exhausts towards people.

Echelon parking is perhaps even more unusual to see anywhere, but if it is done correctly, it too can offer a safety benefit. The key to a properly designed echelon parking bay is its orientation. With my sketch above, drivers on the side of the street with the bays are forced to drive past the bay they have selected and reverse in. Leaving doesn't quite have as much visibility for the driver as a perpendicular bay, but they will soon get a full view as they emerge which is far better than reversing out.

The problem is of course that on a two-way street, people driving on the other side of the road can easily swing across the road and park nose in. Despite being quite unusual, examples we can find are often the wrong way round such as here in Southend-on-Sea where a huge area given over to echelon parking; 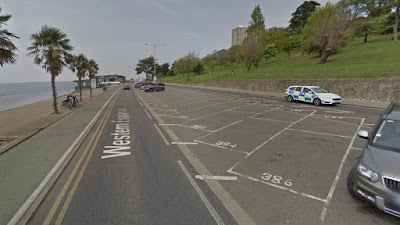 I've done a big of digging around and it's hard to find a UK example of where it's been done properly - there was an example in Islington, London, but looking at Streetview, the layout today has been changed to parallel parking. 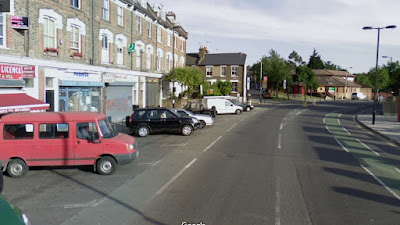 As you can see from the old Islington layout above, the layout is being used properly because the angle makes it obvious that one reverses in. I think that the arrangement works best on one-way streets (for general traffic) because drivers have no choice but to reverse into the bays.

There is local guidance in the UK. Manual for Streets has a guide to parking bay layout on Page 111 and designers are encouraged to arrange bays so they are reversed into. So there you have it, we usually see parallel parking on our streets, but in the right context, it's not the only option.

*OK, I mean echelon
Posted by The Ranty Highwayman at Saturday, February 15, 2020