Why do our streets get so much "stuff" put in? Why do we build speed humps which annoy people? Why do we stick crossing refuges in the middle of the road? Why don't we put some signs up to stop people doing something? Why don't we give more green time to that road? Why are people cycling on the footway? Why do we need clearways at bus stops?

The list of complaints about how our streets are managed, maintained and operated, or how people use them, is pretty long in my experience and probably has all sorts of combinations. I think I can boil them all down to just three themes (you may have other views, so please comment);
There are potential overlaps, but I think there are subtle differences between the themes. I should also apologies for the generalisations and stereotypes, but I'm not being scientific here, it's an opinion piece and you are welcome to disagree with me! I think the following is a good diagram to some up the overlaps and themes which I'll discuss below; 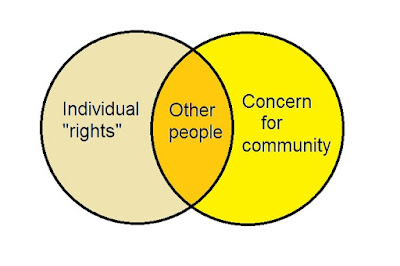 An individual's right to do what they want
This essentially stems from a libertarian viewpoint about having a small state which does not interfere in people's lives. It is the complaint about parking restrictions, the cost of parking, objecting to speed humps, objecting to filtered permeability and so on.

Of course, it's not always the perspective of someone who identifies as a libertarian, so it goes back to personal convenience. People who don't want a zebra crossing or a bus stop clearway outside their house will always cite the inability to park outside their house, or for tradespeople to park (these objectors always have tradespeople); of course, parking is often cited by business owners, although it's often about *their* parking rather than space for their customers. A filtered permeability scheme means they have to drive further to get out from their house, or it forces them to use a congested route.

It's interesting as the type of complaints around this theme are rarely coming from the point of view of pedestrians, cyclists or bus passengers. One could argue that a request for a new zebra crossing is about a "pedestrian" wanting to do what they want with controls on other people, but in truth, they have been excluded from crossing by the "freedom" of others. Ever since we unleashed the motor car on our streets, we've been trying to manage it and perhaps many of the problems stem from this.

Of course, some "cyclists" (whatever that word actually means) do come at things from a libertarian point of view; they are from the "vehicular cycling" camp. The principal position is that roads are for all (and by roads, they mean the carriageway) and any attempt to pen them in with "infrastructure" is against this "right to ride". Of course, the position always manages to sidestep the fact the the UK has a pitiful cycling mode share because most people are scared of cycling with traffic.

In truth, apart from some localised improvement in cycling rates in some UK cities (significantly enabled by infrastructure), the mode is for all intents and purposes designed out of the road network. This has spread to those walking too as the mode has been in decline since the 1970s.

Streets have been redesigned (or taken over by default) by those wishing to enable motoring and because of this "politics of space", those not using cars have been pushed out and marginalised. The politics which have enabled this to happen essentially come from the idea that people should be free to travel when they want. Of course, this sidesteps the fact that in most of the UK, choices have been squeezed out.

How other people behave
This is where the is an overlap. At one end of the spectrum, we get complaints about the behaviour of people which directly affects the person making the complaint; I state this without judgement, but it can mean all sorts of things (but I'll stick to transport). At the other end of the scale, it's behaviour which does not directly affect the person complaining, but they are still worried.

With the first, an example might be the classic about a kid on a BMX cycling on the footway passing too close the complainant. It didn't feel comfortable (people do occasionally get hit, although drivers hit pedestrians on the footway with frightening regularity). Another example could be the pedestrian looking at their phone while crossing road and the complainant is a driver who "nearly hit them".

The cycling example is one where the complainant feels scared, the pedestrian on the phone example is where a driver felt irritated as in truth, they are in 2 tonnes of metal. In both cases, you can see that it's not a huge leap for people to start calling for the police to deal with yobs cycling on the pavement or to deal with zombie pedestrians.

This is very much a case of where we are still talking about the rights of individuals (often perceived) impinging on the rights of others. The kid cycling on the pavement has had his rights removed by the system, but the pedestrian's rights are eroded by the behaviour. The driver's right to proceed without modification is being eroded by the pedestrian not looking. The pedestrian may be blissfully unaware or simply pushing back to claim the space that they have been designed out of.

At the other end of the scale, the community concern slant is that someone is not directly affected by a particular behaviour is worried about the impact it has on others (who may be more vulnerable than the complainant). An example could be poor parent parking by a school which worries someone who walks past every day, but has no children at the school.

Behaviour is a really difficult thing to quantify because in terms of the person complaining, it could be deeply subjective or it could be used by someone to make a point to support their own position which is that of their right to do what they want.

Community concern
I think that genuine community concern is sometimes hard to grasp because of the overlap and for observers or people with a different view, it's hard to be objective. Take some of the current cycling infrastructure stories such as London's CS11 and East Dumbartonshire's Bears Way. CS11 has not been agreed yet and the second phase of Bears Way has been rejected by councillors. Common to both schemes is that there are definitely two sides to the community concern (at least as presented).

On the one hand, there are people and groups who support the schemes because it will give more people more travel choices, enable children and families to cycle and provide wider societal benefits. On the other hand, there are people who come at it from the point of view that it will take out motor traffic capacity, divert traffic onto other streets, be bad for businesses and so on. Who is right?

I'm biased of course, but hopefully after considering the evidence and the arguments objectively. The answer for me lies in the language. Those who talk about behaviours are key in sorting out their true position in my view as it reveals if they are actually coming from the "individual's rights" point of view; people are allowed to be concerned or worried of course, it's only natural.

Those worried about loss of parking outside local businesses, are they projecting their personal concern that they are going to find their own driving to those businesses more difficult? Are those supporting cycling infrastructure doing so because they are anti-car? Perhaps both points are true with some people, but in my experience most complaints can be sifted between those about individual rights and the community. Perhaps those in the behaviour overlap worth spending less time on.

True community concern comes from those worried about the wider population and especially those who don't have a voice, or perhaps more accurately, those who are prevented from having a voice because of their age, personal circumstances etc. The sort of comments you get from people like this might acknowledge that a scheme might impact on their personal circumstances, but it's worth it for the wider good.

The classic transport example is the thorn of filtered permeability. Those who object generally do so from their personal right to drive position and those who support tend to come from the concern for the wider community. Some objectors are worried about visitors' ability to drive to them and some are more interested in personal peace and quiet. But, where you seen campaigns for change, they tend to be powered by those reaching out to the community rather than being concerned with personal gain.


Where does it leave us?
I've not got the answers, just opinions. It seems to me that in terms of looking to enable active travel, to push for healthy streets, to aim for walkable neighbourhoods and all of the stuff I consider to be a good thing, energy is best put into looking at the community concerns first. They are the things that lead to mass action engineering such as lower speed limits, modal filtering, better crossings and cycle tracks.

Spending time looking at the issues around the assertion of the individual's rights (in the strict sense I've set out the position above) doesn't get us very far. Even the behavioural overlap probably takes too much effort to deal with universally and so dealing with issues most likely to cause harm is where energy should be expended.
Posted by The Ranty Highwayman at Saturday, October 15, 2016