Yesterday evening I joined the vigil for Ardian Zagani, another person who was killed while performing the everyday act of cycling to work. This is the speech I made at the request of Stop Killing Cyclists, the organisers of the vigil. 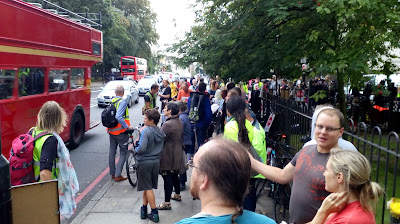 Between January and September last year, over 25,000 people were killed or seriously injured on UK roads, this is up 6% from the same period in 2015 [1]. The end of year data is not available because the Government delayed publication from June to the end of this month. It's telling because the Department for Transport is blaming the police [2] who we know have suffered and continue to suffer cuts year on year.

We're very good at putting a cost on a road death. In 2015 [3], the average cost per casualty was £1,783,555 and the average cost per accident was £2,005,664 – a figure often used if we try and put a value on prevention. Accident is not my choice of word, this is from the official Department for Transport data table.

In 2015 [4], just over 400 people died while walking and nearly 5,000 were seriously injured; overall, just over 24,000 people were hurt while walking – this is roughly the population of Rickmansworth. In the same year, 100 people died while cycling and nearly 19,000 were hurt – this is roughly the population of Waltham Abbey. 10% of those people hurt were children and 80% of those hurt were cycling on a 30mph road. It's not just about killing and injuring people using our roads and streets, it's also the costs arising from polluting the air we breathe and the inactivity of the population – this is set to dwarf some of the statistics on direct casualties I have just cited.

There are flaws in the data collection system, from mis-recording, to how modes are compared. It also doesn't show the shift of serious injuries to those outside motor vehicles, nor does it show how people have been pushed off out streets.

The figure of £2 million to prevent a death could easily fund the retrofit of half-a-dozen urban junctions to make them fit for walking and cycling. It would almost fund a world-class “superhighway” style upgrade to a mile of urban road – and that includes junctions. This is, of course, peanuts when we consider what is spent on road building schemes. £1.35 billion pounds has just been spent in Edinburgh on the new Queensferry motor traffic bridge. The Welsh Government is planning to spend a billion pounds bypassing a section of the M4 near Newport. Here in London, Mayor Khan remains committed to spending a billion pounds on the Silvertown Tunnel. Of course, we all know about the Government's ambition to spend £15 billion on English motorway expansion.

In my job, I'm often looking at data which is used to inform or justify changes to our streets and it is very easy to get lost in the statistics. There are people behind the numbers and that is why we stand here this evening to remember Ardian Zagani; a fellow Londoner who, like many of us here this evening, was just trying to get to work on his bike last Tuesday morning; a simple act in which he ended up dead. We also need to pause to consider the people he has left behind – his family, friends and colleagues. We need to pause and think because all too often people getting killed on our streets is taken as a price worth paying to keep our traffic-chocked cities as they are.

A death on our streets is a stark reminder to those working in my industry that despite the effort which has been put into protecting those building our infrastructure, for some reason this often ends at the site gate. If my industry was still killing and maiming its on-site workforce on an industrial scale as it did in the past, there would be calls for regulation, prosecution and systemic changes to how we construct our infrastructure.

I was fortunate to spend some time on holiday in the Netherlands a few weeks ago and I was even more fortunate to be able to experience Dutch cycling infrastructure first hand with my children. Cycling is a pragmatic and practical mode of transport for short distances and the Dutch have catered for it everywhere. Whether it was the crazy bustle of Amsterdam or the rural peace of South Zeeland, we felt safe and we were protected by cycleways on main roads, separation at large junctions or low speed and low traffic streets and country lanes. There are so many things to learn from a country just across the North Sea.

We don't even need to go that far. We are starting to see world-class layouts in London, Edinburgh, Manchester, Brighton, Leicester and Cambridge to name just a few places. We don't always see perfection, but we certainly see protection and ideas which can be rolled out across the whole country for a fraction of what we are spending on big roads in this country. This remains under threat however, and we must remain vigilant. It is good to see that UK cities are starting to appoint walking and cycling commissioners, it's even better to see them speaking out for active travel and trying to bring people together like Chris Boardman is doing in Manchester even before he starts his new role!

In truth, design and construction is the easy part, it is the leadership in which we are lacking. Unless people with influence speak out and make the case for enabling active travel, we are not going to see the change we want and need. Engineers, planners, health professionals, business people, community leaders and others must speak out against the status quo and indeed the hostile reaction active travel seems to bring out of many.

Ultimately, leadership has to come from those entrusted with making decisions on transport at a national, regional, and perhaps most importantly, at the local level. Leadership on active travel will translate into a shift in culture within local planning and highways departments which are all too often stuck with old ways of thinking, which haven't changed in generations. Good leaders can also bring people together to meet a common aim.

So, as we stand here to remember Ardian Zagani, let us not allow his death and those of so many other people be in vain. Let us use our sadness and anger to demand the change which is so desperately needed for our streets.

I sincerely thank you for coming out this evening and for listening to my words. 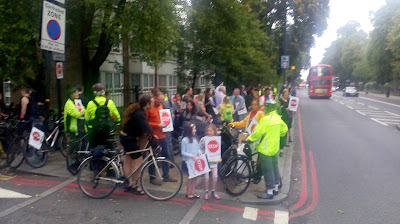