It's been an interesting and varied week for me (that's why I like being an engineer), but I am posting about one thing on my mind; the tricky subject of tactile paving.

Tactile paving is ubiquitous on our streets, although those of us in the game and some users are the only people who know what it is for. I was at a workshop with Urban Design London earlier this week where we spent the day talking about tactile paving (living the dream!).

We were fortunate to have Dr Kit Mitchell with us who was involved in the original research into using tactile paving when at the Transport Research Laboratory - specifically blister paving which is the square grid pattern of "bumps". It was proposed as a way of dealing with the important issue of providing flush kerbs at pedestrian crossing points. Of course, with flush crossings comes a significant safety risk for visually impaired people and so something was needed to show that people were at the edge of the footway. The blister paving was born. It is not a panacea as the blisters can be painful or uncomfortable for some people to walk on - the I'DGO information sheet on the subject is well worth a read.

These days we have managed to land ourselves with 7 types of tactile surface/ paving which are often used incorrectly and potentially dangerously! "Guidance on the use of tactile paving surfaces" is the current design guidance which has been in place since 1998 and I would recommend that it is read and digested by designers and campaigners alike as it gives far more detail than I will here.

The guidance is not without its problems as the layouts tend to be "perfect world" with "real world" examples of how one should cut tactile paving flags properly to fit curves. Maintenance is mentioned, but there is no practical information on how tactile paving should be laid - this would be good for designers, installers and maintainers (more on that later).

There is no legal duty to provide tactile paving, but given the need to ensure our streets are accessible to all as implied by the Equality Act 2010, it should definitely be used where visually impaired people are likely to be walking towards dropped and other flush kerbs at a road edge. There are other layouts in the guidance each giving a slightly different message and certainly, some uses are also of real benefit in terms of the safety of visually impaired people.

I have mentioned the square-grid blister paving which is used wherever people might be crossing the street and the kerb is flush with the road - it could be at a dropped kerb (ramp) or where the road (or a cycle track) is brought up to footway level. Blister paving should always be provided in pairs as we are sending the message to people with reduced or no vision that they are about to enter a road. For zebra crossings and signalised crossings, red blister paving is normally used and normally in an 'L' shape as in the first photo to indicate the push button being on the right for a signalised crossing. The "stem" which runs away from the crossing at right angles is to assist people in locating the crossing position. At other crossings (uncontrolled), a colour contrasting with the surround paving (other than red) is recommended, although people often use buff or light grey.

Next we have the "corduroy hazard warning surface" which is a series of "bars" with round tops. It is intended to mean "proceed with caution" and is best used at the top and bottom of steps, but is also used at the bottom of a ramp leading up to on on-street "light rapid transit system" (trams etc), to warn that people are about to walk onto a railway platform, at railway level crossings and where a footpath joins a shared-use (unsegregated) cycle track. You can see why blister paving would be dangerous here!

We then have platform edge (off street) blister paving (to be complicated) which is used to warn of the platform edge at railway stations. The blisters are offset in each row to form a triangular grid (rather then the square grid used for crossings). Only laid in a single line, this paving is used a white platform edge line and often a yellow line back from the edge. There is less risk of people stepping over this type of paving (so 800mm not needed) as people in a station will be taking care to find the edge.

Following the rail theme, we next have a similar approach for railway stations, but this time we have "lozenge" shapes for on street LRT stops (trams etc). It is different from the off street blister paving because these stops are on the street and the railway blister could confuse people into thinking they are about to cross a road. However, as with railway stations, visually impaired people will be there by choice and so one row is needed.

The 5th type of tactile paving has a series of flat-topped "bars" on them (similar to corduroy) and is used on shared-use, segregated cycle tracks. When the bars are laid across the line of travel (known as "ladder"), this shows the "side" for pedestrians, giving a rumble to people cycling over them. When laid with the direction of travel (known as "tram", this indicates the cycling "side", although the bars can catch bicycle tyres, worse when they are wet. The paving is used at the start and end of these segregated tracks and as repeaters.

The ladder and tram paving is used with the 6th type of tactile paving - the raised "delineator strip". It is essentially a small kerb or even a raised road marking (to the same dimensions) used to help visually impaired people to keep to the pedestrian "side". Of course with protected cycle tracks (stepped, or kerb-separated) the ladder/ tram and delineator are not needed at all!

We finally have the "guidance path surface". Used in the line of travel, this paving type is easily confused with tram and indeed corduroy; but the shape is slightly different. It is intended to help visually impaired people navigate open spaces where building lines or kerb lines are not available by either following the paving or for cane users, using the ridges to follow with their canes. It doesn't often get used, but could be useful to guide people at public transport interchanges for example.

I have briefly set out the "official" advice on using the different types of tactile paving, and clearly, there is lots of room for confusion. As I mentioned at the start that I was at a workshop and it was to discuss in general terms what people thought was good and bad about tactile paving. Having engineers, urban designers and visually impaired people (plus some groups representing them such as Guide Dogs) was a great idea as I think everyone learnt a bit that day. 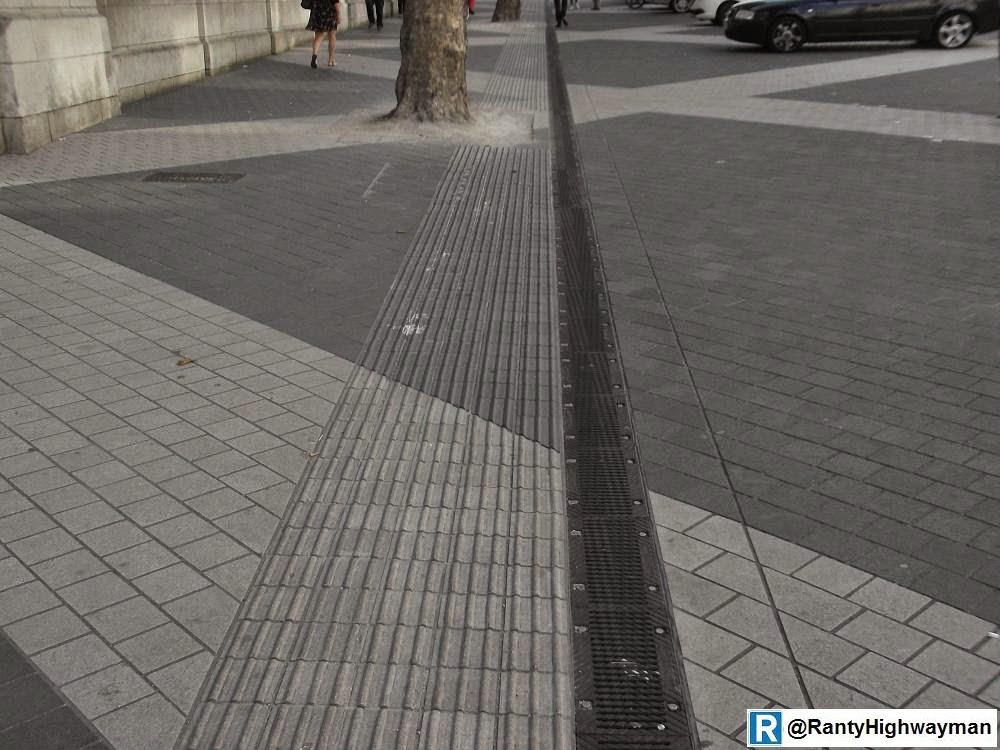 There was some discussion on "non-standard" use of tactile paving for level surface (shared space schemes) which mark a nominal edge of footway to assist visually impaired people. For example, Exhibition Road in London uses corduroy paving. Of course, being a shared space scheme, one questions the need to demarcate anything as all users are meant to be sharing, right?

I will be blogging about shared space in the future and so in the case of Exhibition Road, I will simply state that groups such as Guide Dogs were extremely concerned about the concept (and remain concerned more generally), although the Royal Borough of Kingston & Chelsea belatedly engaged with those with concerns and did some testing. Personally, I am not convinced.

There was also discussion about some proposed changes to the guidance which the Department for Transport will consult formally on soon. This included the following points;


The first point in theory reduces the amount of paving area needed and in terms of how a street looks, follows the less is more idea without impacting on visually impaired people. I suppose this is fine if the paving is well-detailed and installed, but it will introduce more cut pieces of paving which are notorious for failing - a view expressed by quite a few people.

The second point is driven by aesthetics to some extent, although red tactile paving surrounded by red paving doesn't give contrast. Many people (including users) felt that contrast and the 'L' shape (when it should be used) was more important than the colour; frankly, if users are happy, then so am I.

The third point would cover any flush kerb situation. I suspect it was primarily driven by shared space schemes not providing some kind of demarcation between the "footway" and "carriageway" (which is oxymoronic), but would apply to speed tables and dropped kerbs more generally. I sometimes see speed tables which are poorly designed or installed which are flush, but with only a small area covered by blister paving (not necessarily on the desire line). Shared space issues to one side, this is a good idea.

There was also a discussion on a suggestion to add a tactile arrow to the push button boxes to show the crossing direction with an example from Israel being given. Finally, there was a suggestion to provide a rotating tactile cone on push button boxes when used on both sides of signalised crossings (convention is only to provide on the right hand side). Although users are using the 'L' shape to find the push button, on wide crossings, if people found the push button on the left, why not have a cone. Seems to make sense to me. These part of the discussion prompted concerns that too many staggered signalised crossing are difficult to navigate by visually impaired people and straight through crossings were preferred.

We then spent some time debating how tactile paving is used with cycling schemes. Many people felt that mixing people walking and cycling was not desirable and separated infrastructure was required which was a bit difficult to get away from when the discussion was about using tactile paving to deal with segregated and non-segregated shared-use cycle tracks. There was less consensus here and probably not worth going into detail about to be honest.

I will be looking out for the consultation by the DfT as I want to raise the need to provide some design guidance on detailing and construction to avoid some of the poorly built layouts which require constant maintenance. By this I mean giving practical drawings showing how to properly cut tactile paving units, how to avoid diagonal cuts (which get used when ramp gradients are not properly set up) and how to bed the paving units to stop them breaking up (lay on concrete or mortar on concrete, never sand). Happy paving!
Posted by The Ranty Highwayman at Saturday, February 28, 2015