Cycling Embassy of Great Britain AGM 2019: The Journey Is Starting In Cardiff - Part 1

Last week's blog post didn't get written because I had the pleasure of attending the Cycling Embassy of Great Britain's AGM. This year, we were in Cardiff.

What this means is there will be a double edition of the blog this week, starting with a look at the city's new cycleways. The current plan is to provide 5 new routes to connect people to the centre with (according to the published plans) a circular route linked them together in the city in the future.

What is possibly even more exciting is how these cycleways are just the start of some very dense work for the city as set out on its integrated network map which itself has come from the Active Travel (Wales) Act 2013 which to cut a long story short requires Welsh councils to develop and implement walking and cycling upgrades to a least a minimum standard.

Cardiff appears to have embraced it and is putting cycling at the heart of its development planning as the city knows it cannot accommodate more traffic. According to the draft cycling strategy, Cardiff will be 50-50 between cars and sustainable modes by 2026 with cycling being 18%. This is pretty ambitious stuff! 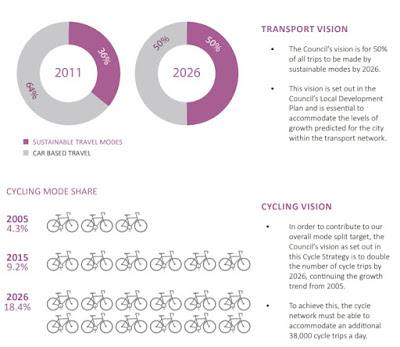 So, back to the cycleways. The first route which heads north out of the city centre has its first 1km under construction along Senghennydd Road which runs next to Cardiff University and Cathays Station and impressive it looks too as can be seen here in this image from the Council's scheme information with a works plan here; 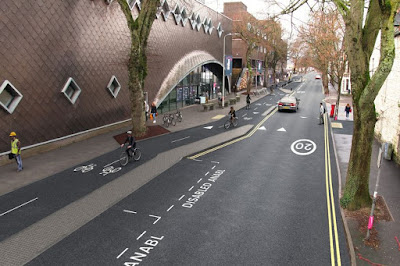 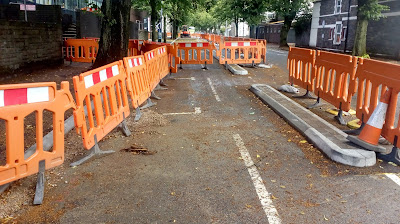 The 2-way cycle track is kerb-protected with the remaining carriageway still providing lots of space for parking and general traffic, with hopefully more of an inducement to stick to the city's extensive network of 20mph streets. At the junction of Senghennydd Road and St Andrew's Place, the scheme continues with a new (not quite finished) zebra crossing as it turns the corner; 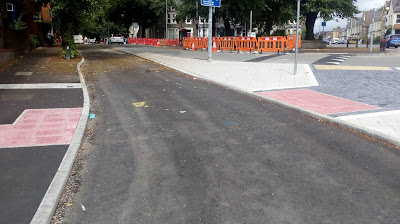 Then on St Andrew's Place itself, some reworking of the street connects St. Andrews Crescent with Park Grove via some contraflow working and a parallel zebra crossing; 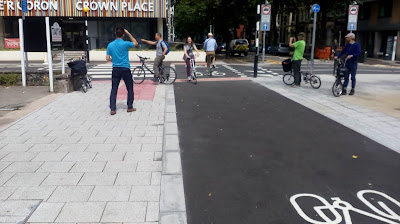 The route continues via St. Andrews Crescent and ends at the wonderfully named Stuttgarter Strasse which is a dual carriageway A-road, but can be crossed by using the existing toucan crossing, but unfortunately, that's where things stop and because the adjacent Windsor Place is one-way, it is not possible to continue into the city centre from this route. There clearly is work still to be done in that regard.

I'm not convinced about the use of corduroy tactile paving at the cycle crossing point on the parallel zebra crossing, but it is the same level as the footway, so I have to assume it's attempt to assist visually impaired people - I'm happy to be told it's helpful by those who need it of course.

Here's a little film of the work so far;


The other scheme for this week is a cycle track which has been built on North Road, or rather from some repurposed parking next to Bute Park. I had originally thought this was another Cycleway project, but it's not officially.

North Road is the A470 which eventually connects to the M4 and it's not somewhere you would wish to cycle. To the south, the route actually connects to a route through Bute Park and at the north, it joins an existing shared path which then goes back into the park. About half way along, one can cross North Road into Corbett Road.

A little further to the east, Corbett Road will become part of CW1 (when the next phase is built), but it does connect to the north end of Senghennydd Road via a toucan crossing. The crossing of North Road is via toucan crossings which isn't wonderful and Corbett Road isn't pleasant - unless you realise you are meant to use the shared footway and toucan, you can get caught by a left turn signal (see film below). This junction really should have had proper protected cycling space rather than lumping walking and cycling together.

However, there is the very start of a local network forming here and I hope Cardiff seizes the initiative and does some more local filtering with cycle tracks on the busier roads. 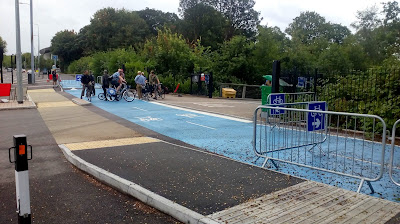 The photograph above is the cycle track as it crosses an entrance to Bute Park - this really should have been more engineered in favour of walking and cycling. On the day, there were event vehicles being taken into the park and so barriers rather than traffic marshals were used to slow people cycling down.

The photograph below shows how the space was actually won - it was taken from a long and skinny car park which runs along North Road (and they did take away parking spaces). The cycle track is left, then a footway stepped up and then the car park stepped down. North Road is to the right. 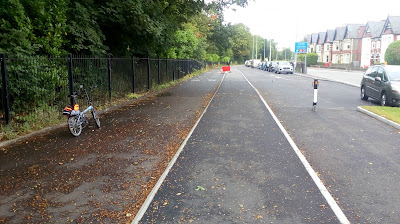 It would be usual to put the footway behind the cycle track and so here, I assume this was done the other way round so people getting out of cars and walking on would use the footway rather than the cycle track. You'll notice the bollard and in fact, the car park could have been used as a filtered service road, although the cycle track does of course avoid people driving in and out of parking spaces. I think it works well.

I'll leave you this time with a film of the scheme;

Posted by The Ranty Highwayman at Wednesday, July 24, 2019