I'm looking across at the mainland again this week towards Sweden and the country's Vision Zero programme.

Sweden is held up as a progressive nation when it comes to dealing with road death, but it wasn't always the case with road death being treated as an everyday occurrence. The change in approach came in 1995 when five young people were killed in a crash on the E4 motorway in Stockholm. The driver of the car they were travelling in ended up crashing it into a lighting column foundation and it was this event which started the country on the road to Vision Zero.

The incident caused Claes Tingvall, the traffic safety director at the Swedish Road Administration, to start thinking about the country's approach to road safety which placed the blame for crashes with victims. Tingvall begun to think about the issue after he was told that the foundation was simply going to be replaced without any thought about preventing a future occurrence.

Tingvall and his team wondered why it was only the road system where victims of crashes were blamed rather than the system as was the case with aviation where risks are systematically designed out. His team proposed designing out what is dangerous.

He considered three basic points which are the basis of Vision Zero;

By 1997, the Swedish Parliament adopted Vision Zero (despite some being against it) as policy. The simple position was that nobody should be killed or seriously injured on the road network and that it was the job of professionals to design safe systems - both vehicles and roads.

Tingvall and his team started to systematically look at what was killing people on Swedish roads and it turned out to be head-on collisions on high-speed single carriageway roads. The traditional solution was to dual the roads and build central reservation barriers, but clearly this is a very expensive undertaking in terms of land and construction, as well as not being needed in many cases from a capacity point of view. Tingvall proposed converting the roads to 2+1 operation.

The 2+1 layout essentially divided the existing roads into three traffic lanes (the high speed roads were already wide). Two lanes would run in one direction with one in the other and the directions would separated by a flexible safety barrier which could absorb energy in the event of a collision.

Every so often, the arrangement would swap to give drivers a chance to overtake slower vehicles. Where left turns (UK right) were needed, then protected turn lanes would be provided within the same alignment, but generally not within the two lane direction (so people didn't have to turn left from a "faster" lane - grade separation is the solution for multi-lane layouts). Here is Tingvall's original 1995 sketch;

Looking back at the idea, it seems to ridiculously simple and a space-efficient solution. Sweden doesn't have a dense motorway network and so many of the roads we're talking about are part of the national road system. They are important for long distance traffic, but where there isn't the need for high capacity. There are some dualled Swedish motorways as well as some operating with the 2+1 layout.

Of course, the 2+1 approach allows regular overtaking of lorries, so there is some capacity gain over a conventional layout where risky overtaking takes place.

There was significant public resistance to a plan to trial a 2+1 system, but against the backdrop of having his job and reputation on the line, Tingvall was allowed to proceed. The trial was taken forward on the E4 north of Gävle which had a high level of fatalities and it was a huge success. The system has now been rolled out all over Sweden with high levels of public support and as driver, it is a safe and easy layout to cope with. 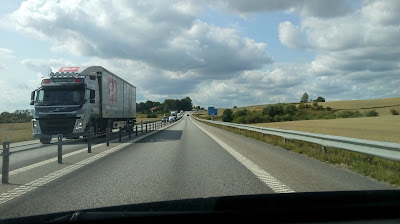 The photograph above is the E65 Malmövägen, near Ystad. There's one lane in each direction at this location, but you can see the barrier and there's a separate right left lane ahead. The central barrier is pretty much always wire rope which has some serious stopping power;


There is controversy with wire rope barrier in that it can kill motorcyclists who come off their bike (and slide along the road surface) and either hit the supporting posts or slide under and into oncoming traffic. Motorcycle groups and safety professionals are somewhat at loggerheads over the issue, but that's a whole discussion in its own right.

In parallel to developments in road design, the Swedish also started to look at vehicles. For many years, vehicle design was being looked at by European governments and in 1996 the Swedish National Road Administration (SNRA), the Federation Internationale de l’Automobile (FIA) and International Testing joined a programme which is famously known as Euro NCAP.

One criticism of the modern Vision Zero approach is that does in some cases rely on road users following the rules which can be challenging where people are determined to break them. The concept has also been criticised for being too focused on protecting drivers from each other and themselves at the expense of people walking and cycling, although to some extent this is possibly because initial work was dealing with head-on collisions.

The other issue is that concentrating on pure numbers of deaths and injuries is that it doesn't necessarily look at risk exposure, especially for those outside of motor vehicles. If you've scared or taken people off the streets, then they aren't going to show up in the data. Risk exposure looks at the likelihood of collisions based on distance or time travelled.

However, modern Vision Zero has evolved in Sweden it is now summarised as follows;


Some of the typical engineering measures which have developed from Vision Zero in Sweden include; 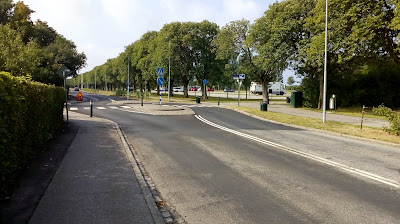 The photograph above is of Strandgatan, Malmö. A local distributor road with a 50km/h (30mph) speed limit. A crossing point for walking and cycling on a wide refuge within a chicane to slow drivers.

Of course, this is not the end of the story. One of the collision factors the Swedes are going after is drink driving. It's a stated ambition that the country wants to introduce alcohol interlocks to stop people being able to drive over the limit. They're not there yet, but a scheme to stop drink driving has been rolled out at the port of Gothenburg.
Posted by The Ranty Highwayman at Saturday, February 01, 2020