BUT IT'S GOING TO COST A FORTUNE!

a technical question in the office quite often turns into a wider discussion, debate or indeed a rant. what started as a question about how to build a small access to a site ended in row over spending money civilising neighbourhoods where the driver becomes the visitor.

Many people are aware that the roads system in the UK is pretty much set up these days to service motor vehicles. Many people are happy that the roads system is geared towards vehicles and feel that motoring-related tax should be hypothecated to spending on roads (I am not going anywhere that one). But there are many people who are fed up with car-dominated neighbourhoods and realise that something needs to change and this is where the debate headed. I am not anti-car, they are a great tool, but I want to see things reworked to put walking, cycling and indeed public transport on a more equitable footing. 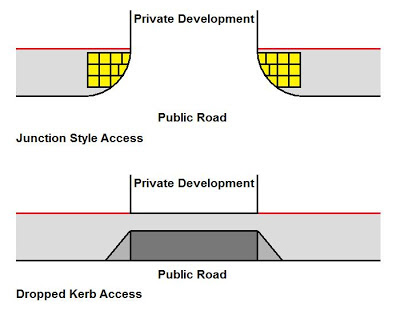 The question developed into a debate about my suggestion that we didn't need to build a site access like a road junction, it could be a simple dropped kerb to send a message to drivers that they were crossing the pedestrian's domain.

I went on to show some colleagues images on Google Streetview of how other countries had taken the simple concept much further and applied it to junctions serving much larger areas.


It doesn't take long to find what I mean on the outskirts of Amsterdam where the footway and indeed cycle track continues with priority and those driving into and out of an access serving a residential area are expected to give way to them.

One of my colleagues wondered why we would want layouts like this. I said that they would civilise our residential areas and make drivers feel like visitors which can help with reducing speeds, and improving subjective safety. I then explained that if the estates were self-contained instead of having roads through to other places, then the only traffic in each little area would be either those who live there, those who are visiting and of course deliveries - we would get rid of rat running.


My colleague was concerned about the cost of making these changes - "but it's going to cost a fortune". Well, retrofitting existing road layouts will need funding, but building civilised layouts for new build should not cost more than the "traditional" approach. Of course, building densities are high in new builds and developers do not want to build any more road than they need to.

It means that if we introduce protected facilities for cycling, then in many cases an access road may need to be one way. The immediate roads serving a group of dwellings probably don't need any protected infrastructure for cycling and so long as the estate is permeable for walking and cycling, we have a ready made low-speed civilised neighbourhood and the construction work will be the same as for the traditional approach.

To build a new estate road, one can work on a cost of around £210 to £250 per square metre depending on ground conditions; (the poorer the ground, the thicker the road, the higher the cost) and this makes an allowance for drainage and street lighting. This rate also assumes that some of the area will be carriageway and some footway. If an access road is made a one way loop, then the cost of a reduced width of carriageway can be used for cycle tracks.


For a retrofit scheme, the costs can vary wildly, especially when utilities are encountered and need diverting. Converting carriageway to footway or cycle track will cost in the region of £150 per square metre for a tarmac or block paved finish. Add £10 per square metre for a coloured surface and £50 or higher for natural stone.

Where we are looking at schemes such as the London Cycle Network (LCN), it is no wonder that lots of it is just white paint and logos when we are looking at around £1 per metre of cycle lane, £20 per cycle logo and the £10 per square metre for a bit of green surface. The routes were developed and installed on the cheap with nowhere near the amount of money required to provide facilities for all. The engineers who installed the LCN were set up to fail by those making the decisions on where money should be spent.

Take the example of High Street, Seven Kings which I have mocked up as having the Copenhagen treatment. This is LCN Route 12 which runs from (nearly) the M25 to Stratford before becoming Cycle Superhighway CS2 between Stratford and the City (well it fizzles out just after Aldgate East). The pair of routes together are some 16 miles (25km) in length and apart from the odd section of cycle track and a bit of mandatory cycle lane/ bus lane (part time) it is all paint and logos.


If we were to upgrade this route to a protected cycle track in each direction, 2 metres in width and at £150 per square metre, we are looking at £15 million and that doesn't even cover the junctions - perhaps a budget of £30 million might be more reasonable. So, "it's going to cost a fortune" isn't it? Well, no, I don't think so. It is all about priorities. LCN 12 and CS2 run parallel to the Shenfield to Liverpool Street railway line (which will also be part of Crossrail) and while I am not suggesting that those on the eastern end of the route would cycle to the City, those closer could easily do it and decent provision would help with local utility trips or commuting between the various town centres along the route (Romford, Ilford and Stratford) and it might take pressure off a very crowded railway corridor.

Compare my off-the-cuff £30m with the New Bus for London which will cost £200m for 600 buses, the Government's £170m "Pinch Point" fund, £1.2bn to £3.04bn for a Lower Thames Crossing (see 9.2 on this link) or £32bn for HS2. I think that investing in retrofitting for cycling (and walking) represents excellent value for money on the engineering alone and then we have the other benefits in terms of health, social exclusion, personal mobility and a reduction in pressure on other modes of public transport. Oh, and it will create construction jobs.

One of the things I like about my job is the debate it often generates, but it is a pity that these sorts of debates don't play out in the popular press, TV or with our elected representatives at all levels. If all new developments were designed for walking and cycling from the start, we would lock in civilised neighbourhoods and never need to spend money reworking them. If we spent our limited funds of measures which would make a difference to people at a very local level, then we could avoid spending money on huge political vanity projects. Perhaps that is the problem - a cycle by-pass at a traffic signalled junction is never going to be a newsworthy or political photo-opportunity - a new railway is.
Posted by The Ranty Highwayman at Saturday, June 15, 2013