Cycling In London: What Could Be Done Now

after the 5th cycling death on London's streets in 9 days, people who use bikes are understandably more angry and frustrated than ever and they are demanding immediate action. What could be done quickly to change our streets?

Cast your mind back to this time last year. The Great & The Good were patting each other on the backs about a huge sports day going wonderfully well (OK, I did get into the Olympics a tiny bit - mainly the road cycling!). What made the Games run so well was in part due a tonne of organisation in the run up to make sure the transport worked and that included the road.

Casting my own mind back even further, a year in advance, my monthly traffic liaison group meetings (where people like the emergency services, London Buses, highways bods and so on meet to discuss operational issues) had a standing agenda item for the Games with a fair amount of time devoted to the Olympic Route Network (ORN) which was arranged to help speed the "Games Family" around London by road, including "Games Lanes" - like bus lanes, but for Games people only, even cyclists were banned.

The ORN was under the management of Transport for London, but was implemented by powers given to the Olympic Delivery Authority (ODA) by the London Olympic Games & Paralympic Games Act 2006. S10 of the Act gave the ODA powers and responsibility for drawing up an Olympic Transport Plan. S11 gave the ODA the ORN powers where designated by the Secretary of State. Finally, S12 required any authority which normally looked after a road designated as ORN to cooperate with the ODA. There were other sections to deal with Traffic Regulation Orders, enforcement and road closures.

In other words, here was something definitely of London-wide importance and of course significant for the UK, which needed all London traffic authorities to cooperate with by law. In other words, we are able to debate and negotiate, but the ORN is coming, best get used to it.

There were complaints and objections that this was being done to keep the International Olympic Committee happy (well it was) and that the draconian powers would ride roughshod over the ordinary punter (it did a bit). But, the whole think went of pretty much perfectly in terms of a transport plan.

So, back to my monthly meetings. I remember a traffic copper moaning that there were Games Lanes on some pretty major routes and emergency vehicles were not allowed to use them. I cannot remember if they were allowed or not in the end and certainly the ORN was not used as much as the original proposals suggested; but the huge transport PR build up and planning paid off. Even in Outer-London where there was mainly little Games-related stuff, risks were planned to make sure there were no hitches. The detail was actually all put in place within a year of the games starting, despite having the Act in place long in advance.

OK, on a different tack. What happens when a water main bursts in Central London? (and they do quite a bit). Do people sit in stuffy rooms discussing how best to repair the main? Do they come up with an action plan? Do they suggest producing design guidance? Do they hold a Parliamentary Inquiry? Of course not. Out come the cones, roads are closed and an army of people in yellow vests get on and repair the main.


Where there is a utility burst or failure, where a bridge develops cracks or where there is a building fire, roads are just closed. Believe me, I have "just" closed roads many times over the years because of immediate danger to the public. The traffic is managed around the scene and it might cause congestion. If the incident goes on a long time such as what happened with the Hammersmith Flyover, drivers adapt and things reach a normality relatively quickly (and huge lumps of cash can be found if a big traffic bridge needs mending!). If things are closed or restricted for any length of time, the local highway authority will follow up and put a temporary Traffic Regulation Order in place (or the quicker "notice" version which can be used in an emergency).

The other thing to note is that if a utility, a highway authority or even a developer are planning a scheme which needs road space on a temporary basis, all sorts of temporary arrangements are possible such as barriers and cones, traffic diversions, temporary traffic signals (including push-buttons), steel and concrete barriers, lighting and so on. The basics are covered in "Safety at Street and Road Works", but more complex layouts are possible.

(a) because works are being or are proposed to be executed on or near the road; or

(b) because of the likelihood of danger to the public, or of serious damage to the road, which is not attributable to such works; or


(c) for the purpose of enabling the duty imposed by section 89(1)(a) or (2) of the Environmental Protection Act 1990 (litter clearing and cleaning) to be discharged,

the authority may by order restrict or prohibit temporarily the use of that road, or of any part of it, by vehicles, or vehicles of any class, or by pedestrians, to such extent and subject to such conditions or exceptions as they may consider necessary.

The traffic authority for a road may at any time by notice restrict or prohibit temporarily the use of the road, or of any part of it, by vehicles, or vehicles of any class, or by pedestrians, where it appears to them that it is


(b) necessary for the reason mentioned in paragraph (b) of that subsection,

that the restriction or prohibition should come into force without delay.


The important ones are 1(b) and 2(b). Essentially, something is needed because of danger to the public (which has nothing to do with road works) and the use of the road or parts of the road can be restricted - hold all of this in mind.

In terms of numbers of trips made, or distance travelled, cycling remains numerically safe, but this is not the whole picture as people don't feel safe - this is subjective safety and it is a huge barrier to overcome. The media reporting is interesting, as for the first time it seems cycling deaths are getting the kind of coverage that one would get for a rail crash. The difference is that with a rail crash, speed limits and temporary measures come in immediately until more is known about the causes.

Rail systems and procedures are refined over years  and this mean that a rail death is rare. With roads, the police are put under immense pressure to get things reopened and "back to normal" as soon as possible. Certainly, crashes on motorways are heavily politicised because of "economic impacts". Highway authorities often (but not always) act in response to a crash where a police incident investigator raises an urgent issue such as worn road markings, surface defects, blocked visibility and the like. With a death, a Coroner will sometimes comment or report that things need to be done. Clearly an inquest is an ordeal for those left behind, but as a professional I can tell you that giving evidence at one was the worst day of my career and I don't care to repeat the experience.

So, where do my ramblings get us and what do they have to do with people getting killed when they are just trying to get around on their bikes? Well, my point is that despite the technical reports, the safety audits, the press coverage, the outrage, the Coroner's view and all of the opinions given about cycle safety, people are getting killed, people are angry and people are demanding change.

Those who have followed my posts will know that I think we should be planning things properly and dealing with the difficult issue firsts, but even I will admit that as far as places like the Bow Roundabout and the A11 go (Cycle Superhighway 2), there is an immediate danger to the public and we have an armoury of legal processes which we can put into action within a few weeks (with proper care). We can ban some of the left turns, we can cone or barrier protected cycle lanes, we could rearrange the traffic signals at Bow to give push-button or fixed time to cycle (and pedestrian) only phases, we can introduce 20mph speed limits. If some layouts don't work, we can tweak them. We have experimental traffic orders to play with and in fact, we might learn something as we go. This could start to address some of the serious actual and subjective safety issues and perhaps even show what latent demand there is for safe and protected infrastructure. 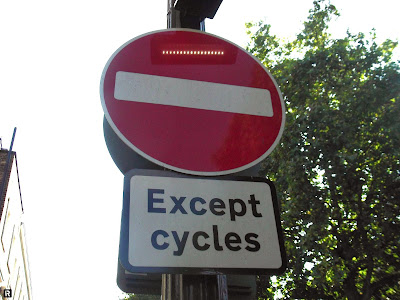 Longer term, the Government, like it did with the Olympics, could compel the London boroughs to cooperate with Transport for London on pan-London issues for cycling safety and allow TfL to properly designate key cycling routes or areas which boroughs would need to accept or challenge through a proper and transparent process. The Government could push legislation to exempt pedal cycles from many aspects of traffic regulation (in the way they did to make no entries and contraflow cycling easier in terms of traffic signs). They could resurrect Cycling England to promote and coordinate best practice. They could even go the whole hog and create an active travel act in England!

Over the coming weeks and months, there will be more protests. There will be debate between those who want unrestricted motoring to remain and those who want active travel, but above all, nothing will happen unless and until there are politicians ready to stick their necks out to make things happen.
Posted by The Ranty Highwayman at Thursday, November 14, 2013