I posted a couple of photos on Twitter the other day showing an alleyway which besides being utterly hostile to people on bikes, was quite literally a barrier to many other people. 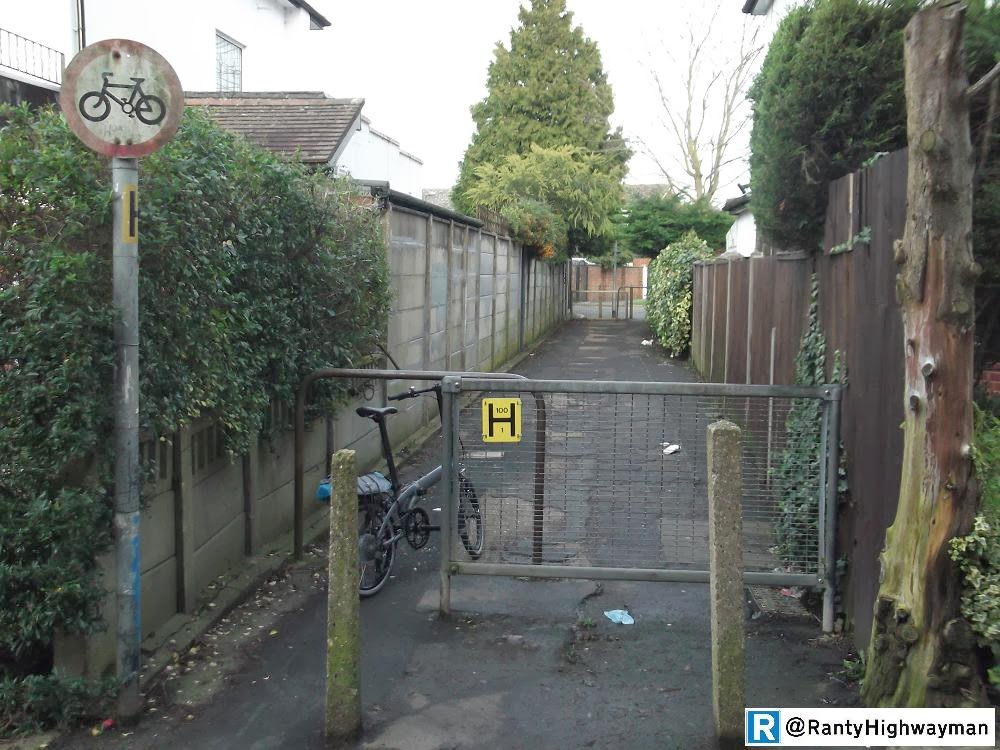 I came across the alleyway on my way home from a site visit. So as it is on my patch, I need to do something about it (more on that later).

Despite thinking I know my area, I am still finding little corners, more so since I have been getting round by bike as it is sometimes nice to get off the main roads and away from the traffic.

This little alleyway basically runs between the end of a small residential estate with no through roads and a service road to a much bigger road. The much bigger road has a wide footway and despite not being a designated cycle track, people cycle along it anyway. The little estate is flanked by another road which is more of a local kind, but still busy and so the alleyway and the estate is a welcome and quiet potential alternative.

The alleyway is a touch over 3 metres wide and about 40 metres long. It needs resurfacing and the lighting isn't great. However, the worst thing about it is that it is barricaded at both ends. Nominally, no cycles are allowed, but the clutter will either prevent many other users using it or at least make life difficult.

People using mobility scooters will not get through and anyone using a wheelchair might squeeze past. People pushing prams and buggies will struggle with the hoop. Blind and partially-sighted people will find the route difficult, as would people using sticks. 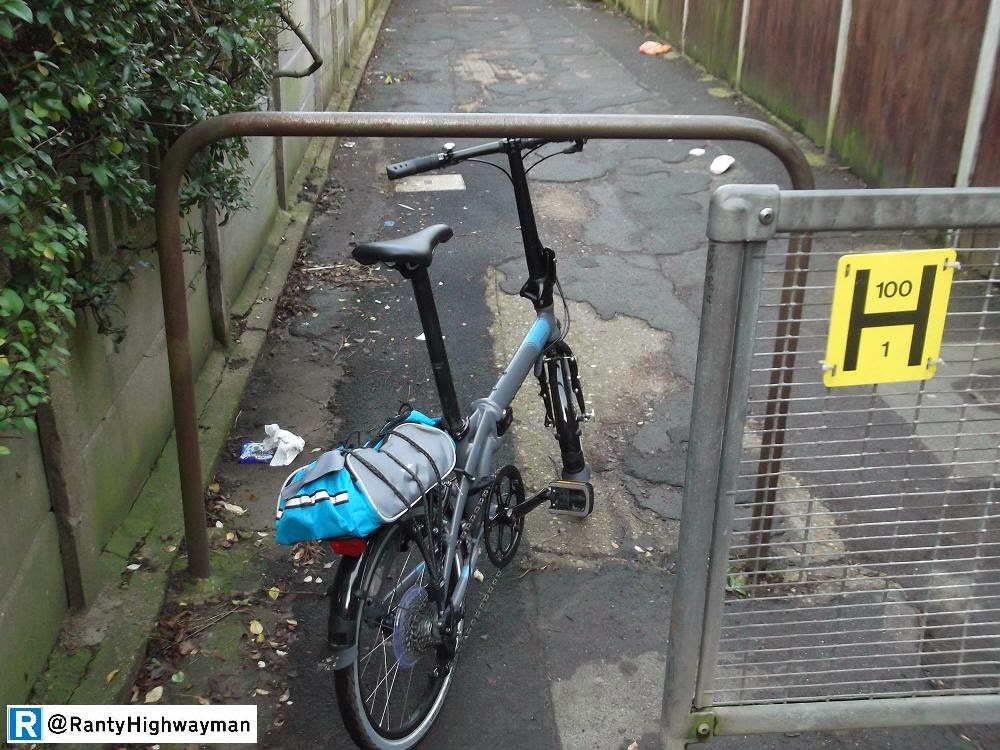 I showed the photos to a colleague who was an erstwhile installer of odds and ends of street furniture (and whom I could get going into a debate!) and I suggested that the whole lot should be ripped out, the alleyway resurfaced and the no cycling sign removed - in short, make it fully accessible to all. He recounted past arguments with residents who wanted barriers put in to stop yobbos and mopeds and bikes whizzing though, although he would remove them again on complaint from a disabled person.

I am not going to criticise him too much because we (in local government) are often put under pressure to do "something" and a barrier is cheap and easy to do (that is a whole post in itself!). We are often beaten with the stock phrases of "an accident waiting to happen" or "will you wait until someone is hurt". The phrases are used too much by people with their incandescence; although I am respectful of people who make the same point without resorting to this type of language.

My own view is that we should start without the clutter and if anti-social behaviour becomes an issue, that should be dealt with rather than make life more difficult for people every day on the off chance someone might take a moped through and hit someone. Of course, this was never "designed" as more likely stuff was added over the years to deal with a problem long since forgotten about.

In the case of an alleyway like this, the only thing to stop is people driving along it in cars and a single bollard in a path this wide is enough. In fact at the other end of the alleyway there is a lamp column right in the middle and that would be enough.

Once I got back into the office, I checked the highways register (a map of which streets and ways are designated as public highways). The reason the "no cycling" sign is there is because the alleyway is a designated public footpath and so is defined in the Highways Act 1980 as:

"a highway over which the public have a right of way on foot only, not being a footway"

A bit of a bugger when you want to cycle, although it is not entirely clear cut if cycling is "properly" banned and my next job will be to check out the history to see if there is a bye-law or traffic order in place. CTC has a good summary on this issue here.

There must be thousands of these across he country and I accept some will not really by wide enough, but as well as not having the clutter in the first place, there is no good reason not to open up such routes for cycling. It wouldn't cost much and would be something we could do pretty quickly. 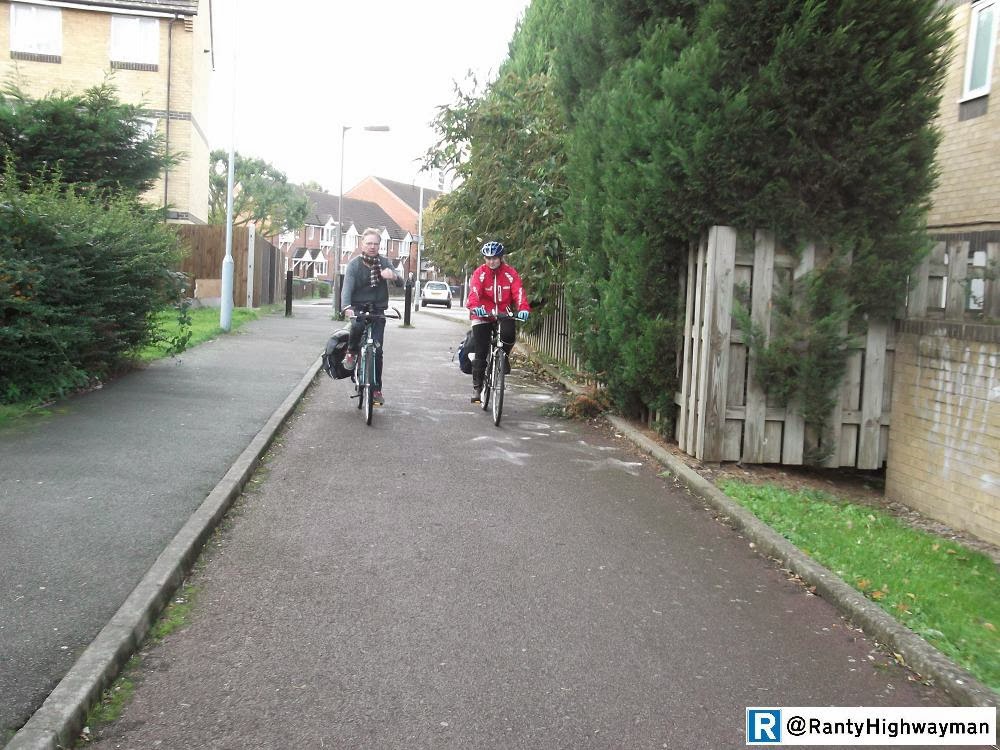 I will leave you with this photo of a little link between Sheppard Drive and Stevenson Crescent in Bermondsey which is an alley with a footway and a cycle track.

OK, much more space than at my site, but my point is that the area is not penned in at each end with clutter. I think it will take me a while, but crappy alley is now on my "to do" list as it doesn't need to be this way.

Update 27th January 2014
Well, here is another reason to despise the Coalition's decision to scrap Cycling England. It produced a handy guide on the legal processes for cycle schemes and handily included a description on how to use the Cycle Tracks Act 1984 which is aimed at converting or added cycle tracks to public footpaths (now you see why I am pedantic about the right terminology in my posts!).

Oh, I also added Crappy Alley to a list of small schemes and links which I will be bunging into the pot for annual funding bids for TfL Mayor's Cycling Vision schemes. To that extent, it is now on a "to do" list properly!

Posted by The Ranty Highwayman at Saturday, January 25, 2014