Going Local: How can campaigners and engineers work together?

this idea has been hanging around for ages following a question from @angus_fx back in october (thanks by the way!) - "what can local campaigners best do to help?"

The discussion was prompted by my post on the frustrations of bidding for funding against the Mayor of London's Cycling Vision which had the inevitable requirement for "quick wins". I was trying to explain that although slow progress is deeply frustrating, there must be situations where schemes should be planned over say a 3-year programme.

I mentioned that TfL were operating a 14-month lead in for traffic signal works, Network Rail 18-months for track possession and planning consents for major schemes took 13 weeks. In other words, people and organisations external to a project must be built into a programme and those developing schemes should accept this from the start. The tweeting went as follows; 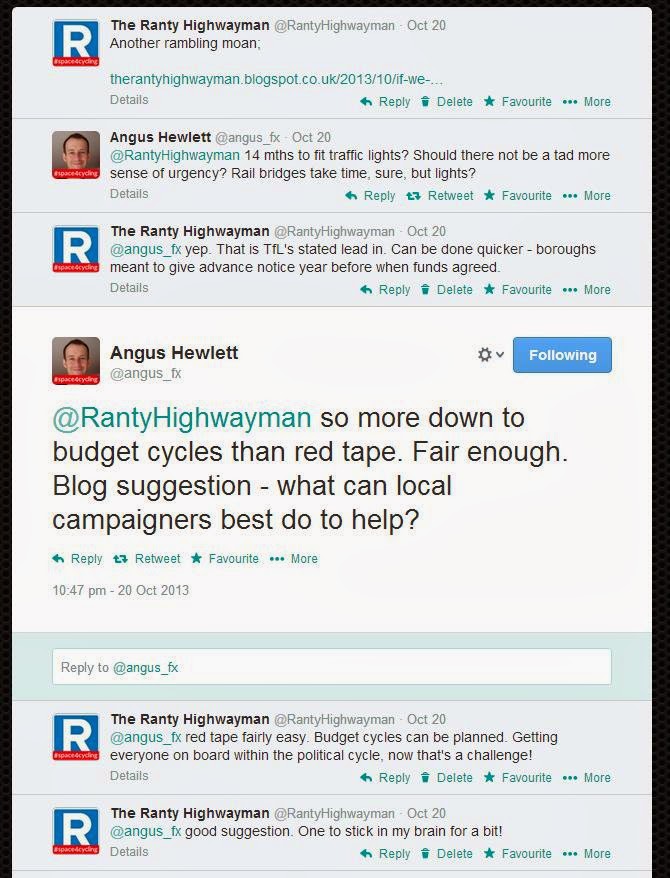 I probably wasn't fair in the way I put things across, but to be fair to TfL traffic signals people and Network Rail, it does take time to design and plan an installation and so the lead-in was not a criticism. The criticism was for those who get a suggested budget and programme from people like me. They then give people like me less budget and a much shorter programme and wonder why we get the arse-ache!

So then, local campaigners. What can you best do to help? There is a long list of things, but it is essentially for you to get an idea of how the "system" works;


There are loads of questions which can be asked about a project or the allied processes and my message is don't be afraid to ask and keep asking until you get an answer (even if you don't like the answer!)

As I explained above, engineers are often brought in to do a quick feasibility, but don't see the project again until they are told "here is the money, get on with it" - whether or not there is enough time or money. Perhaps the local campaigner needs to be pushing to be involved in that initial feasibility stage and indeed when the local authority's transport policy/ plan is being developed.

Local authorities will have various development and transport policies. Campaigner's could get to know the key points with regards to transport and push the decision-makers and designers to consider properly their own policies which can be ignored when it suits. The (development) planning process is key as developers and indeed the local authority development control staff may have no idea about what good looks like in terms of walking and cycling. These are the people making recommendations on planning applications which is key in getting space for walking and cycling prioritised.

Campaigners also need to think about who they are representing. I have had many an argument with local campaigners over the "right" width of advisory cycle lanes and whether advanced stop lines should be provided.

This is the wrong use of everyone's energy as both concepts are not going to especially attract new users, although existing users may appreciate them.

The focus of campaigning should be on getting local kids walking and cycling to school in actual and subjective safety. It should be about showing how changes to the streets can allow people to leave the car at home and do the same journey in a reliable time. It should be definitely be aimed at the politicians and decision makers so they know that there are lots of people fed up with the status quo.

I think what all parties need to do is to get away from the "them and us" mentality that we sometimes get. Engineers (and planners) need to be aware that local campaigners are often using up their free time and so they will want to use their energy in the right place. Campaigners need to remember that we are implementing the policies of the authority and that those policies are those of the particular bunch running the town hall.

We do get accused of making excuses for the schemes we build when they are seen as poor. I am not saying for a minute that local campaigners should compromise on what they want to see, but perhaps they need to understand that sometimes engineers have to compromise because of the funding, time and political constraints we are often under. Understanding if not acceptance. But, every time I think about the issue (and I do quite a lot) it all comes back to one thing and that is the schemes we get are a result of who we are working for. I will leave you with quote I made in the current Highways Magazine (yes, a shameless plug);

“Being an engineer is about being able to adapt one’s skills to new problems. Unless we are challenged by our leaders to change our approach as designers, we revert to type and carry on as before and this is just not going to deliver.”