A couple of weekends ago was the Annual General Meeting & gathering of the Cycling Embassy of Great Britain. We did some riding as well as talking!

In the second of three posts, I want to cover some of the other interesting things we saw cycling around Brighton & Hove. In the cliché of countless travelogues, it was a land of contrasts, but actually, there are all sorts of different road layouts which kind of show experimentation over several decades. So, in no particular order, here is some of what we rode.

North Laine
This is the area roughly south of Brighton Station (and I apologise if I get it wrong). It is a strange mish mash of tatty old streets and sleek redevelopment. The main thing is many streets are narrow and many are one-way with the area being in a 20mph zone, so there are various bits of traffic calming around.

We saw plenty of contra-flow cycling in the one-ways, even in places which felt quite narrow with oncoming cars, but it was OK and much of the back street traffic was only there for access.

Gardner Street is worthy of mention, not because it has been particularly designed for cycling, but that it seemed a reasonable place to cycle. During the day it is a pedestrian zone which bans motorised vehicles (so cycling is allowed) and out of hours, it can be accessed for deliveries and general driving (although it does seem to be an access street). During the day, pedestrians dominated and with the mix of shops it was buzzing.


Next up we have Jubilee Street which has two-way cycling (which a contraflow one-way) and is restricted to access only for motor traffic. It is a little smarter than Gardner Street, but seemed to have little going on. Still, nice to cycle along, even if there are delivery vans to dodge!

Then we have perhaps the nicest street we saw in the area which was New Road. This street is a single-surface shared-space. By single-surface, I mean that the highway is paved at the same level across the whole street and without kerbs. Shared-space means that pedestrians, cyclists and drivers all share the area - and this does not always mean a single-surface.

There is often a debate about this kind of scheme and views are often polarised. On the one hand, the hard-core urban designers and architect types enthuse endlessly about them. At the other, access groups worry about the impact on pedestrians, especially blind and partially-sighted people.


As is very often the case, it is all about context. Any shared space scheme where motorised traffic is able and allowed to dominate will never be successful. Pedestrians and cyclists cannot ever share the road on equal terms with traffic and so controls and limits are needed. In fact, unless there are controls and limits, it is not shared space - it might be very pretty, but it is flawed.

New Road does shared space well. Traffic can access the street from one end and really, the local road layout means that drivers entering the street are only doing so for loading or to access blue badge parking. Pedestrians dominate the whole space and drivers have to move through on pedestrian's terms. Cycling is allowed both ways and again, share the space on pedestrian's terms.

New Road is also pretty. The surface is laid out in various grey-shade granite blocks. There are some benches, street lighting and a couple of signs and that is it. It is a restricted parking zone (RPZ) which means no yellow lines anywhere. My criticism of the street is that it is only one within an entire city centre and will have cost a fortune (not to mention having some rock-star designers on the project!). It was part of a larger strategy to be fair, but the challenge is to do the same in "normal" materials


Seven Dials
The Seven Dials is a junction of 7 streets just north-west of Brighton Station. It used to be a tiny roundabout in a sea of tarmac. Pedestrian guardrail was everywhere to push pedestrians to the various pelican crossings in the side roads. Brighton & Hove City Council wanted to transform the area for several reasons and work was undertaken last year.

We were riding round the city looking at cycling infrastructure and I am afraid the first impressions were not good because traffic still dominates the space. But, compared to how it was before, it is so much better for walking and for cycling I guess there are views either way. As someone used to cycling in pretty grotty places, it wasn't too bad, but not a layout to use as an example to show someone who would like to take up cycling for transport.

The central island of the roundabout has been replaced with a much bigger area, which is more of a long oval. Footways on the edges have also been widened and the arrangement now squeezes traffic and will certainly have reduced speeds through the junction. The guardrail has gone and the crossings on the side roads are now zebras, which are much more flexible than pelicans in use for both pedestrians and drivers. 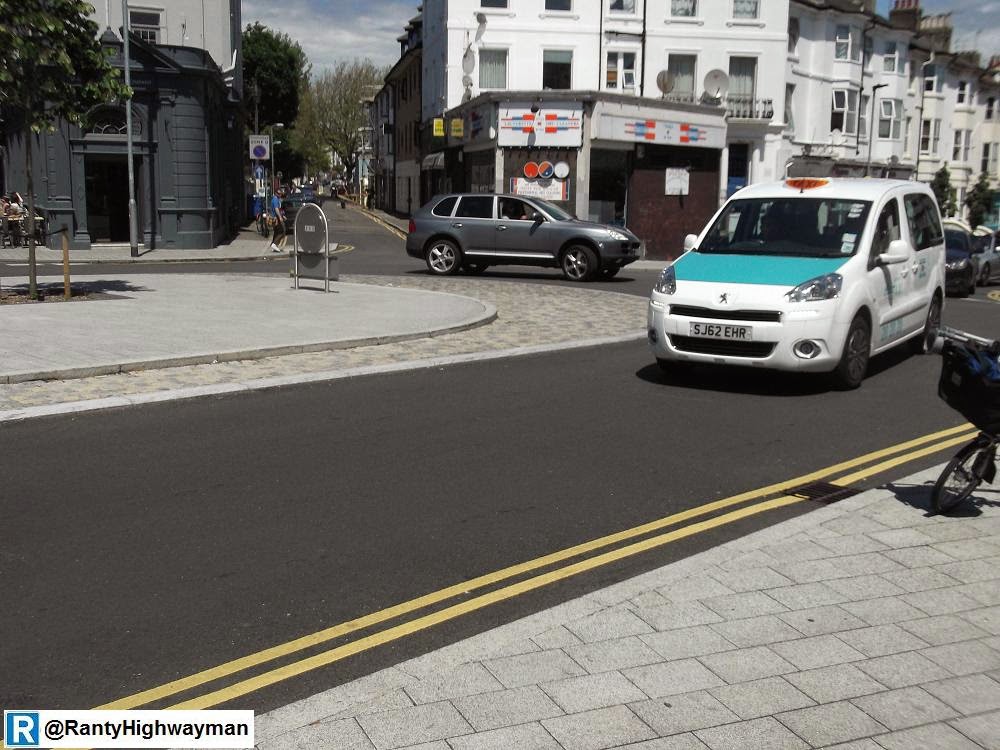 The central island area also has an over-run strip around it which has been designed to accommodate occasional large vehicles while keeping cars to the main carriageway. The strip has a kerb with a small chamfered edge as not to damage tyres, although I wouldn't want to catch my bike wheel on it.

I did notice some kerb movement in the over-run strip which is often a construction detailing issue which is often found where vehicles are able to drive over paving - tricky to get right.

It is a nice tidy job by and large, but not successful in traffic volume reduction, although it must be slower - I did jump onto the island to get some snaps and had to dash rather than walk. I did have the weird thought that there needed to be a couple of zebra crossings on each of the long sides of the roundabout to let people cross through the middle. 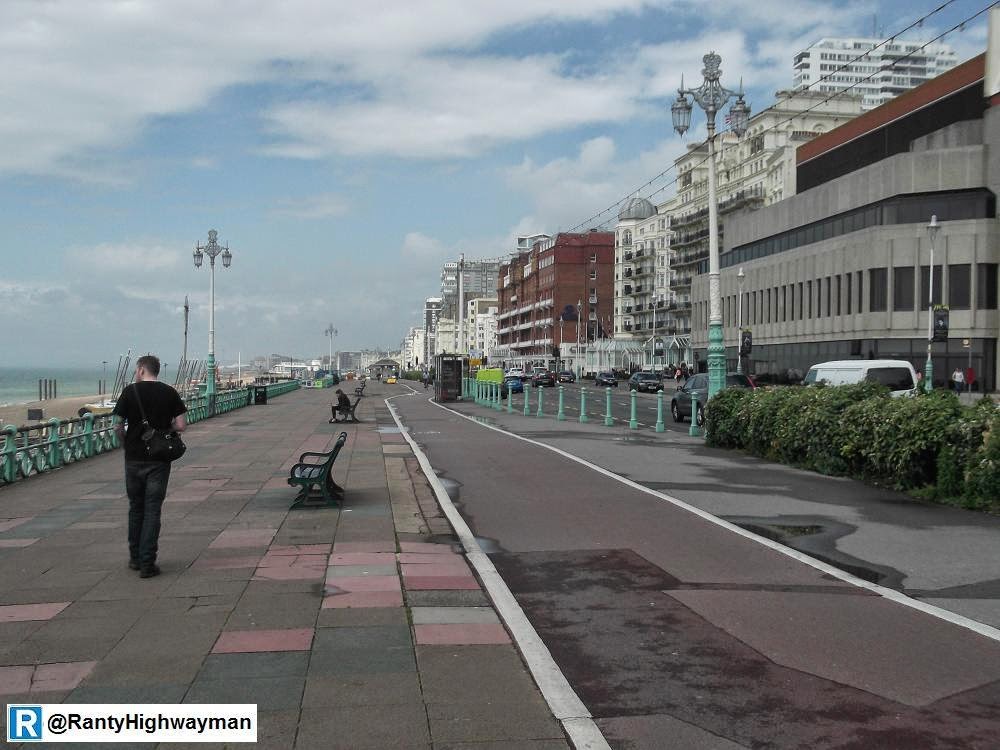 Kings Road/ Kingsway
These two roads form part of the A259 which runs east-west along the sea front and connects Folkestone with Chichester, although some parts are bypassed at other south coast towns. As for Brighton & Hove, it is not a place for comfortable cycling or crossing the road as much is dual-carriageway with staggered crossings and busy junctions. There is a section of cycle track on the seaward side of the road which has been there for many years. It is better than the road, but not really wide enough. There is no height separation and so pedestrians wander in and out without realising and so intimidating to some on foot. 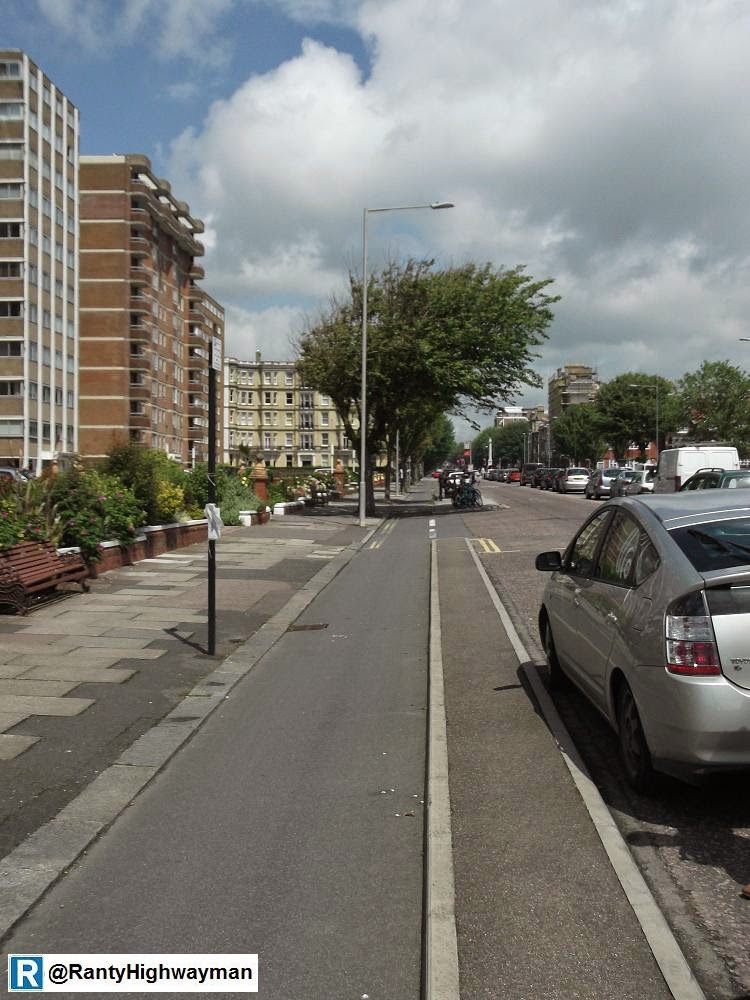 Grand Avenue/ The Drive
Running away from Kingsway, Grand Avenue is another dual carriageway, but with only one lane in each direction. I assume that years ago there would have been more lanes, but lots of space has been given over to parking bays. In addition, some of the space has been made into an island-protected cycle track (basically a long, skinny traffic island to protect cyclists from traffic).

The parking is on the outside of the cycle track and so it feels really safe. Passengers in cars can also open their doors without swinging them in front of bikes. Although I would have preferred 45 degree chamfered kerbs, the kerb heights either side of the track are low and so not too much risk of catching pedals.

Bus stops are treated well with the track going behind them and a gentle ramp bringing the track up to footway level where passengers cross back to the main footways. For people wanting to cross the road on foot, they can, but it means crossing the track, the road and parking bays. Anyone who needs a flush crossing point are at a major disadvantage and they are forced to use crossings at the signalised junctions along the street. 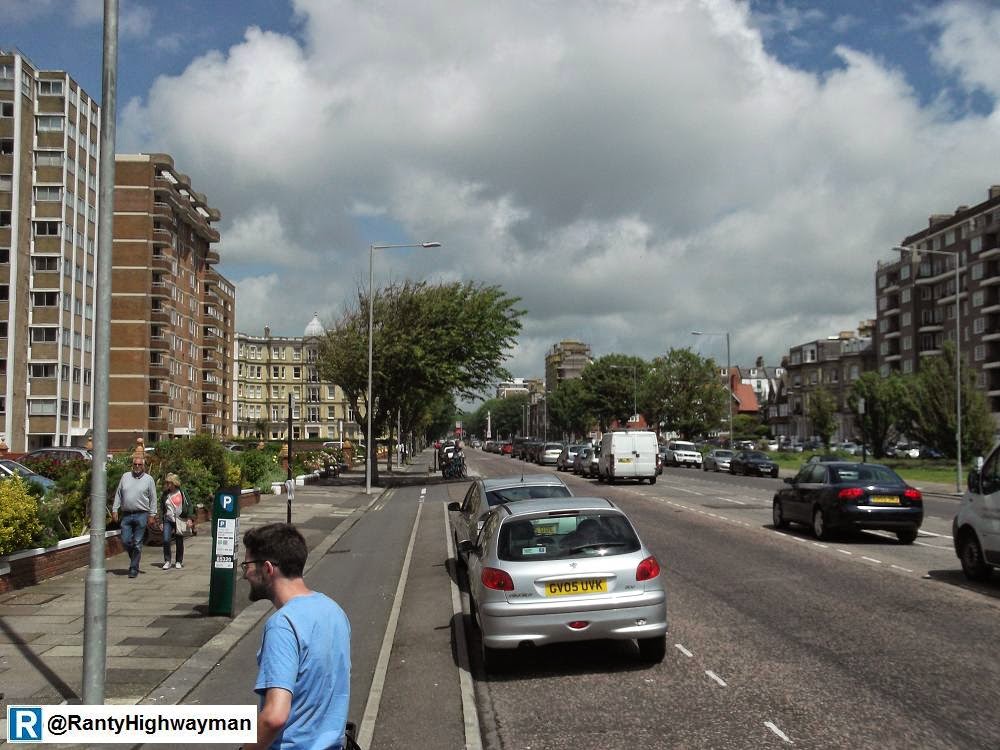 There are gaps in the protection island at accesses and on the approaches to the signalised junctions, the protect goes and we are back to painted cycle lanes (albeit mandatory), and staggered pedestrian crossings. The worst thing at the junctions is that cyclists are placed to the left of left hand turn lanes and so left hook is a big issue (some of our group experienced it first hand). The further north one goes on the route, the more patchy the protection which disappears into a mandatory lane at the junction with Old Shoreham Road - and that will be the subject of next week's post.
Posted by The Ranty Highwayman at Friday, June 20, 2014