Traffic Signal Pie: So Near, Yet So Far

I have covered stand alone signalised crossings before, but an issue popped up over the last few days which is worth airing in its own right.

Our story starts with a video posted by Matt Turner of the Great Gas Beetle blog showing a Puffin crossing within a large signalised junction in Sheffield which had recently been reworked (Streetview variously shows the old layout and works in progress). Before we proceed, watch the video for yourself;

When I first watched it, I couldn't work quite what the problem was, but clearly, people crossing ahead could see a green man shown on the Puffin display - a "near side" display (known as a Pedestrian Display Unit - PDU). The issue is that the green man is actually for the people using the crossing to the left (from where the video starts) with the ahead signal being on the right hand side of the crossing.

Puffin crossings, whether stand alone or within a junction have the PDU above the push button. When a green man is shown, you can cross - my earlier post went into more technical detail as there is pedestrian detection involved too. The push button is normally (but not mandatorily) on the right hand side as you face the crossing which is there for consistency for visually impaired people, but in terms of the PDU, it will normally be placed so it is on the side the traffic is approaching from and they are turned to if one looks at them, one kind of sees the traffic in the background.

In the Sheffield example, the crossing point in question has the PDUs on the approaching traffic side. The side the video is taken has the push button under the display (on the right), but for people crossing back, the PDU is in the left (as you cross) which is on the traffic approach side. For people crossing back, there is a push button on the right (for consistency), but also another on the left. Yes, it does all seem a bit confusing already.

The video is taken standing on a triangular island from which three crossing emanate, all with various posts, PDUs and push buttons which, on the face of it, are kind of set out correctly with at least a push button on the right and PDUs facing traffic (where displays are on the left, there is also a push button).

The underlying issue with the layout is that the triangular island is very small and so in terms of the "wrong" green man which is the subject of the video, it is positioned about the same (but mirror image) as the "right" display. Granted it is turned to face traffic, but as that traffic is coming through a central reservation, the "wrong" display is still very easily seen.

The original junction was laid out pretty much the same from what I can make out in Streetview, but the important difference is that it used to have far-sided signals (known as PedX crossings); 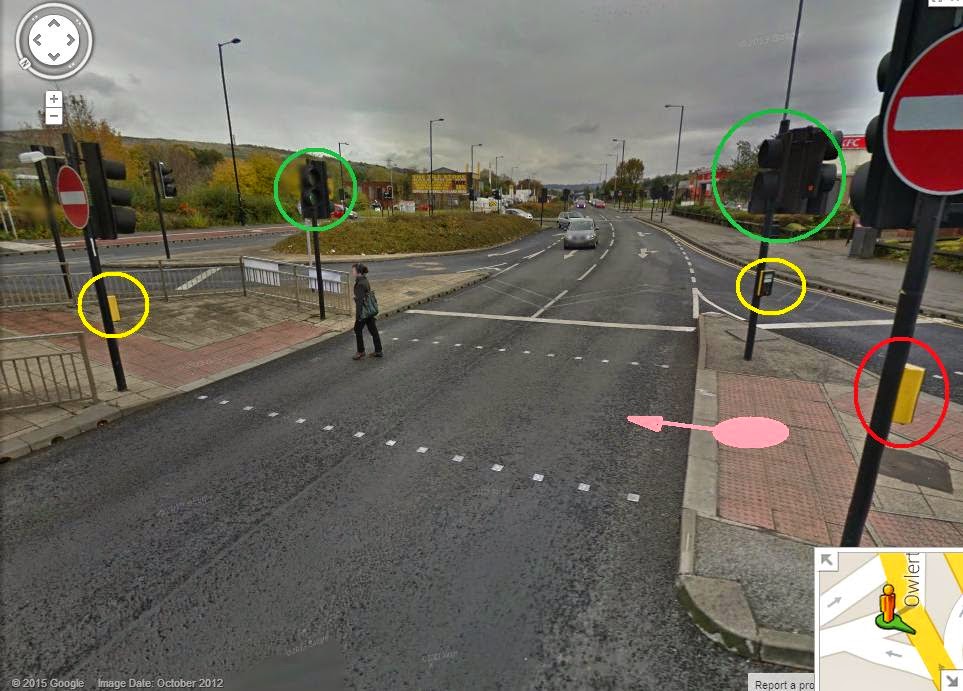 With the old layout, the implication of someone pushing the "wrong" button is that they will never get a green man at the far-sided signal they are looking at. They might think there is a fault and cross in a traffic gap, although given that traffic will be stopped at some point (to let other traffic movements go), a green man would come in automatically. The "wrong" push button might still be an issue for a visually impaired people who may not appreciate the button being on the left.

With the old layout, the triangular island is still small and so the "wrong" button is still in reach. The junction is very much laid out (was and still is) to maximise the throughput of motorised traffic and as is pretty much always the case with road layouts like this, pedestrians are given several crossings to negotiate, with very small islands to wait on. There are other layout issues, but I will stick to the signals issue.

Of the two layouts, although both poor for pedestrians, the old far-sided signal layout does not create the additional risk of someone mistaking the green man on the wrong signal as theirs. This issue has been debated on Twitter (well so far as you can) and it has been suggested that people should have been taught how to cross and where "their" green man is. I think that is nonsense because we are dealing with people who are fallible and besides, people don't always see official training on such things!

One of the big problems with Puffin crossings is that when they are busy, people not standing immediately next to the display simply cannot see the green man. Imagine this location is busy, some people won't see the red man, but they might see the green and assume they can walk out into live traffic. Where high numbers of people are expected, then a second, high level display can be provided, but it will never be as good as the visibility afforded by a far-sided signal. 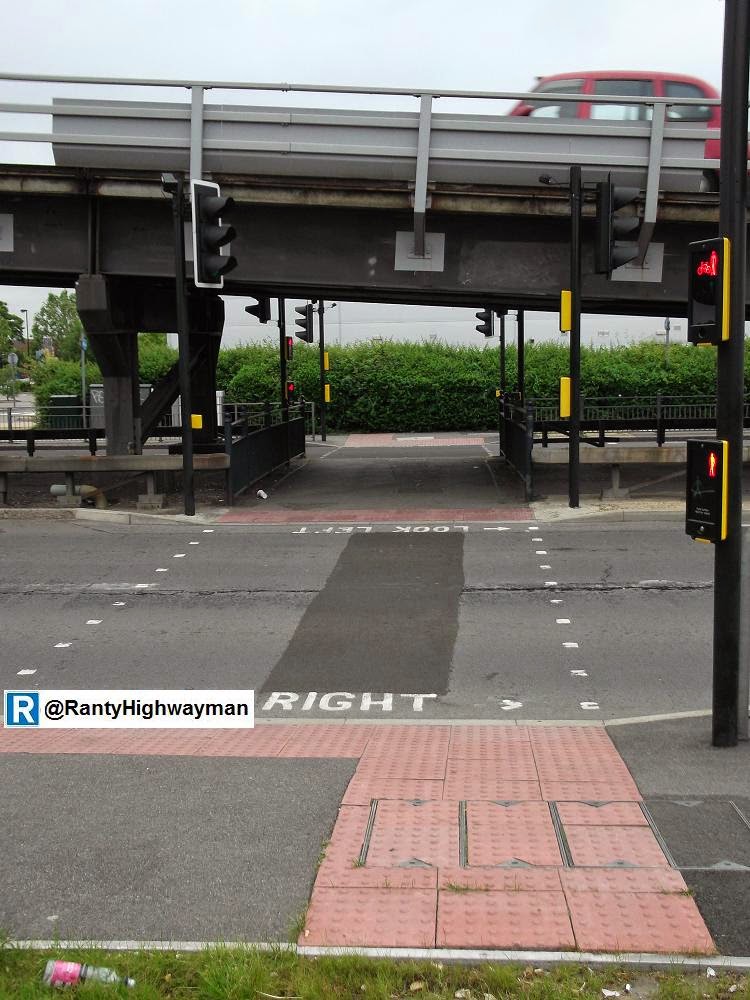 There are good reasons to use near-sided signals and that is where far-sided signals could be confusing. The layout on the left is a two stage non-staggered crossing - essentially two separate crossings (Toucans in this case).

If far-sided signals were used then there is the possibility (perhaps remote in this example) that someone crossing could mistake a green man in the distance on the second crossing as theirs. We can add louvres to the green men (so they can only be seen from the right position), but it is another maintenance issue and they just don't give the same clear view.

This example has a second set of higher level displays, but in reality it never gets that busy and so all in all, I think the right choice has been made in terms of the near-sided signals. 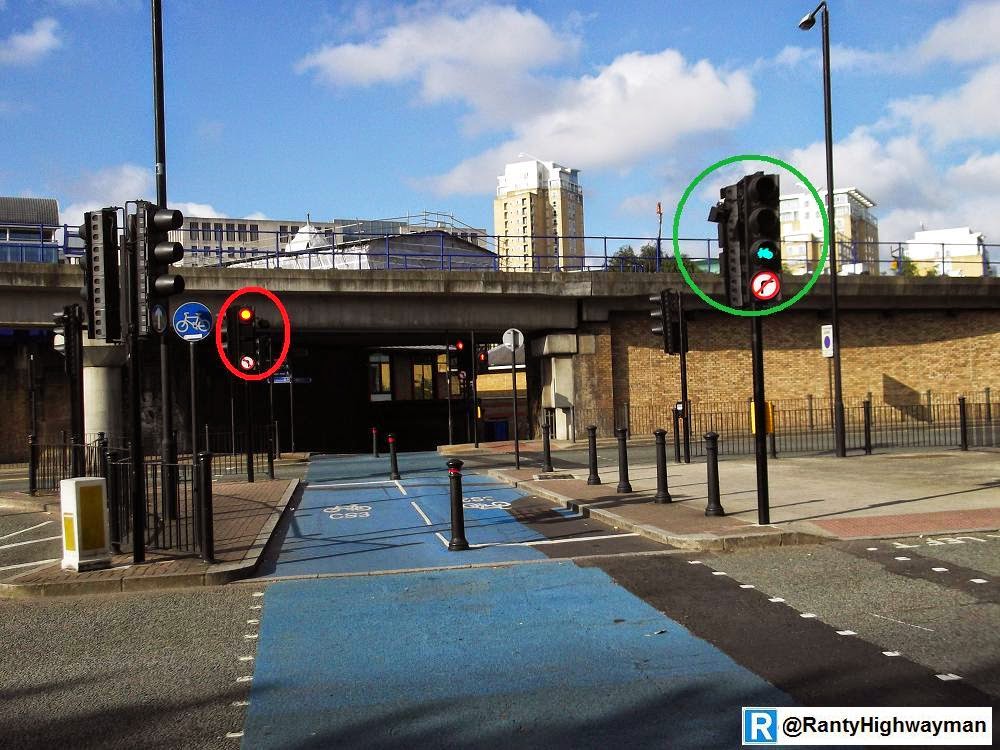 In this next photo (a 2-stage cycle crossing running parallel to a PedX crossing) it is possible to confuse the signal in the distance (circled) red as the signal for the first crossing. There is a signal for those cycling immediately at the crossing point, but it is up on a pole and so you are relying on the secondary signal circled in green. If the far away signal goes green, then again, we have a serious issue.

The lesson from all of this is that we must always take care that the right signal can only be seen by the right people and this follows for those driving too - there is a phenomenon whereby people's eyes can settle into a particular focus where things further away get noticed before things closer, with signals and PDUs this is called "see through".

What do users think about near side and far side signals? There is some research from 2005 by Transport for London which looked at the views of people using Pelican (far-sided signals) and Puffin (near-sided signals). The conclusion (of quite a detailed study) was;

In summary, Puffin crossings are slightly more likely than Pelican crossings to engender a sense of safety among pedestrians. While neither type of crossing could reasonably be described as presenting any fundamental difficulties of use, Puffin crossings might benefit from a general review of the visibility of pedestrian signals. At some sites, provision of additional signals would solve the problem of obstruction by other pedestrians. Where this is not possible, it will be important to make sure that all Puffin crossings have audible signals as well as visual ones.

The study was only looking at stand alone crossings; as Pelicans use flashing green men/ amber traffic signals, they are never used at junctions, but it is a useful piece of research in terms of user experience. For a while, TfL was quite interested in using near-side signals for new schemes and upgrades of existing kit and even back then, they were years behind other parts of the country which seemed to have embraced near-sided signals already. Of course, TfL are now more interested in "Countdown" which goes back to far-sided signals with an additional signal which counts down the time left to cross when the green man goes out and before the red man is displayed and they have produced a study showing people like that system too! (a whole other discussion)

The DfT published (now archived) guide to Puffin crossings (near-sided signals). Appendix D sets out some of the other research and the flavour of the document as a whole was in favour of Puffins. Interestingly, there is a section on PDU positioning (p22) and it discusses using "reduced angle of view" PDUs where see through could be an issue. The photo demonstrating the point is from Sheffield City Council! Reduced angle of view is all about the optics in the PDU which can only be see from a narrow angle. From what we understand, Sheffield is looking to rotate the pole of the offending PDU. I am not sure if there is a reduced angle PDU or not, but clearly something needs to be done. I don't know if this will work or not, we shall see.

So, what can we learn from this? For me, it is all about using the right tool for the job and not having a rigid policy one way or another because each site we look at will have its own issues to consider. It is also about checking signal installations at every stage and especially when they have been switched on to make absolutely sure that nobody gets confused. We all need to remember that if there is any confusion, then it is the people outside of the vehicles who will always come off worst.
Posted by The Ranty Highwayman at Friday, March 20, 2015