I had a week off work last week to recharge the batteries, but didn't switch off totally as I ended up in the middle of London. I actually made three visits, but one included the chance to take in yet more cycling infrastructure and revisit my current favourite little spot south of the river.

I had a family lunch appointment in Vauxhall and a personal appointment in the afternoon and so it gave me the excuse to squeeze in a bit of cycling safari time rather than bother with the Tube; if I am able, I use the bike in preference to the tube for onward travel from and to Liverpool Street. My Friday route took me through The City to London Bridge which I crossed and then ducked down to the South Bank via a pit stop at Borough Market. I then pootled along the river (in glorious sunshine) to Blackfriar's bridge where I jumped back up to street level to head south on Blackfriar's Road to see where the North-South Cycle Superhighway had got to.

Near the bridge, there were lots of roadworkers busily digging holes and laying kerbs'n'tarmac, but on the approach to Southwark Tube, the street magically changed before my eyes as shown in my wobbly little video;

It is actually rather wonderful as there have been roadworks here for ages and things seem to have come together rather quickly; I last visited in December where the whole area was a construction site. I regularly pass through Southwark Station on my way to meetings at Transport for London's HQ (Palestra) which is opposite and so I am familiar with the old road layout which was basically a socking wide carriageway with one lane in each direction.


There is plenty to see in the video such as low kerbs for the cycle track, the best bus stop bypasses we have seen in London (they are seamless), gently rising speed humps to give level crossing points for pedestrians and above all it feels really safe. I even tried a 2-stage left turn (being a directional track, getting on and off is more awkward) and because the junctions are compact and people on cycles get an early start green, they actually work far better than I have seen on CS2 at Whitechapel where the road is still huge (cautious thumbs up). One issue which I will have a look at in the future is some of the side roads were really busy and one mixes with traffic again - some serious filtering is needed.


After I marvelled at Blackfriar's Road, I headed south once more to have a look at St George's Road (still part of the North-South Route) where there was more of the same and now completely open. St George's Road connects to Blackfriar's Road via a short section of Lambeth Road which has been filtered (although is a bit of a bus waiting area). Even further to the south, St George's Road ends at the Elephant & Castle junction which is still being worked on (and I've not done any more research into the changes there). We also have an intersection with CS7 which bypasses Elephant & Castle; I'll return to all of this in the future when I understand it! St George's Road is one way and so the bidirectional track works well here.

I then left the comfort of the Superhighway to head west on Lambeth Road towards Vauxhall. My escape from the Superhighway was made easier by a dedicated green signal which gave me time to dart over to the left side of the road to turn left before the lanes of traffic behind me were released.


I am not aware of any plans for the main part of Lambeth Road, but it is mostly awful for cycling. There is a cheeky cycle bypass of traffic signals at Hercules Road which was OK, but that really was the highlight. I turned left into Sail Street where I followed London Cycle Network Route 3 which was heading in the direction I wanted. LCN3 cuts through some back streets and the roads seemed fairly quiet with many having modal filters and contraflow one-ways. They may be busier at rush hour, but I felt very comfortable at the time. With some thought and some improvements, LCN3 could be rather useful as a connection to CS5 to the west (which I did have a little go on).

Just off LCN3 was my destination and a hidden gem; the southern end of Vauxhall Walk. Just a few years ago, this gateway to the Vauxhall Pleasure Gardens seemed a little bit tired and unloved (at least looking at Google!). The street was a parking area and the space visually dominated by the orange paintwork of "The Queen Anne" pub which has had an interesting history, but closed when the landlady was shockingly murdered on holiday (thanks to Charlie Holland for the local knowledge).


The pub was taken over by the Tea House Theatre which opened in July 2011 and this little spot started to change. Again looking at Google, cycle hire had arrived by 2012 and towards the end of 2014 there was a consultation on removing some on-street parking and installing a large road hump near the Tea House Theatre. I think this was linked to a redevelopment of the street outside which blurs the edges of the Pleasure Gardens which seems to have been completed in early 2015 (correct me if I am wrong). So, what do we have now? Here are some photos;


The southern end of Vauxhall Walk taken from Glasshouse Walk and looking south. Note the very large speed table (road hump) taking the carriageway up to footway level (in fact, the speed table is the whole area beyond). The sign on the left is for a "Restricted Parking Zone". It is set up to ban parking in the area beyond and no loading is allowed during the day Monday to Friday. It means no yellow lines are required which would clutter the space beyond. 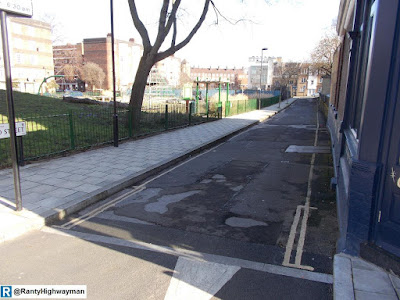 This is Laud Street (which needs resurfacing) and is just a little link road within the larger estate which has motor traffic filters and one-way streets (with 2-way cycling). The RPZ ends here and reverts to yellow lines for parking controls. 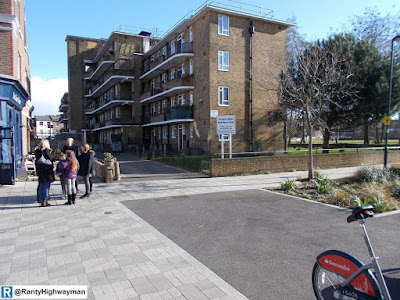 This is at the end of Vauxhall Walk where there is a vehicle access to the Vauxhall Gardens Estate (servicing and some private parking). 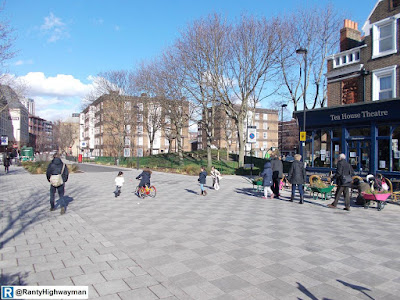 This is the view to the north back towards Glasshouse Walk, the access to the Vauxhall Gardens Estate is out of shot on the right. The Tea House Theatre provides a focus for the space. The tarmac of the start of the speed table has given way to a public square which some would refer to as a "shared space". Well it is a level surface with a "footway" area to the left and the main square simply paved with a muted checker board effect. I think that this paving could have extended over the footway area perhaps.

I have had a pop at so-called "shared space" recently, but Vauxhall Walk is a great example of how the concept can be successful as traffic flows are tiny (the street goes nowhere) and people walking and cycling dominate - even on a chilly (but sunny) weekday afternoon in February. 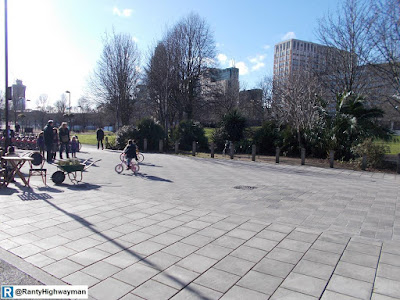 Another view across the new public square. People are hanging around chatting in what was the road and two little kids cycle round in circles in actual and experienced safety! 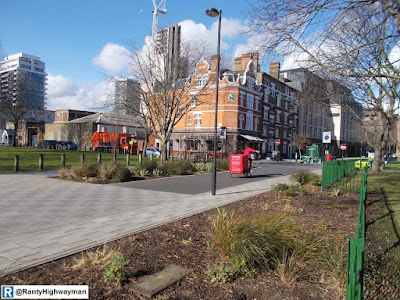 This photo is from Laud Walk looking north back towards Glasshouse Walk. From what I understand, the two planted areas are designed to take some of water from the paved surface as a kind of "rain garden". The chap in the distance was on a bike, towing a sandwich trailer! 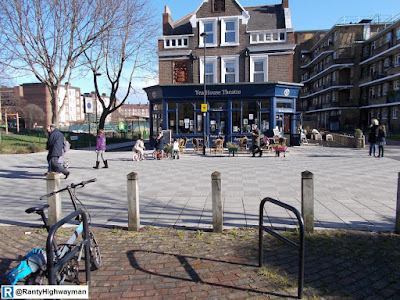 This view takes in the street activity and the Tea House Theatre which is painted far more elegantly than the old Queen Anne pub. I have to give a shout out to the excellent cakes and lunches sold in the Tea House Theatre and the staff who allow you to relax and take all the time in the world - thanks guys!

Vauxhall Walk is a perfect example of how we can change a place from somewhere cars are stored, or where people hurry through, to something where people choose to linger and where they want to be. The Tea House Theatre also creates both a visual anchor to the site and somewhere people want to visit. The almost total lack of motor traffic is very important - had cars been driving through, even a few a minute, the effect and feeling of safety would disappear. There is no one thing at work here, it is everything working together to return a neglected pocket of London back to locals and visitors alike.
Posted by The Ranty Highwayman at Wednesday, February 24, 2016