I've been boring everyone with the proud father routine recently because my eldest daughter (nearly 8) has just learnt to ride her bike.

She was really disappointed last last summer, because try as she might, she just couldn't get the knack. This year, she wanted to try again and after a few days of thinking it might be the same struggle as before, the light bulb pinged and she was off! 5 days after learning, she rode 4 miles in a sponsored cycle for her Beaver Scout Colony and 2 days after that, I took her to Central London to ride along the newly opened CS3 cycle route between Tower Gateway and St James's Park.

It was a first for me as although I had ridden lots of parts the new new route, it was the first time I'd seen it since it was fully opened through the Blackfriar's Underpass and the Castle Baynard Street tunnel.

We arrived with our bikes at Liverpool Street and I attempted to get us to Royal Mint Street using back streets as there was no way we were going to ride on the main roads in the City which are bad enough for someone like me who puts up with the conditions. This is a major flaw for cycling around some of London's main stations because now we are starting to get some useful infrastructure, the lack of safe links is all the more stark. I could have taken us to Shadwell, but it would have been more of a faff. I eventually un-lost us and we started our ride.

Within a couple of minutes of explaining where she should position herself, we had our first set of traffic signals to deal with. Being 7 (and possibly her father's daughter), she quickly understood the big signals are for when one is far away and the little ones are when one is at the stop line. She already understands the signal colours and she understood the stop line plus (importantly) not to trust drivers to stop.

And that was it, we were off! My daughter wanted to go to Borough Market for a snack (because that's what I do with her older brother when we ride CS3 in from Barking). Previously, we would have used Tower Bridge and then Tooley Street (which is OKish on a Saturday morning), but I remembered there was roadworks on it. Fortunately, the new section of CS3 runs to Fish Street Hill which gives access to London Bridge which crosses the Thames right to Borough Market. We had to ride on the footway here as London Bridge is awful to cycle on, even at weekends. Still it is better than Tower Bridge! 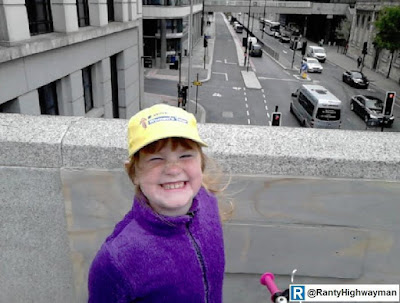 Achievement unlocked. The view down to CS3 at the Fish Street Hill junction from London Bridge. After our stop at Borough Market, we retraced our tyres back down Fish Street Hill and carried on towards Westminster. First, it was through the Blackfriar's Underpass, somewhere only the battle-hardened would have ventured previously. The one issue I need to mention is that the kerbed island is of course very welcome (and enables the scheme), but it is a little narrow and one needs to keep away from it so it doesn't catch a wheel (because you really don't want to fall over the island on the wrong side).

I'm not saying its a *nice* place to be, but it is functional (if a little unfinished). At the end of the run, we had to turn left across various traffic lanes to get to the track on the Victoria Embankment. It was a little confusing for my daughter and I think it needs "elephant's footprints" to make the route clearer (I found this in a number of places). 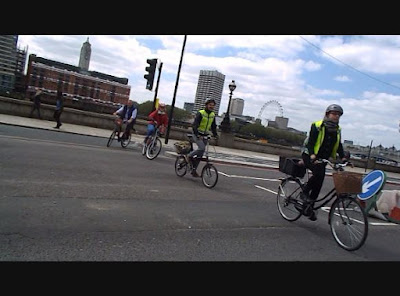 As you can see from the image above, we were turning left at the end of the Blackfriar's Underpass and then we would be turning right onto the Victoria Embankment. Turning left again would take us up a ramp to Blackfriar's Bridge which connects to the North-South Cycle Superhighway, now part of CS6. We continued all the way to Westminster Bridge and it was bliss. 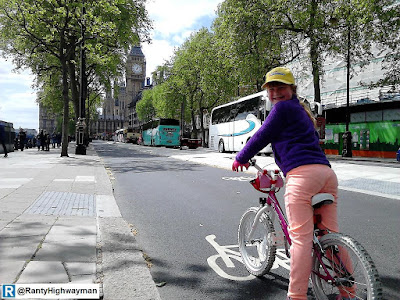 Come on, how good is this! Cycling with my son has always been single file, planning each section and having to worry about both of us. This is such a contrast, often side by side, chatting away. It's comfortable and safe.

The pedestrian crossing from Westminster Bridge over the Victoria Embankment has also been hugely improved in terms of width, space and green time, although it's still two-stage. Parliament Square is still being worked on and again, I think elephant's feet markings are needed to really show the routes through the junction as despite getting a green cycle stage, it doesn't quite feel your own space. Our ride ended (fittingly) outside One Great George Street, the HQ of the Institution of Civil Engineers.

We walked our bikes to St James's Park for a rest and an ice-cream before heading back through Parliament Square and we weren't the only ones taking advantage of the protection; 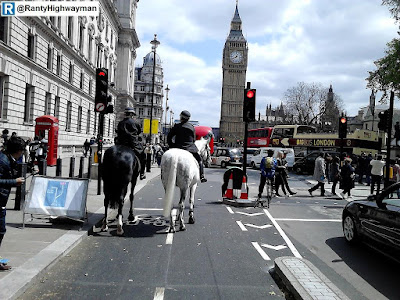 The route bends from the left side of the street (as in the photo) over to the right (by the central part of the Square) and again, I would prefer to see elephant's feet to help guide people cycling. We carried on back towards Blackfriar's with the odd rest and of course a couple more photos. 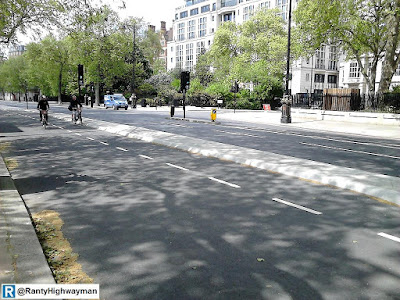 There were quite a few people cycling in the area, not as many as we have seen in the weekday photos of course. We did see the fast people on racers (fast but not dangerous), but we saw lots of people on hire bikes and people dressed normally (lots with kids), just pootling along; it's going to be packed in the summer!

As we headed back east, I gave the option of going onto CS6 to head south to find lunch or to get lunch near Liverpool Street. We headed south via the ramp up to Blackfriar's Bridge which, until a few weeks ago, was essentially a mini-urban motorway ramp. 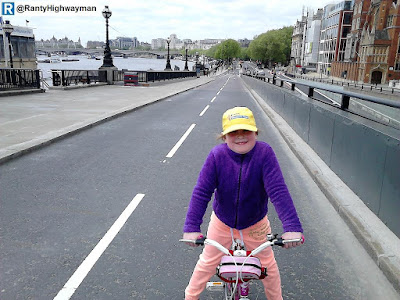 As much as CS3 winds through iconic London, I still think CS6 along Blackfriar's Road has the edge for me (for some reason). We ended up at the Elephant & Castle for lunch, before we headed north again to jump on the Tube at Southwark (and the tube was nowhere near as pleasant as cycling).

In all, we covered 8 miles and this was astonishing because my daughter had been riding for just a week. What was even more astonishing was that we were able to have this ride at all. For comparable places back home, there is no way we would have been on the road and it would have been back to the stressful watching out for both of us, no side by side chatting and no real comfort. We do have a shared-use track along the trunk road near where we live and it isn't terrible to use (and it usefully serves a cluster of big box stores), but it belongs in a different era. I asked her what her favourite part of the ride was, it was the little traffic signals!

If there are any politicians reading, please take notice of this because it is a shining UK example of how we need to enable people to cycle on big UK roads. This as nothing to do with forcing people out of their cars because it is such a great alternative and although our trip was for the ride itself, cycling was a much better way to get around than the Tube.

Don't take our word for it. A Kidical Mass ride (the "June Jaunt") has been set for Sunday 26th June. It will be starting at the Cable Street Trees near Shadwell Station at 11am and will end at St James's Park. Bring your children and see for yourself!
Posted by The Ranty Highwayman at Friday, May 20, 2016