Out Of Space: The Cycling Embassy Of Great Britain's 2016 AGM (Part 2)

Last week was the first part of my review of some of the cycling infrastructure we saw during the Cycling Embassy of Great Britain's 2016 AGM in Cambridge.

This week, is the second and final part of my review and will cover cycle parking, how even a new-build scheme with all the space in the world can be done badly and will conclude with some smaller interventions which are simple to replicate anywhere.

Parking
We know that Cambridge has a lot of cycles and finding space to park them is a constant headache. Of course, the beauty of cycling is that one can essentially park right by where one wants to stop; where the attractor is popular, we need lots of space! Cambridge Station is extremely popular and the solution for cycle parking here is on a grand scale. Cambridge Cyclepoint opened earlier this year and has space for nearly 3,000 cycles over three floors.

The ground floor is smaller than the first and second and will eventually be for cargobikes, other non-standard machines and for people requiring step-free access. The upper floors are accessed by shallow steps with ramps - it would have been nicer for shallower ramps one could cycle on, but this would have taken space. There is also a cycle shop on the ground floor. For someone used to leaving his cycle outside on a Sheffield stand this parking facility was rather stunning. Yes, I did cycle down the ramp! 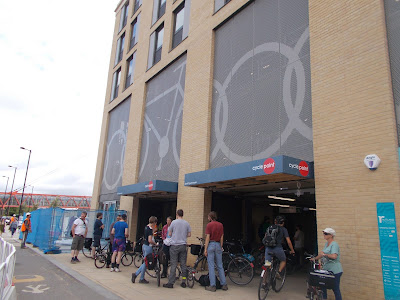 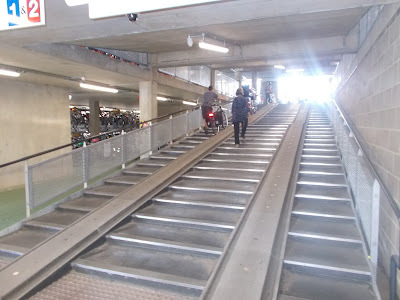 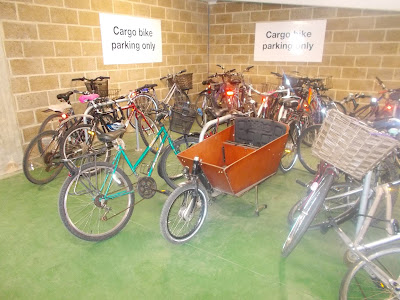 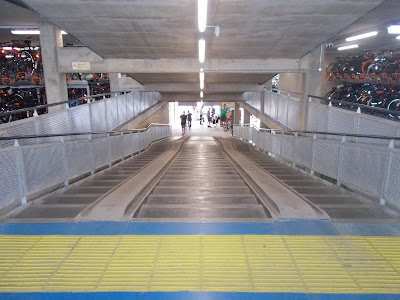 In the city centre, there is a couple of other cycle parks. We had a look at the 200 space Grand Arcade Cyclepark which is in the basement of a multi-storey car park. Elsewhere, opportunities have been taken to provide cycle parking. We had our Saturday night dinner at the wonderful Haymaker's Pub in north-east Cambridge (and some of us had a few beers too!) and cycle parking for a large group was no problem at all as the pub had plenty. 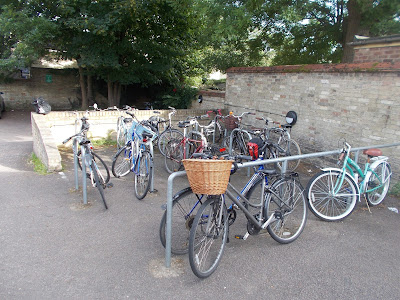 As you can see above, plenty of space at the pub with more parking behind the wall. The railing that the cycles at the front are locked too continues out of shot along a wall and is perfect to lock cargobikes to. Cambridge is a university city and cycle parking has been taken care of, at least in the campuses on the edge of the city. 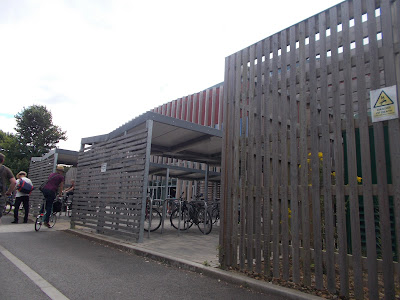 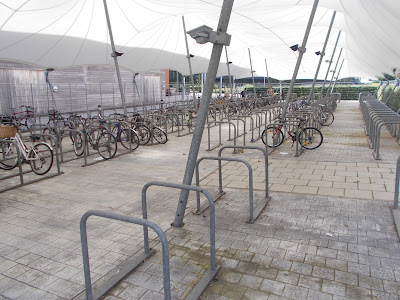 On a much smaller scale, there are places where on-street residential and business parking has been provided such as outside this pub; 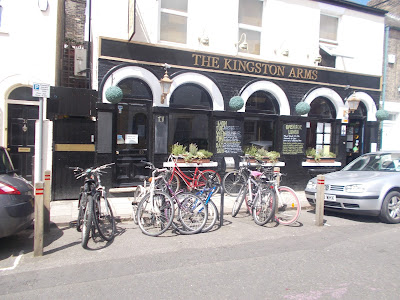 and this car parking bay which has been repurposed. 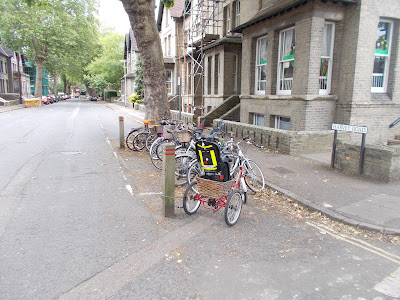 Of course, people want to park near to where they are going and so bikes are just left lying about as we saw in one of the parks where cycling to a football match (to play!) is the simple option. 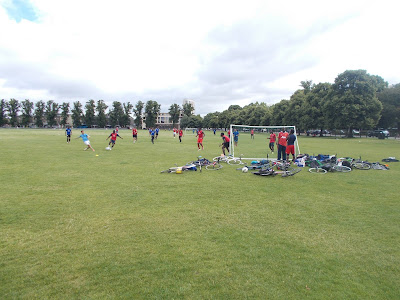 In the city centre
The centre of Cambridge is a curious mix of streets which still contain heavy traffic and streets which are dominated by people walking (although cycling is allowed). In fact, some places really did remind me of Deventer in the Netherlands which I visited last year (no, seriously - look at the last photograph of the next four!) 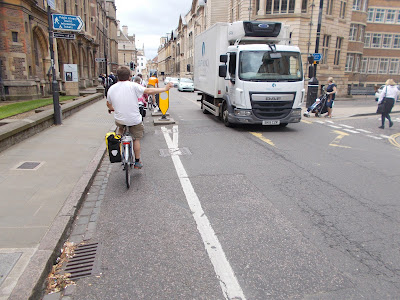 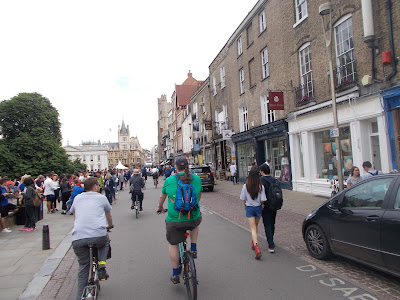 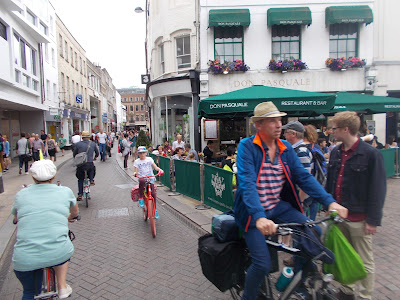 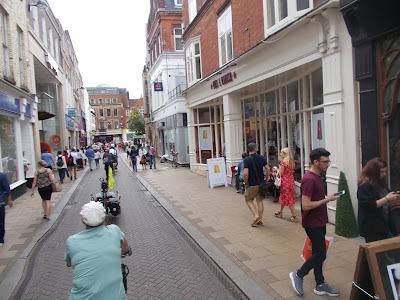 The city centre was packed as you'd expect on a summer weekend and some of the tourists were curious about our little convoy! But people just got on with it as they do in other places which welcome cycling. There was no blasting through, we couldn't; it was just nice. The traffic is the issue as aside from servicing, we have city centre car parks which hgenerate revenue and this will be a hard golden goose to kill off.

Out on the edges
On the Sunday, we got out of the city centre for a longer ride out to West Cambridge and one of the highlights was the Coton Path. Apart from a slightly rubbish zig-zag to get onto it, the path has a 3m (ish - it does vary a bit) cycle track with a stepped (up) footway of about 1.8m in width. The track is smooth, surfaced in red asphalt and has good drainage. 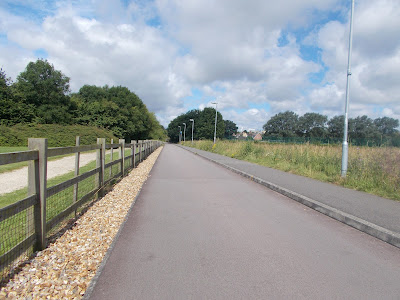 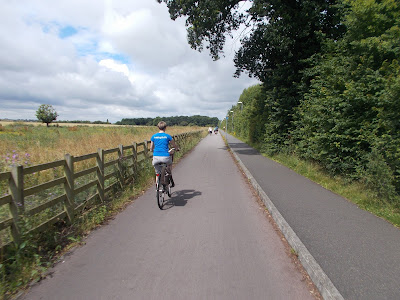 In fact, it's a cycle road and very good too. I suppose today, we'd use lower kerbs with a gentle profile. But, it is really good and one can easily eat the miles on a infrastructure like this! We turned off the Coton Path into a growing complex of buildings which are part of the University of Cambridge's development in the west of the city (because the centre is full up!)

Sadly, the infrastructure became progressively worse and this is a massive shame because it is all new build and as you will see, space wasn't an issue. First is a section of path after turning off the Coton Path. It's a shared-use segregated affair, but the paving is all the same with a contrasting centre line. You are cycling on block paving (left side I think) which is fine, but nowhere as good as machine-laid asphalt (photo below). They could have taken a cue from the Coton Path and built this with light block paving on the footway, a forgiving kerb and red asphalt for the track. 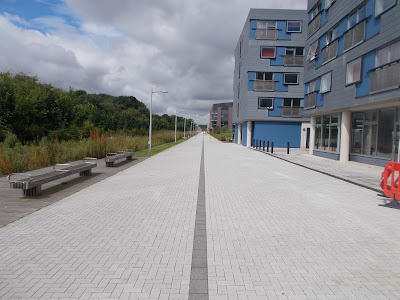 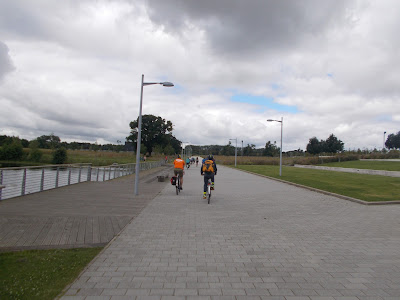 Futher west, it becomes completely shared (above). Then there are a series of estate roads and there is a shared path, segregated with a tree line. Again it's all block paved and people cycling essentially give way at each side road. It's a pretty version of what we can see all over the UK and it doesn't even have tactile paving to help visually-impaired people. 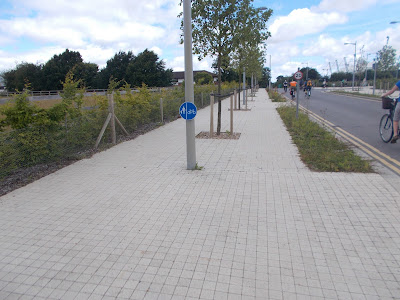 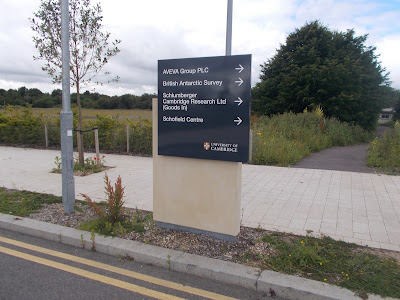 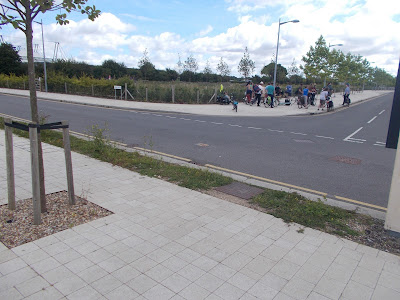 The two photos above show that one cannot cycle between the tracks at junctions (at least without a detour). This is new build and should have been a world class demonstration of how to lay out streets for all. A huge shame indeed.

The little stuff
I want to round up this post with some positives. Regular readers will know that I am a fan of the little things which can have a big impact and in Cambridge, there is some excellent and pragmatic modal filtering to be seen. The photo below is the north end of Gresham Road which narrows down from a road to a cycle track using a simple row of bollards. The street ends in a parallel crossing of the A603. 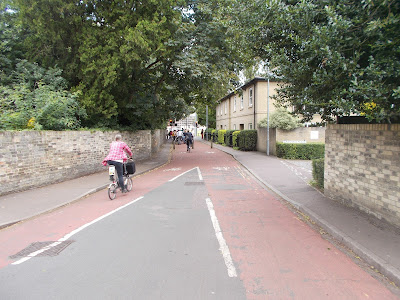 The crossing connects to the separate path and track shown below. 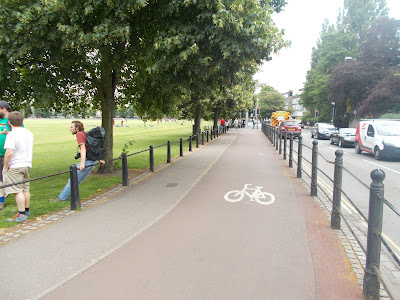 The photo below is of a filter at Gwydir Street. It needs to be modernised as although the slalom gates are OK to ride through, it's tight. We heard that the gates (for fire access) are rarely locked, but cheating by drivers is rare and it's locally policed by the residents! 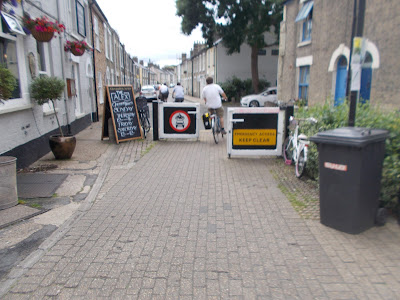 This next photo is in one of the filtered areas either side of the Station and it not only shows contraflow one-ways for cycling (motors get access, cycles get through in all directions), but opportunities have been taken for greenery. 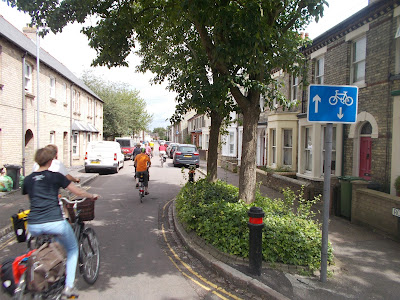 The photo below is (I think) St Philip's Road which is one way for motors and 2-way for cycles. It was built before we were able to have "no entry except cycles" signs and so there are narrow cycle bypasses which are too narrow for non-standard and adapted cycles; again, good principles which need updating to be accessible to all. 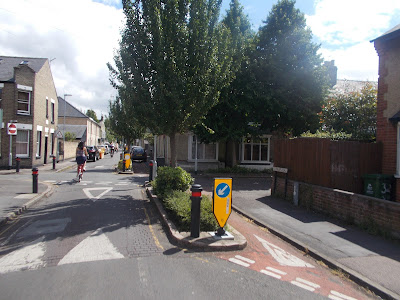 Conclusion
Cambridge is a nice city to stay in and a nice cycle to cycle around and I'd definitely recommend it if this was a travel blog! As an engineering blogger, I'd recommend it too as there is some really interesting stuff going on and certainly, there is some realisation that the private car simply doesn't fit in the city centre. This is not an ideological position, it's a space position. I hope that the practicality argument wins as this is a place where one should be able to get on with cycling for transport! 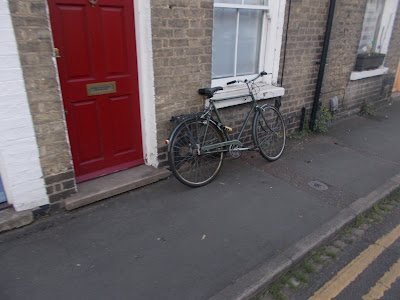 Posted by The Ranty Highwayman at Wednesday, July 27, 2016