Every Day Is Cycle To Work Day

Today was the annual cycle to work day which celebrates getting to work by pedal-power (no surprise there!)

I posted a little set of photos from cycle to work in 2014 and this year I thought I'd do it again. Not that much has changed sadly, but it's a snapshot of the hotch potch of provision in Outer London (pretty typical I'd imagine). At least this year, there was some nice new stuff to use. 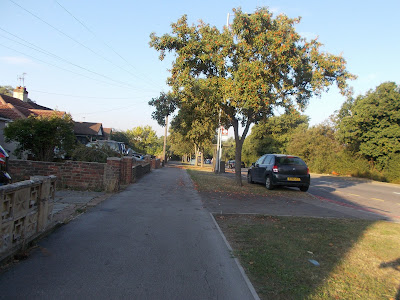 So, I'm onto the shared path next to the trunk road which is
better than mixing with high speed lorries! 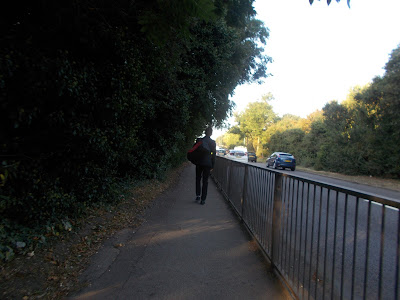 There's a pinch point between a line of trees in the park
and some guardrail where there is always people walking. 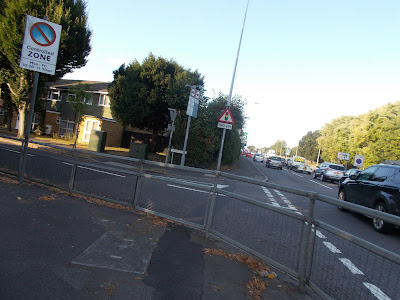 One of several side roads where you have to slow down
look behind you and cross away from the desire line. 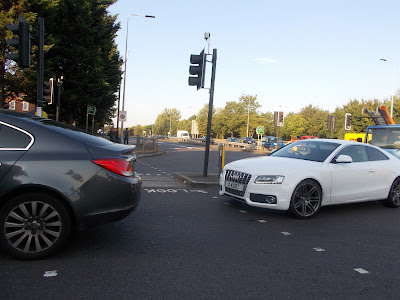 As usual, drivers pile off the main road without checking
their exit is clear and with no green man (or bike!) it's hard to cross. 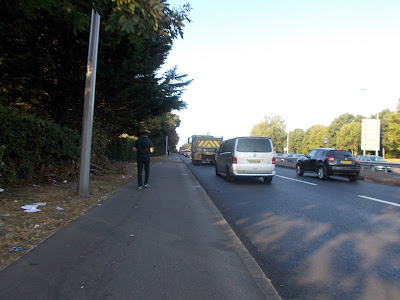 The usual two lanes of slow moving traffic. The shared track
is not bad and this section doesn't have many people
walking. The surface is far from smooth though. 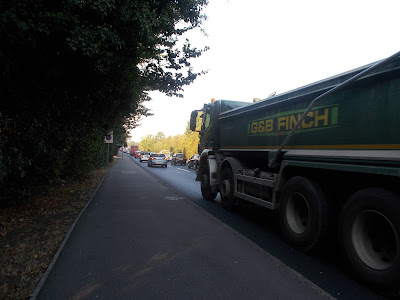 I think you'd be mad to be on the road here, but depending
on the time I travel, I normally see one chap sticking to the road. 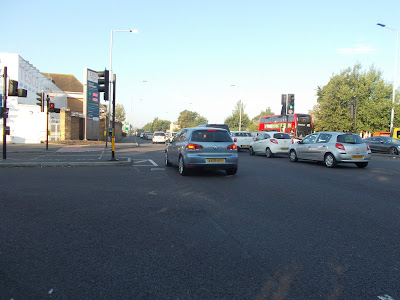 This side road has a two-stage staggered toucan crossing,
but going to work, I rarely use the inset crossing as it's tight
on the bike. I cross on the road in two halves. 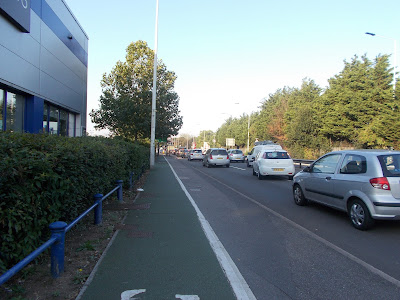 An old attempt to provide separation, but people walking and
cycling prefer to be away from traffic, so we have conflict. 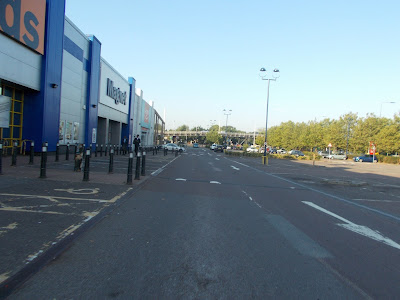 A quick short cut through the retail park because it is better
than the shared use track which is cluttered with massive signs
an assortment of posts. 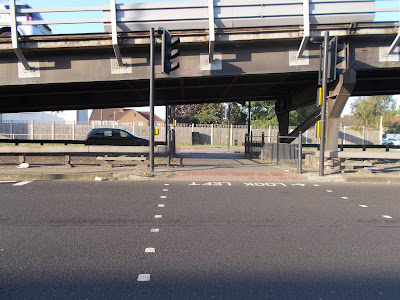 Here is a two stage non-staggered toucan with nearside
(puffin style) signals. I generally take a gap in traffic because
it normally takes a minute or more to get a green man on each
half. It's terrible and needs to be changed. 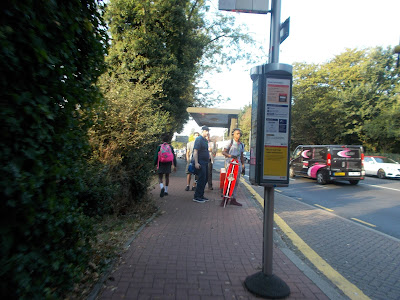 Off the big road onto a local, but still main road. There's
not enough space for all here, but normally we all cope and
it's still better than the road which I used to use until recently. 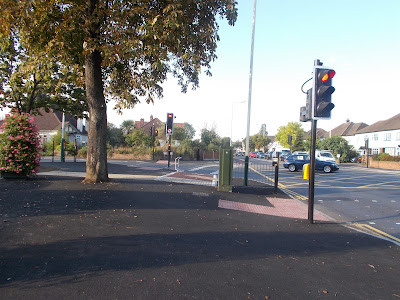 I don't use the road anymore as after the bus stop, this
new layout has recently been constructed. 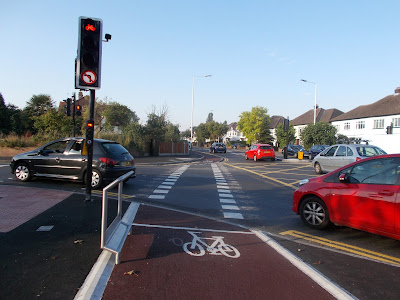 The shared use track gives way to separate walking and
cycling space in the form of a parallel crossing. There is
even an idea imported from across the North Sea to avoid
having to step onto the ground at the stop line. 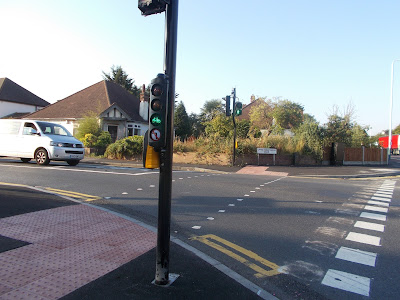 An "all green" comes in for people crossing the side road and
the main road via the toucan crossing to photos up (running
off to the right, and connecting a cycle track on the other side
of the road). 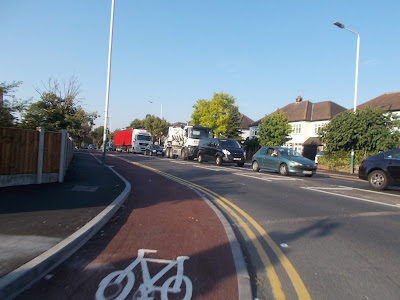 On the far side of the junction, a separate cycle track rises
from carriageway level and directs people cycling towards town. 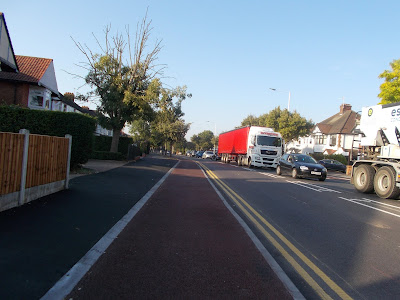 Space is tight to start with and so the track runs next to the
footway, but with a 35mm step up provided by a forgiving kerb.
On the carriageway side, we have a general 60mm high kerb
which gently rises and falls to 25mm at vehicle crossings. Some
additional visual priority is provided by the double yellow lines. 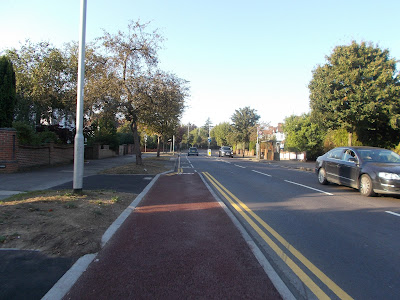 There is a compromise in that the track and verge would
have been better swapped here, but many trees and utilities
made this cost prohibitive. In any case, the money ran out here
and the track slopes down into an advisory cycle lane. The
double yellow lines help show people cycling that there is
a bit of a squeeze ahead. 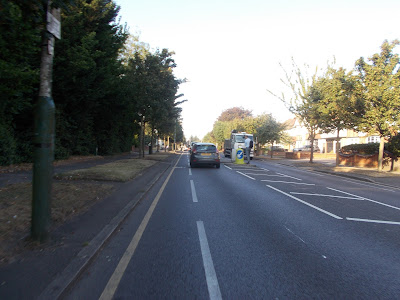 Then it's back to business as usual, but there is a tantalising
view of the space from which the cycle track was won. 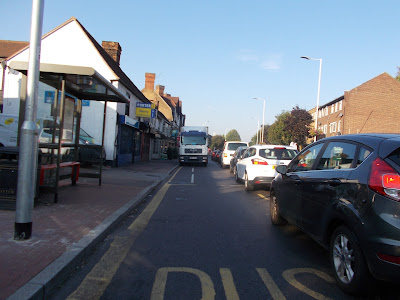 Picking up traffic, not helped by a delivery to a pub. 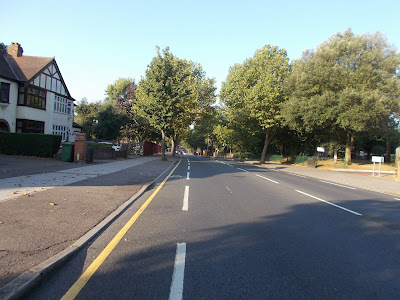 A perfect morning for cycling and I'm left wondering where
all the cars have gone as it's not usual so quiet. 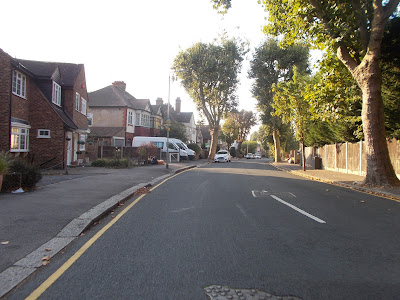 Off the main road into a side street which is largely quiet,
but would be an ideal place for a bit of filtering as local
drivers use it as a cut through to avoid the main road
(as I am doing!) 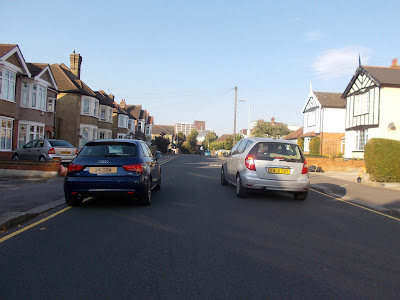 There must be something in the air as this person gave
me loads of space. 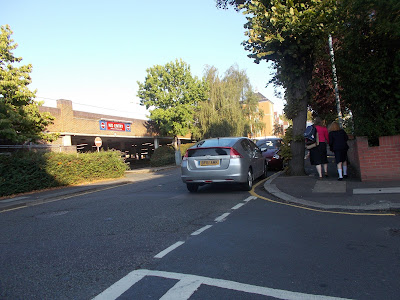 Wonderful - I'm turning right and this PLAC has blocked
the view. 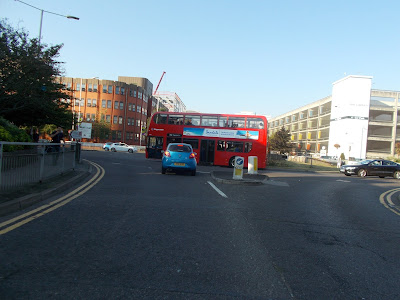 I'm nearly at the office, just this roundabout to turn right at. 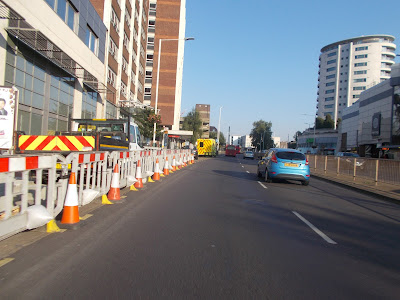 Onto a narrow Medieval street. 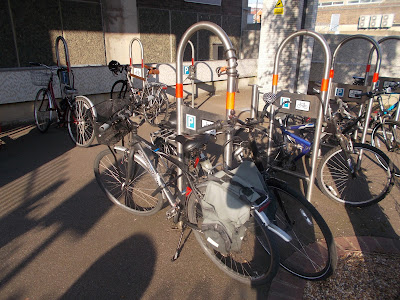 And finally, the cycle parking compound which is pretty busy
today. With all of the fuss in Central London, people forget that
the Capital is far bigger and far worse. Perhaps with little oases of
infrastructure here and there!

Posted by The Ranty Highwayman at Wednesday, September 14, 2016