On The Right Track

The term "cycle track", has as many permutations as you could think of, but this week, I'll try and make a little sense of it and boil them down to what I think the different types are.

The UK legal definition of a cycle track is set out in S329 of the Highways Act 1980 which states;

"cycle track” means a way constituting or comprised in a highway, being a way over which the public have the following, but no other, rights of way, that is to say, a right of way on pedal cycles (other than pedal cycles which are motor vehicles within the meaning of the Road Traffic Act 1988) with or without a right of way on foot.

Don't worry about the RTA1988 reference, this relates to e-bikes which have motors more powerful than is permitted. The Highways Act definition comes from an amendment provided by S1 of the Cycle Tracks Act 1984 which is a little confusing at the CTA84 is actually concerned with the conversion of public footpaths into cycle tracks. Forget that, I'm dealing with normal highways here.

S65(1) of the HA1980 gives highway authorities the powers to build cycle tracks as follows;

Without prejudice to section 24 above, a highway authority may, in or by the side of a highway maintainable at the public expense by them which consists of or comprises a made-up carriageway, construct a cycle track as part of the highway; and they may light any cycle track constructed by them under this section.

Section 24 relates to the same powers the Secretary of State (and indeed Highways England) has to build cycle tracks. Anyway, I write all of this just to reinforce the point that we are allowed to build cycle tracks within our highways, they are for cycles, they can be for people walking and the definition of one is gloriously vague (bear with me).

On the point about people on foot brings me to the first type of cycle track; the shared, unsegregated cycle track; 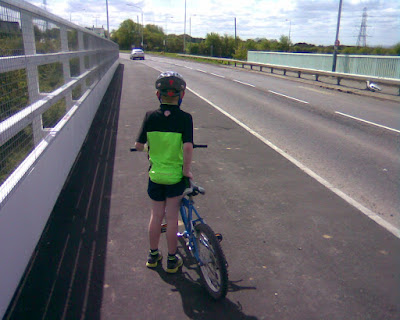 Essentially (as the photo above shows) we are talking about a path which can be used by people walking and cycling, there is no demarcation and very clearly, width is going to be an issue. If too narrow, we have lots of inbuilt conflict and even if wide, people walking and cycling are not regimented in terms of position so conflict is possible. They work best where there is little pedestrian traffic and so with the example above, we are talking about inter-urban locations.

The next type of provision is the shared, segregated cycled track; 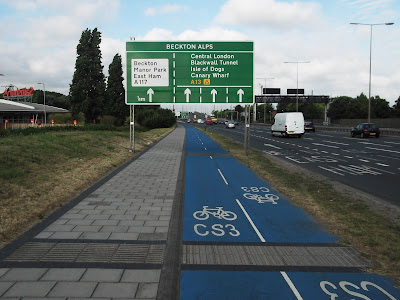 As can be seen above, there are distinct walking and cycling areas. The layout above isn't bad (well, at least this section) as it provides plenty of space for people walking and as cycle traffic flows are relatively light, it is wide enough for two-way (bi-directional) use. The separation is provided by a demarcation kerb in the middle; 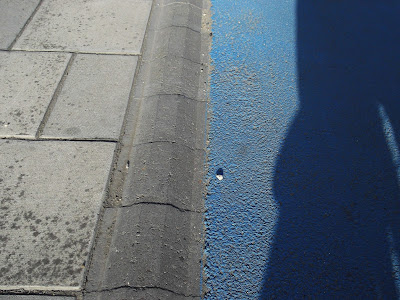 The demarcation kerb is forgiving to ride over and provides something along which visually-impaired long cane users can detect. The tactile paving in the previous photo further assists visually impaired people to detect which side of the demarcation kerb to walk.

Unfortunately, much of what we see for shared, segregated tracks, is a painted line down the middle of a footway which may not have been a decent width for pedestrians in the first place! (see below). 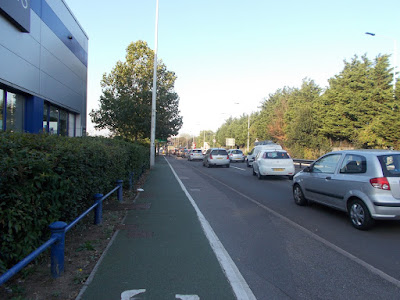 Next is the stepped or hybrid cycle track - I prefer stepped as it describes it better, such as the example below. 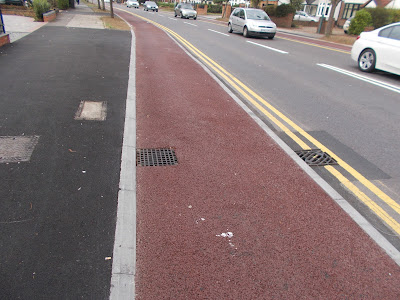 The stepped track is so called because it is "stepped up" relative to the carriageway level and in turn, the footway is stepped up relative to the cycle track. From what I have used and been involved with from a design point of view, it is preferable (vital some might say) that the kerb between the footway and the track is forgiving.

By forgiving, I mean the kerb is gently sloped. This allows cyclists to go very close to the kerb (to maximise usable width) and if they catch it, they won't be thrown off. It also allows one to leave the track which is handy if one wants to stop to park up to go into a shop and it's very useful for users of adapted and non-standard cycles who may use their machines for mobility.

From the point of view of visually impaired people, the kerb can also help demarcate the footway and cycle track, but if they are walking perpendicular to the track (at a junction perhaps), it is possible that the kerb will be missed and so care with the design is needed.

With the examples of the shared-use and stepped tracks, they can come with a buffer between them and the carriageway (which increases the protection of a user should they fall off towards the carriageway side) as shown on the photo below; 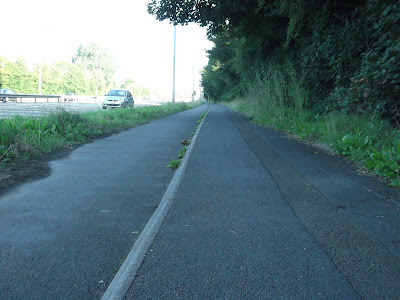 The next permutation is the kerb-protected cycle track. this arrangement uses kerb units between the carriageway and track which are both at similar levels; 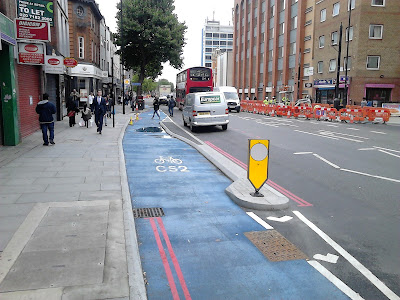 A disadvantage with stepped tracks where the track abuts the carriageway is that it is very tempting for drivers to bounce up the kerb to park on the track. Kerb protected tracks can reduce the risk of encroachment by drivers because the kerbs look less attractive to drive over. From a user point of view, a kerb helps increase the "feeling" of safety as it also provides buffered space from traffic.

There is a risk of cyclists clipping the kerb and falling into live traffic. This can be mitigated by adopting uni-directional use, although people overtaking are exposed to the risk in any case.

Finally, we have median-protected cycle tracks. The provide the highest level of protection to people cycling as in the event they fall off, it might not be pleasant, but it's not into live traffic; 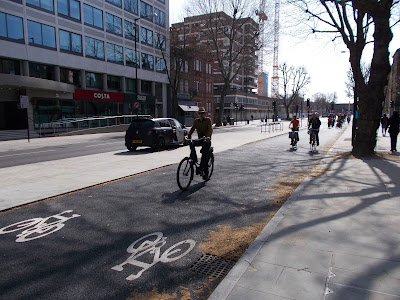 As you can see above, there is a wide median area between the cycle track and carriageway. There is an element of parking and loading provided here and even with the car door being opened, these people cycling are doing so in great safety. A median can also provide passenger waiting space at a bus stop. 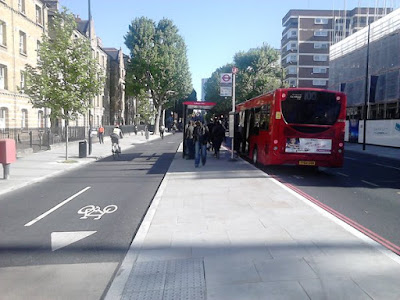 There are some variations on the theme such as "parking protected" cycle tracks, although the parking essentially forms a median anyway as can be seen below (and rely on cars being in the spaces to provide protection). 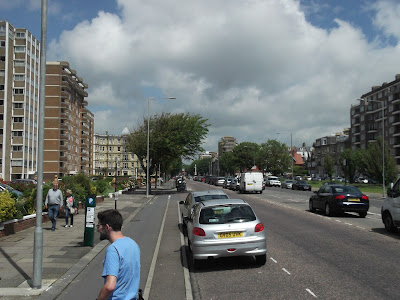 As you can see with the photos, there are many ways we can provide cycle tracks. The good news is that all of these examples are from the UK (some layouts older than others), so the engineering isn't really that tricky.
Posted by The Ranty Highwayman at Sunday, January 08, 2017