I almost hesitate about writing this post because the headlines have splashed, people have muttered the usual "bloody councils using hard-pressed motorists as cash cows" and the RAC chimed in with;

"Bus lane cameras are fast becoming a new 'cash bonanza' for councils. The amount of money being raised by them in fines is frightening.

Rather than just rubbing their hands together and taking the money councils should be asking questions as to why so many motorists are being caught driving in bus lanes."

The story has of course been picked up by the usual suspects such as the London Evening Standard, Metro, and Daily Mail (who I won't link to). I don't know whether the news release was pre-cascaded to other outlets and no doubt local takes on the "news" will be doing the rounds such as the Chronicle in Newcastle. That sort of debate is for others to take forward. The data relates to the 2015/16 financial year where £31m was taken in bus lane fines. To put that into context, the revenue budget for English local authorities for the same year was estimated at £4,922m (£4.9bn) for highways and transport. So, the bus lane fines contributed 0.6% - I state contributed as fines can only be used for highways and transport matters by the issuing authority.

You'll probably be familiar with the saying about a lie being half-way around the world before the truth gets its shoes on and this type of reporting is the same. The story is out with another little chip added to the shoulder of the beleaguered collective of otherwise-law-abiding-motorists. Looking at the data is a waste of time.

But, I am interested in the numbers and the BBC has helpfully provided a link to the results of its 160 Freedom of Information requests made by BBC England and with Department for Transport traffic data, we can pick out a few examples to discuss. The BBC also has produced a chart of "England's most lucrative bus lane cameras" and it's those I'm going to try and delve into; 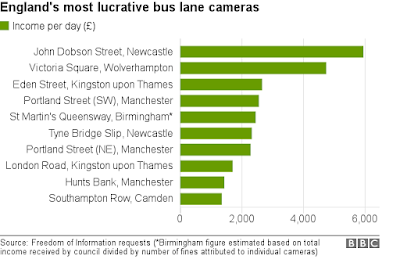 The table has been framed in terms of income per day with John Dobson Street in Newcastle being the one where fines of about £6,000 per day are being issued. Of course, that's a snapshot and as reported in the Chronicle, the City Council said;

“Since bus lanes were introduced on John Dobson Street we have seen a dramatic decrease in Penalty Charge Notices issued from 13,500 in March 2016 to around 4,000 in February 2017 and we are confident this downward trend will continue."

The point about John Dobson Street is it is a relatively new scheme from what I have read and so I'm afraid that for some drivers, it has taken time to bed in and it's not really a bus lane in the sense that it is a lane next to general traffic lane, it is a section of street reserved for buses (and other users) with a rather nice cycle track as well! By February this year, there were still 143 fines a day issued which is still high, but you can see what each end of the restricted section of road looks like and so people are fairly warned (here and here).

OK, lets look at a "traditional" bus lane because we can look at the number of fines issued per day versus the general traffic flow. London Road in Kingston-upon-Thames in London just happens to have a DfT count point. It is No.8 on the BBC's list at about £1,700 in fines a day or on average just 26 fines. The average daily traffic flow here was 16,736 vehicles per day in 2015. This means that just 0.16% of drivers couldn't manage to obey the rules and 99.84% of drivers complied.

It's pretty pointless to go through them all, but my general observation is that city centre schemes such as John Dobson Street seem to drum up a bit of cash to be reinvested into local transport schemes, but they are arranged to give the bus an advantage over private transport. This is deliberate and is designed to make bus travel more attractive. With the bus lane next to general lanes example of London Road, we actually get a tiny amount of bus lane abuse compared to overall traffic flow. Looking at the amount in fines "raised" compared to English revenue budgets for highways and transport, the 0.6% is equally unimpressive and not in any way newsworthy.

So, the real headline here is that in general, driver compliance with bus lanes and bus "streets" is excellent, and this allows space to be reserved within which we can prioritise a more efficient transport mode. Early compliance is perhaps worse on a newly opened scheme, but people are not really being caught out, they are failing to pay attention. The trouble is, this type of headline is not "news" and doesn't generate interest. It certainly doesn't support the organised motoring lobby's myth that it's law abiding drivers being targeted. That's an hour I'm not going to get back, but it's off my chest!
Posted by The Ranty Highwayman at Thursday, March 02, 2017