I finally got my street works "ticket" through the post after resitting the qualifications to supervise road works which has to be renewed every 5 years.

I thought it might be useful to share a document with you which most people won't have come across (why would they) which is the main reference for people undertaking road works in terms of how traffic (in the widest sense) is managed on a temporary basis. 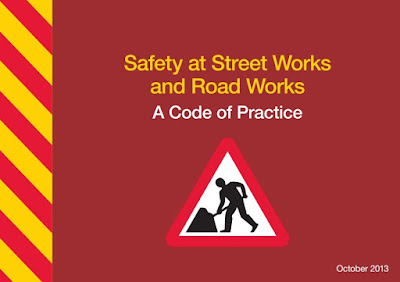 Safety at Street and Road Works (SSRW) has been around for many years, but the current October 2013 is now a code of practice which is very important as in general, following a code of practice will be a way of demonstrating that one has complied with the law. SSRW is no different; 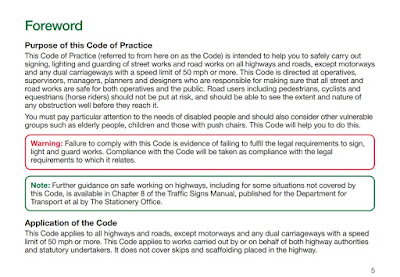 The part highlighted in red states;

In other words, if you follow the guidance, you've complied with the law. This is not to say you can do things differently, but you would need to be doing better in my view. This document could perhaps be seen as a legal minimum. The part in green says that situations on motorways and 50mph + dual carriageways is dealt with differently. So, the document deals with most UK streets and roads, although in Scotland it is recommended rather than mandatory. Where a situation isn't covered, then people are directed to seek advice from their supervisor, manager or other competent person and so SSRW is aimed at road workers as well as those supervising works.

SSRW is broken into sections;

Part 1 deals with the backgrounds issues (such as the status of the document mentioned above) and also the things to consider before anyone goes near a shovel.

Part 2 is the meat of the document. It starts with a reminder that there is a fair bit of planning to do before anyone gets to site and for planned works, someone with competence should have visited the site to plan the works and to undertake risk assessments where appropriate. For unplanned works (i.e. emergencies), there is still a need to plan, but the works may need to change as they progress.

Part 2 also talks about risk assessment and analysing traffic flow and composition (in the widest sense), the layout of road and streets, with commentary on how things might change as the work progresses. We than have advice on how works should start in terms of setting out the most basic signage which is then built on and can lead to really complex layouts. The principle here has certain signs and management tools (such as the humble cone) being set out in a certain way and certain order. When the works are complete, this "stuff" is usually removed methodically and in reverse order. 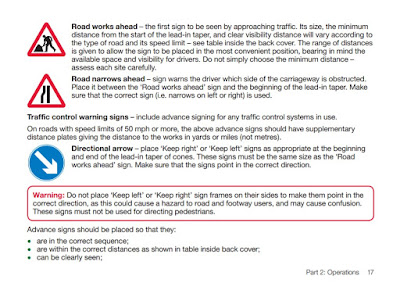 Above - your basic road works signs which should always be used. As the section continues, the layouts get more complicated and anything in a red box should be paid close attention. 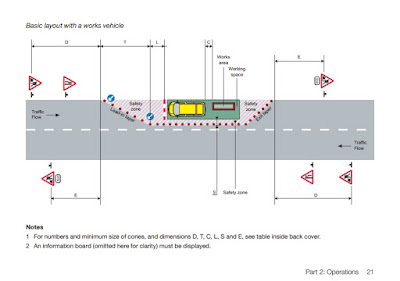 The image above shows a basic layout where an excavation is taking place in the carriageway. For those who can't see, the various dimensions relate to distances signs should be before the works, the length of coned-off areas and other space requirements; all linked to a table at the end of the document which relates to speed limits. There are lots of situations described and there is commentary on how to deal with pedestrians, cyclists, equestrians, trams and railways.

The matters dealing with people on foot is well established and there are clear requirements such as;

You must take into account the needs of children, older people and disabled people, having particular regard for visually impaired people.

If your work is going to obstruct a footway or part of a footway, you must provide a safe route for pedestrians that should include access to adjacent buildings, properties and public areas where necessary. This route must consider the needs of those with small children, pushchairs and those with reduced mobility, including visually impaired people and people using wheelchairs or mobility scooters.

The requirements for people cycling is less established. SSRW will be 4 years old this year and even in that short time, there has been a real change on how we provide for cycling in some parts of the country. The sign shown on the first page for this is not particularly helpful;

This is at odds with the earlier statement about taking into account the needs of children, older people and disabled people. As we know, cycles are often used as mobility aids and so our game must be upped. Mind you, next to the sign it says;

Cyclists might have to use other parts of the carriageway, a temporary cycle track, or an alternative route. You should consider whether access on the carriageway can be preserved for cyclists, even if it needs to be closed to motor vehicles.

This is an appropriate response where we are actively enabling cycling, but I fear the message hasn't got through to enough people and it is the local highway authorities which need to make this more explicit as they have to be involved in the planning of road works.

In London, Transport for London consulted on an appendix for it's London Cycling Design Standards to give more advice on assisting people cycling through road works. It was by no means comprehensive, but it was useful and sadly didn't make it to the final document (I don't know why).

Part 3 sets out the equipment road workers will need such as hi-visibility clothing, basic signs which should be carried in their vehicles (or readily available for more complex schemes), pedestrian barriers and ramps, and the conspicuity requirements for road works vehicles.

The other useful piece of information is that every road works site should display a sign explaining who is undertaking the works (promoter and contractor) and an emergency contact; you'll often see a "permit" number as well which is a unique record of the works used by the local authority for coordination purposes (and viewable online). 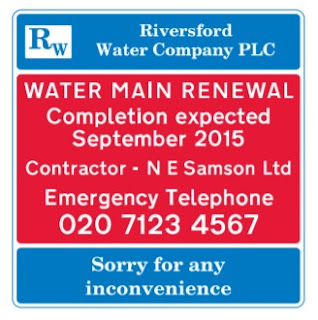 As well as the link to the document I gave at the start, you can also get a hard copy which is useful to carry around if you are as sad as me!
Posted by The Ranty Highwayman at Sunday, March 26, 2017