Earlier this week, I had a day off to go for a trundle around Central London. It was partly to just get out and get some fresh air (relatively) and partly to take some photos and video of interesting "streets" things.

This post is about one of the things I saw - the link between Meadow Road and the A202 Kennington Oval (which is the southern end of cycle superhighway CS5). The link forms part of London Cycle Network Route 3 and from my limited use of a section of it, forms a fairly useful route - certainly at peak times, I'm told it gets quite busy at peak times.

The link goes through the Ashmole Estate which is owned by the Metropolitan Housing Trust and over the last few weeks, this little link has become locally controversial because of some staggered barriers installed across the link, nominally to slow the speed of people cycling, a subject which come up a fair bit. I do understand their predicament, having played the barrier game in the past.

The first question I guess is whether or not the link is a suitable place to funnel people cycling through, but presumably LCN3 comes from the point in time where we did everything except provide for people cycling on main roads and so we end up with back street compromises. That's not to say that low (motor) traffic links aren't useful - they are. In this case, the wider estate to the southwest of The Oval is poorly permeated, so this is an important access for people walking and cycling anyway. Here is a video of the link as it leaves/ enters CS5;

The good news is that the barriers are due to be removed following some fervent local campaigning and so my comments here are about thinking a bit wider on what could be done here to improve the link with relatively modest expenditure. 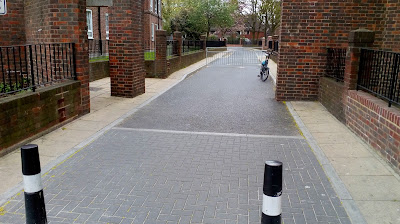 The photo above is the view from the A202 end of the link. Just in the foreground there is a pair of bollards I assume are there to stop people driving through - the bollards themselves are poorly placed and help create some conflict. Just beyond, you can see the pillars of a brick archway above the entrance to the estate and beyond, the offending barriers. 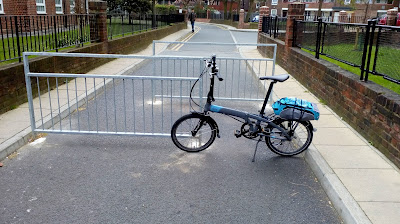 This next photo is at the barriers themselves. They are standard 2 metre panels and so with my bike for scale, the distance between the kerbs is 3.1 metres - this would be perfect for a 2-way cycle track! However, we then have the paved margin on either side. I say "margin" as they are not wide enough to be footways and so people cycling and walking are lumped together. The margins are formed with 600mm slabs and the kerbs are 125mm wide (yes, I forgot to take a tape measure - doh). So we have a corridor of about 4.5 metres to play with. Now, we could just remove the kerbs and maximise the width of a shared path, but we can do better I think. 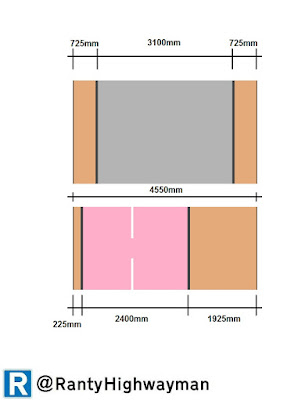 One way this space can be divided up is to provide a 1.8m footway and a 2.4m wide cycle track. Allowing a narrow strip on one side would help keep people cycling away from the walls which flank the link. We haven't widened anything, just reallocated the space that's already there, so there is clear space for the two modes using the link.

We can use forgiving kerbs between the footway and the cycle track to maximise the usable space and it would allow mobility scooter users to easily move between both. 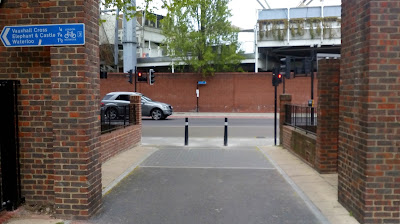 The complication is the arched entrance to the estate which creates a pinch point (see above), taking us to about 3.5 metres. So, the first obvious thing to do is to get rid of the arch. I don't believe the arch is protected from a heritage point of view and so the bull-in-a-china-shop engineer in me says knock it down. It provides a bit of a hiding place for miscreants and so it's removal would help open views for all users. Here's a still from a video I took of the location; 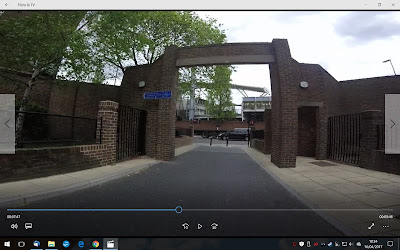 Take another look at the photos with my bike in it. Clearly, we could demolish the wall on the left of the shot and build a nice wide footway there - it would be on the opposite side to the car park entrance which is further up - in fact there is space to build decent footways on both sides if the money were there to move the boundary walls back!

There is a concern about conflict as people cycling enter the main road to join CS5 - this area is a large Toucan crossing with an area shared by people walking and cycling. We could just end the link track with a shallow ramp, provide anti-car bollards about 4 metres into the link - one in the centre of the track and one on the edge of the footway. With a 2.4m track, a 100mm bollard is going to leave 1.15m either side which is tighter than the minimum 1.5m clearance we want, which isn't great I know (and I've left out tactile paving which visually impaired people would rely on). However, setting the bollards back allow people to turn from CS5 before encountering them.

The diagram below shows how this would work. You can see that people cycling from the left are on the start of the track section of CS5. For people cycling from the right, they turn left and use the Toucan to access a bus lane on the other side of the road (look at Streetview here). The diagram excludes the two-way road, but because of the arrangement here, a Toucan is probably the pragmatic solution. LCN3 flows between the top of the diagram and the right of the diagram. 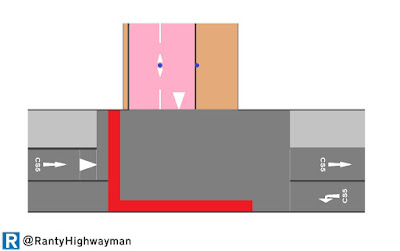 OK, we've repurposed the space we have, got rid of a superfluous arch and so not spent too much money. Let's develop the concept a little further. You will see from the photos and the diagram above that the link joins the main road at sharp corners and this means the visibility isn't great; here's the view from my video camera which is at 1.1m above the ground; 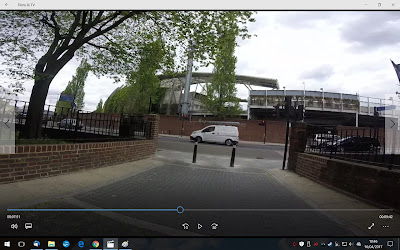 My eye height is of course above 1.1m, so I could see through the railings but some cycles will have the rider eye height lower than this of course. The brick walls on which the railings sit are about 0.75m height. In other words, visibility is not great in terms of being able to see small children - a toddler's eye height will be around 0.8m above the ground.

Design guidance for such situations tends to be from a driver's point of view. Manual for Streets 2 (p79) talks about context (traffic flows, widths, pedestrian activity etc). In this situation, I'd advocate opening up the visibility because of the conflicts which will be most serious at peak commuting times. Cutting the walls back would help of course and perhaps making the current shared area a little larger and paved in the footway materials to help reinforce pedestrian priority, given that we are linking to a Toucan (I've not shown the signals control cabinet which might need to be moved); 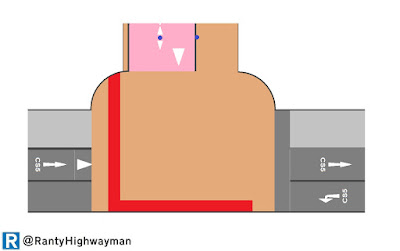 Beyond this, we are probably into a much larger scheme which would change the crossing arrangements and the layout of CS5 which is a 2-way track on one side of the road. However, we could certainly improve on what is there at the moment.
Posted by The Ranty Highwayman at Sunday, April 16, 2017