As of March last year, we were given a new tool in the highway engineering box and we are starting to see them popping up - the parallel zebra crossing.

The changes to the UK traffic signs rules; the Traffic Signs Regulations & General Directions 2016 (TSRGD2016), brought parallel zebra crossings into being, although a couple of local authorities did sneak them in before they were properly lawful. You may also be interested in this old (unpublished) study commissioned by Transport for London which looked at people using zebra crossings on bikes. The definition of a parallel crossing is as follows; 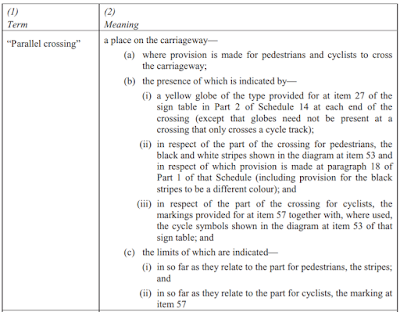 OK, it's legalistic, but essentially it defines it as a zebra crossing which everyone will be used to with Belisha beacons (the flashing yellow globes on black and white poles) and black and white stripes on the road for pedestrians;

The bit that makes it "parallel" are the "markings provided in item 57" - that is the large square "elephant's feet" markings. As an aside (b)(i) has an interesting point about a parallel crossing going over a cycle track not needing the globes. A parallel crossing over a cycle track is quite a thing and I am not sure anyone has done this yet! Anyway, the "elephant's feet" look like this;

The above mentions "item 28" and this is the familiar cycle road marking (it is optional, but I think it's worth using);

The general layout is as follows; 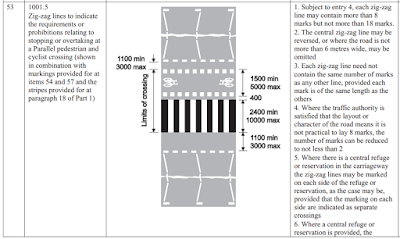 OK, I've zoomed in and spun the layout round to make it more like what people walking and cycling would see; 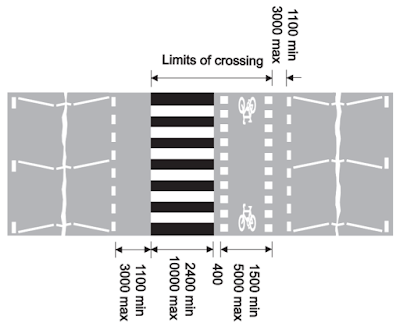 At the moment, we don't have any guidance on how the crossings should be designed, this will (hopefully) be included in the new Chapter 6 of the Traffic Signs Manual which will deal with "traffic control" - most of the other chapters are currently being rewritten to reflect TSRGD2016.

Parallel zebra crossings operate in exactly the same way as ordinary zebra crossings do in that drivers (or cyclists) on the main carriageway have to stop (and be prepared to stop) at the crossing give way lines to let people on the crossing, well cross;

In other words, if someone has stepped onto the crossing, they must be allowed to cross and if someone has cycled onto it, they must be allowed to cross too. There was a concern when parallel crossings were proposed that we'd end up with people cycling straight out across them, heedless of traffic. It's a theoretical issue, but the general approach is that those about to use a crossing should have an awareness of the traffic and act reasonably. In practice, I think the issue will be the same as pedestrians experience and it will be poor driver behaviour being the issue.

Until we get the new guidance, I think there are some principles we should consider;

Speed on main carriageway
As with ordinary zebra crossings, parallel zebra crossings are not suitable for roads with traffic speeds about 35mph. Even if there is a 30mph speed limit, it doesn't follow that this will be the speed at which drivers choose to travel.

Visibility
There needs to be reasonable visibility. This obviously applies to drivers (and cyclists) on the main carriageway being able to see people about to cross, but people cycling will not be standing close to the kerb, they will be sat further back. People riding adapted cycles and non-standard will be say even further back. For example, when I sit on my cargotrike, my eye position is about 1.3m from the front of the box and I'd sit back from the kerb a bit too. 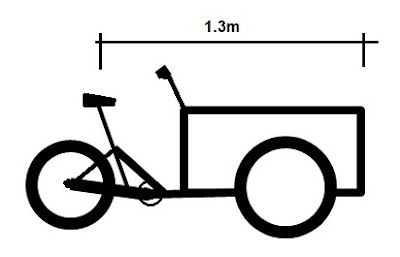 Level crossing point
As with ordinary zebra crossings, we can place parallel zebra crossings on a flat-topped road humps. This means that people won't have to drop down into the road and then back up the other side which reduces comfort and convenience, especially for people riding adapted and non-standard cycles. Making the crossing experience better for people who might suffer pain with bumps or struggle with slopes will make the experience great for everyone.

Avoid convoluted turning
A few of the parallel zebra crossings I have seen (and experienced) require people cycling to turn at the last minute in order to cross the road. Where the cycle track runs parallel to the road (be it shared with people walking or a separate track) it will require people to look over their shoulder if they are cycling in the same direction as traffic; 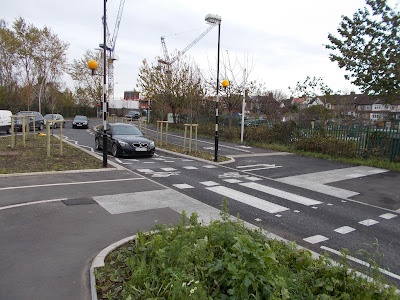 The photo above is of a parallel zebra crossing at Marshall Road, Waltham Forest. For people coming towards the crossing parallel to traffic (where the car is in the photo), they have to look over their shoulder as they approach the crossing. A buffer has been provided between the road and the cycle track in an attempt to have people on cycles approaching perpendicularly to the road, but it is not quite wide enough. In mitigation, the crossing is on a hump and the one-way road is narrow to keep driver speeds low.

Where a parallel crossing is used on a cycle route which crosses a road, the arrangement works better because people arrive at the crossing perpendicularly to the road like this example from Hackney where Martello Street meets Richmond Road; 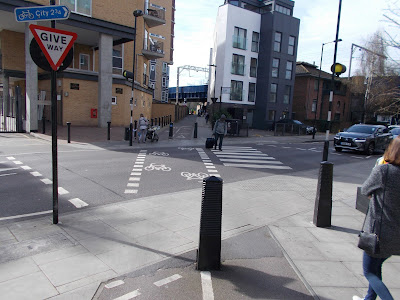 OK, it's not quite perpendicular, but you don't need to look over your shoulder to cross the road. The cycle route has been there a long time and the "give way" sign is a remnant of when people cycling had to give way to traffic. The parallel crossing here has also benefited people walking.

Parallel means exactly that
There is one very annoying thing about parallel crossings - they have to be parallel! This means that if the pedestrian and cyclist desire lines are not the same you can't adjust them to suit. The stripes and elephant's feet are set in the regulations as being 400mm apart which is also a pain.

Think about how people walking may be confused
Visually impaired people require tactile paving to assist with crossing the road. We shouldn't be placing tactile paving on the cycle part of a parallel crossing and so this all needs careful thought to make sure that we don't create confusion for people on foot because at worse, we could be leading some people into a trap. 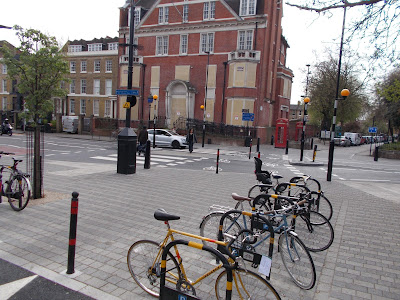 The photo above is the view from Clapton Square in Hackney, across Lower Clapton road. In this example, pedestrians leaving the side road on the left footway would have the pedestrian part of the crossing in front of them on the left side of the photo and a kerb if they left the right footway. For visually impaired people, this is an important design feature. The other thing just to note with the crossing above is that there is a refuge, but it is rather narrow for cycles.

I also think that maintaining the footway helps explain to people cycling that they do have to cross pedestrian's space before they get to the crossing.

Tidal traffic flow
As with ordinary zebra crossings, if traffic flows are heavy in one direction, then there is a risk of people being "masked" as they cross between the slow moving vehicles into the free-flowing traffic stream. Notwithstanding the fact that drivers (and cyclists) using the main carriageway should expect to see people crossing, this is still a safety risk. We sometimes mitigate this with a refuge (meaning the crossing is treated as two, distinct parts), but with some cycles being very long this is going to be less practical. In those situations, we need to push the distance between the stop line and the crossing position towards the 3 metre maximum to give maximum visibility.

Lighting
It should go without saying, but lighting at night is crucial for safe operation. Specific zebra lighting should be used which Illuminates the verticality of people, rather than on plan.

Local education
It's not really a design principle, but the new crossing has been released into the wild with no national marketing campaign. Compare this with the current campaign to educate motorway drivers that they shouldn't drive in a lane with a red 'X' above it. I assume it's the usual government leaving it to local authorities plan, so perhaps there needs to be local publicity to explain how these new crossings work.

That's my general thoughts on how we should design parallel zebra crossings, but I I think some sketches might also help. First, the sketch below shows how I would lay out a parallel zebra crossing where a cycle track route crosses the road. The crossing itself is humped (zig-zags omitted for clarity) and the track stepped below the footway running left-right. Because of the step, there is a very gentle ramp up to the main footway which is continuous across the track. 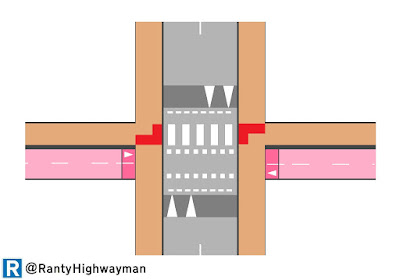 A variation on this will be the crossing at Clapton Square which connects a side road (Clapton Square) to a cycle track on the other side of the road. We can take the opportunity to connect the route with the crossing and perhaps provide some landscaping within the closed side road; 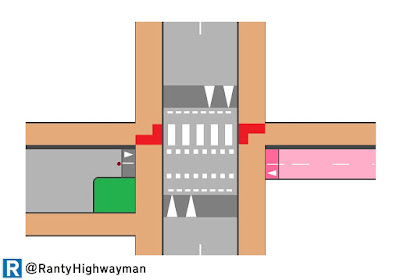 We can go a bit crazy and have all traffic coming out of the side road, but let's make drivers turn left; 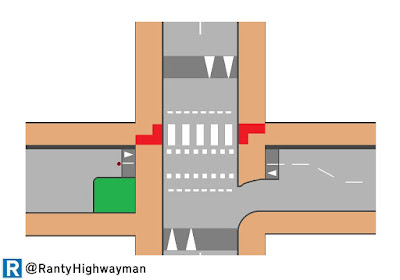 OK, the last one might be a bit more tricky as to get into the right position to cycle right to left, one would be taking the lane in the side road (which would be fine in a quiet street). My point is there are lots of options and of course each situation would be different. The next level up would be using a series of parallel zebra crossings on a roundabout, but you'll have to wait until Cambridge builds the first one to see that let loose on public roads!

Update 2-4-17
In response to the question below about giving pedestrians priority across, I guess we could do something like the sketch below, but it seems over the top to me. How do we get some people on bikes to slow down for people on foot? Welcome to the world of design! 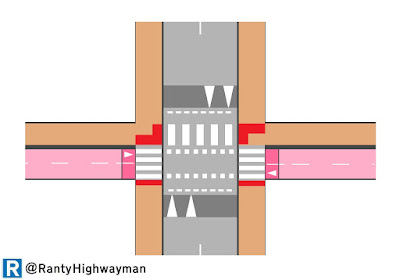 Posted by The Ranty Highwayman at Saturday, April 01, 2017