People are poor judges of risk. This is being played out in the media following the horrific events they have been playing out to us over the last few weeks.

We've had terrorist attacks in Manchester and London; and then Grenfell Tower Fire this week. Before I carry on, I must acknowledge recognise the enormity of the situations. We have had many people killed and the lives of their families and friends changed forever. With that pause for reflection, I must set emotion to one side and look at how we treat risk.

With the vehicle attacks, the perpetrators chose a very visible and every day way in which to commence their attacks and so the reaction of deploying barriers on bridges across the Thames seems like a reasonable response from preventing it happening again. In fact what has happened is that in particular, people cycling have been adversely impacted every time they cross the bridges - either on cycle tracks getting pinched at control points or by exposure to motor traffic where they cannot escape onto the footway (plus some people will have switched from tracks to road as well).

For people walking, they are also inconvenienced at the pinch points. This happens every time someone crosses the bridges on cycle or foot now. The photos below by Danny Williams and Natalia Marczewska show the situation this has caused at Blackfriars Bridge. 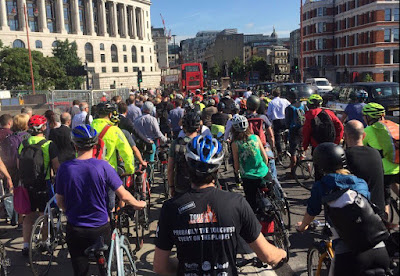 The use of truck-resisting bollards can be seen around government buildings and transport interchanges and I have covered this before, but essentially we again cause problems for every day travel and this disproportionately affects those with visual and mobility impairment. For example, look at this crossing outside the Department for Transport; 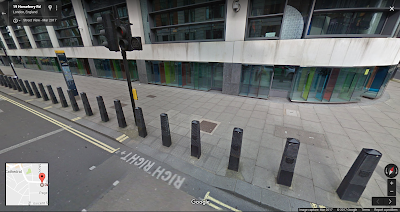 If there is real concern about vehicle-based terrorism, then perhaps the answer is to filter the streets to protect more than just the people inside the building rather than impact people every time they use the crossing; or redesign in such a way that drivers physically cannot gain any speed. Of course, we cannot design out acts perpetrated on-street by people on foot which seems to be a little bit of an elephant in the room.

We still manage to kill and injure over 180,000 people on our UK roads each year, not to mention those dying from transport-related air pollution and inactivity from not using or being enabled to use active travel modes. Apart from professionals, campaigners and those affected, we don't get much of an outcry into this scandal. We don't see interim measures being deployed quickly to protect people, we don't see calls to reduce and remove motor traffic from town and city centres. The comparison between a vehicle-based terror attach and every day life could not be starker, even though the latter is more likely to affect you statistically.

In Manchester, the attack was starkly different. The perpetrator set off a bomb he had attached to himself inside the foyer of Manchester Arena. At the point of attack, it's only going to be security personnel who can stop or reduce the impact and so in reaction (at the venue) it will be more searches of bags, metal detectors, body scanners - airport style security in fact. There has been some criticism of the security at the Arena. Perhaps tighter security at visitor attractions is just part of the price to pay - of course, access to buildings is orders of magnitude easier to control and protect than public streets.

Then we have the fire. It's still under investigation, but all of the expert opinion I have read pretty much agrees that the fire should not have spread like it did and many are pointing to similar fires in response to which very little has been done. In fact, the Government has been criticised for a go slow on a building regulations review. Much of the non-expert option is telling us to wait to see what happened and not to jump to conclusions. Frankly, this is making those caught up in the tragedy even more upset and angry.

So what does this all have to do with risk? Fires and crashes can be investigated and causes found (either conclusively or evidence-based speculatively). It is possible to change designs or the design approach to deal with the potential risks; and measures which protect the most people are the best to invest in. Terrorism is much harder to deal with from a design point of view because frankly, there are so many ways to hurt lots of people. The trouble is that terrorism is headline grabbing and so the calls to do something are louder despite individual risk being infinitesimal. By the time anyone tries to bring reason, the media are onto the next thing.
Posted by The Ranty Highwayman at Sunday, June 18, 2017