I've seen things you people wouldn't believe: Part 8 - All good things must come to an end

Well, all good things must come to an end and this week's post will be my final one from the Netherlands. It's an assortment of things which I thought were interesting, but probably not worth a post on their own.

Roadworks
OK, perhaps I could have made this into a post because I saw lots of roadworks, with much of it linked to new development. The interesting thing is that the Dutch seem to favour putting in the infrastructure before people have moved in rather than the UK approach which is often the other way around. 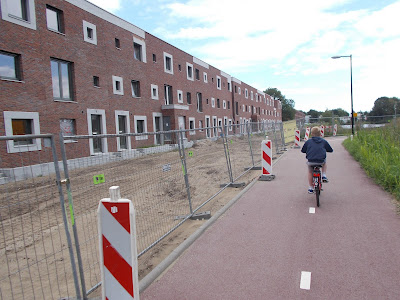 This housing development in south-east Amsterdam already has cycle track access which has probably be in a couple of years given the asphalt has faded a bit. 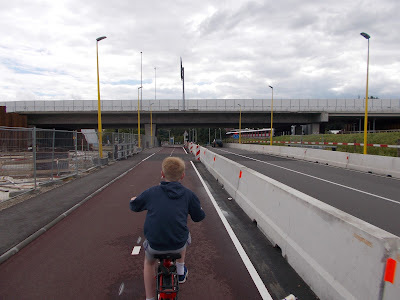 Some large motorway construction (widening of the A9) in south-east Amsterdam, but cycle access is maintained through the works. In fact, people cycling are well-protected with concrete barriers. 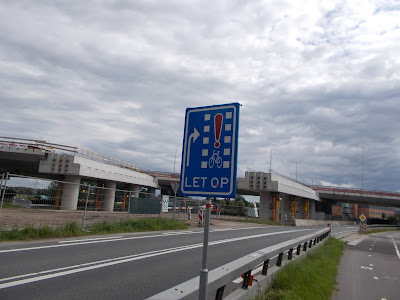 "Pay Attention" - a sign aimed at construction vehicle drivers turning right into the site access ahead. Compare with the UK which makes the vulnerable user responsible for looking out for traffic. 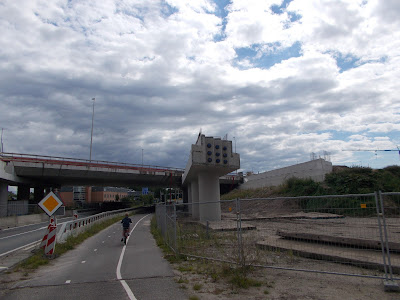 The scheme involves some heavy civil engineering and is another example of how the Dutch are building roads. That's right, in the land of the bicycle, there is a lot of motorway building going on. 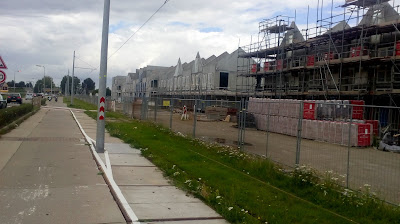 In another part of the city, more housing is being built. The cycle track here is a series of precast concrete slabs laid as a temporary route. The tram line in the grass isn't a relic of a former industrial area it is already in place (connecting to the tram depot outside the city). 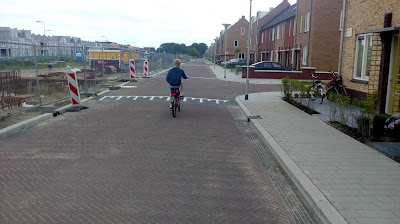 Where there isn't a cycle track, people cycling divert onto new residential streets while reconstruction works on the main road takes place. 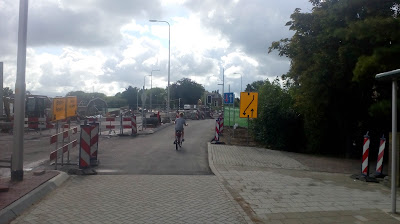 On the outskirts of Driemond a junction and bridge is under reconstruction. Of course, there is a route through for people cycling. 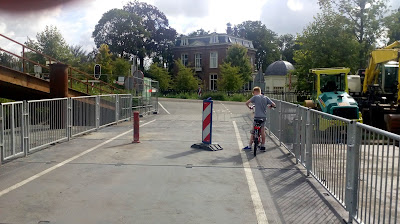 The diversion includes a floating pontoon for people walking and cycling. Since we visited the works are complete, but the project has it's own Twitter feed!

View from the driver's seat 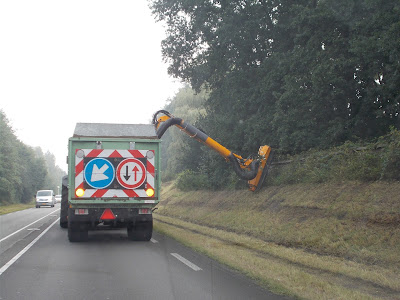 It's not cycling infrastructure, but here is a cheeky snap of a maintenance tractor with a multi-use cutting boom being used to deal with grass and the hedgerow. Mrs RH kept getting bugged to keep the camera ready because I am "that much" geek! 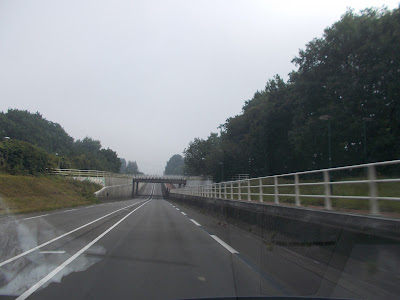 I can't remember where this is, but the road here dives under a railway line. Given how flat much of the Netherlands is, you'd think it would be full of level crossings. But no, this underpass designs out danger from road/ rail incursion and designs out delay to both modes. The usual cycle track is on the right which also dives under the railway, but only as much as required by a cycling headroom. 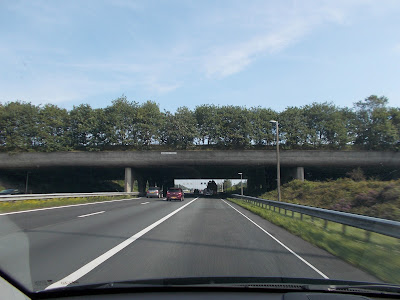 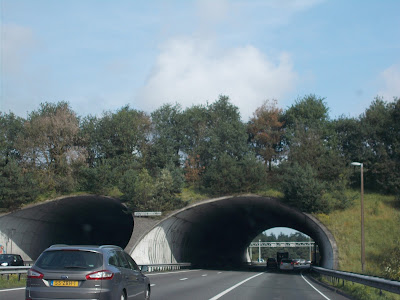 The "bridges" above are called "wildwissel" and are used to provide wildlife corridors over large roads. The lower one is Woeste Hoeve near Apeldoorn. 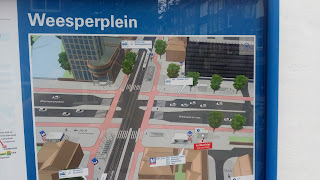 I thought that this map at Weesperplein Metro Station in Amsterdam was a mock-up of a proposed junction redevelopment scheme. It wasn't, it's a wayfinding map to get you from the station to the correct bus stop. It's also an example of a large city junction. 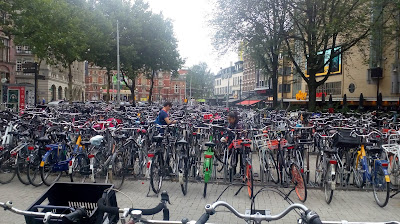 As you might expect, in a nation where so many journeys are made by cycle, the odd parking space is needed. This one at Kleine-Gartmanplantsoen in Amsterdam is rather large! 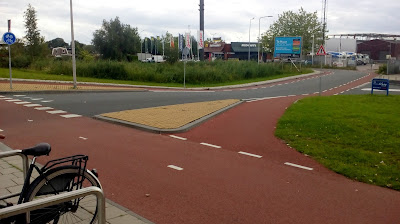 For cycling, it's the attention to detail I liked. Here, we have a two-way cycle track passing a retail park. the track is inset from the main road so that drivers turning in can stop before the enter the site because the cycle track has priority. The track then has little protected slip roads into and out of the site where it becomes an advisory lane within the retail park. 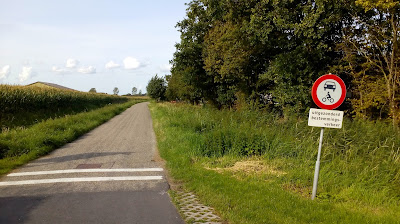 On the edge of Hengsdijk, we have a road on which through-traffic (including motorcycles) is banned, unless you have a right of access. You can of course cycle along here - in fact this is the cycle route as the parallel road doesn't have a cycle track and so cycling is prohibited. 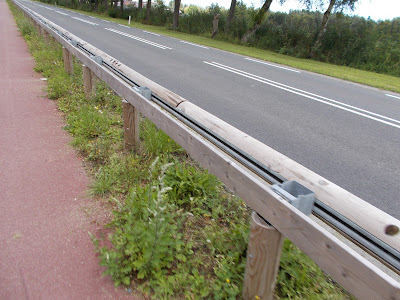 Nothing to see here, just a timber fence. Well actually, it's a timber-clad crash barrier (or safety fence) along Provincialeweg on the edge of Amsterdam. Another recently upgraded route with a new cycle track surface and the crash barrier protecting drivers from ending up in a ditch to the left and giving high levels of protection to people cycling. 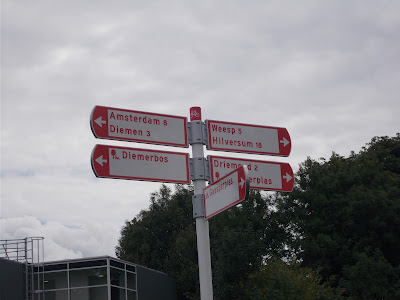 I didn't always grasp the full skill of the Dutch cycle destination signs, but getting lost didn't happen (well not too much anyway!)

The cycles
When in the Netherlands, ride a Dutch cycle! So we know that the cycling infrastructure is safe, comfortable and forgiving, but what about the bikes? I got to ride three different models. 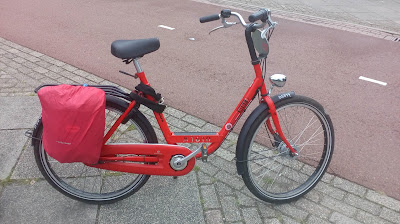 Amsterdam saw me in charge of two cycles. First was a Batavus Personal which is essentially built like a tank and weighs as much. However, I loved riding this bike as it was really comfortable. An ideal city bike really which might be why Abellio use them for their Bike & Go rental scheme in the UK. 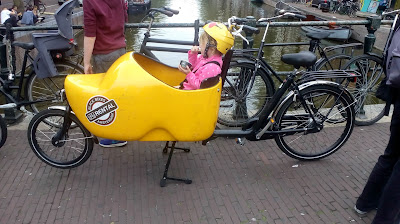 This piece of bakfiets (cargobike) clog lunacy from Black Bikes was a great way to transport #TheDoodle around the city. We had a choice of this or a conventional bakfiets; and it wasn't until she had picked this and we had got out of the shop before I realised what it was! It took about 10 minutes to get used to it, after which we rode around (with stops to look at stuff) for over 5 hours as we cycle-wandered around the city. She even managed a nap! 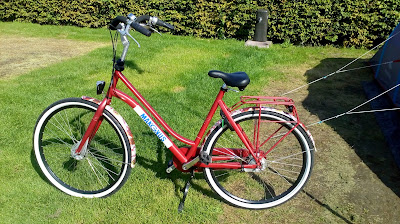 This is a Cortina Roots bike which I had in South Zeeland. For some reason it is marketed as a "ladies" bike which is daft because it was an absolute joy to use. The frame was nice and big for me and being lighter than the Batavus, it was easier to ride the longer rural journeys. I also had one with a child seat on the back for #TheDoodle. My next bike has to be Dutch!

THERE'S A FREAKING CYCLE TRACK THROUGH THE MUSEUM! 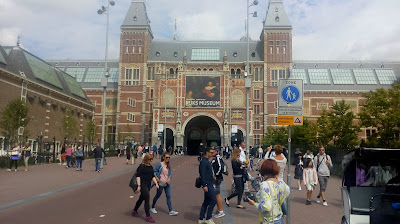 So, I didn't actually go into the Rijksmuseum itself, but with #TheDoodle in the clogbike, we cycled through the middle of it. Oh yes.

The end (for now)
As I said at the start of this series, there was a health warning because the things I have written about have come through a tourist's eyes. I cannot possibly know the minutiae of Dutch highway engineering from a fortnight. However, the trip has been a revelation (and that's about as divine I get).

As a designer, the genie escaped the bottle after seeing some of the best UK cycling infrastructure. After my trip to the Netherlands, the genie is half-way to the German border. On a magic bakfiets.

The other parts to this series are as follows;
Part 1 - Introduction
Part 2 - Magic Roundabouts
Part 3 - A City Road & A Side Street
Part 4 - Time & Space
Part 5 - Longer Distances
Part 6 - A Maastricht Treat
Part 7 - Cycling Culture
Posted by The Ranty Highwayman at Saturday, November 18, 2017