Silvertown: Another Road To Nowhere?

The Mayor of London often talks about the challenges the Capital faces with air pollution and he backs a £1b tunnel in East London. In this week's guest blog post the Silvertown Mole goes digging in the SIlvertown dirt so you don't have to.

What is the Silvertown Tunnel?
It's a proposed £1bn twin-bore, four lane tunnel between the Greenwich Peninsula & Silvertown. But, effectively, it's a doubling of the existing Blackwall Tunnel; or you could see it as a massively expensive road widening scheme, widening the Blackwall Tunnel from four lanes to eight.

What's the point of widening the road at Blackwall from four lanes to eight in the most expensive place possible when the approach road to the South has only six lanes?
Good question. Unless TfL have some massive road widening project on the A12 they haven't told us about, at least two lanes worth of this new capacity will never be used. (And, as it turns out, even using the other two lanes fully makes things worse..)

So, what's the purpose of the tunnel?
Fourfold, according to TfL;

1) To relieve congestion at the Blackwall Tunnel,

4) To enable new cross-river bus routes. It also aims to do all of this without a significant increase in traffic or pollution.

Will it achieve these objectives?
It will likely achieve the first two.

TfL aim to double traffic capacity across the river, but not allow any actual increase in traffic.

Won't traffic increase sharply when drivers no longer have to queue?
TfL will toll both the Blackwall and the Silvertown Tunnel. In their estimation, the level of the toll they propose will almost exactly compensate for the removal of queues. (see http://content.tfl.gov.uk/st-silvertown-traffic-forecasting-report.pdf P33); and with the tolls in place, they estimate that instead of 100K vehicles a day taking the Blackwall tunnel 75K will take Blackwall and 25K Silvertown.

So, effectively, instead of drivers at peak hours waiting in a queue, nobody will queue and drivers at all times will pay a toll?
That's basically it. 'In terms of capacity: The Silvertown Project adds 100K vehicles/day of extra capacity to  Blackwall - but it only ever actually uses 10K of this extra capacity -  5K in the morning peak, and 5K in the evening peak (represented by the  green blocks above the black line in the images). (And, of course  similar congestion benefits could be achieved by using a smart toll to  redistribute these trips to times of day when Blackwall has excess  capacity - and one would save £1bn in the process). 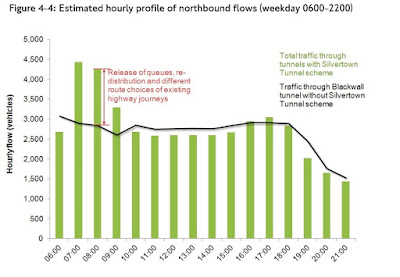 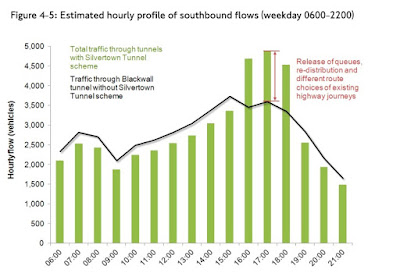 Does the project do anything to support the Mayor's active travel priorities?
Not really. There's a proposal for a cross-river cycle bus, but historically, at the Dartford Tunnel, for example, these kinds of services have not been successful (http://blog.nationalarchives.gov.uk/blog/ill-fated-cycle-bus/). And they can't take cargo bikes, zero emissions logistics vehicles, etc.

But the tunnel will enable new bus services?
Debatable. There are suggestions that the tunnel could enable new routes, but so far TfL only have user suggestions as to what these routes might be (https://consultations.tfl.gov.uk/rivercrossings/silvertown/#Further%20benefits) not data on actual demand. And there's only one bus through the Blackwall tunnel right now. Maybe delays reduce demand. Maybe there just isn't that much demand for short cross-river journeys at this point. TfL doesn't know, and they've only committed to research the question until the tunnel is nearly built.

OK, so, at Silvertown, TfL are proposing building a new tunnel that's capable of carrying 100K vehicles a day, but that will only ever actually be used by 25K/day? How does that make sense?
Very good question.

Maybe, in future, traffic will increase due to growth in East London, and extra cross-river capacity will be needed? Shouldn't we provide for the future?
Well, perhaps. But the tunnel is being built on an explicit promise that traffic (and pollution) won't go up in the future, and that the toll will be used to hold it to existing levels. (https://consultations.tfl.gov.uk/rivercrossings/silvertown/#User) That promise was key to planning consent. And to the health of surrounding communities.

So, the tunnel can't enable growth in East London?
Not if growth implies increased traffic, & TfL holds to its promise not to let traffic & pollution increase.

Ok, so let's say we believe TfL's promise that traffic levels won't be allowed to increase. Why, then, are they building this tunnel with capacity of 100K/day to take no more than 25K vehicles/day? Isn't there a cheaper option?
Well, yes. TfL could build a single-bore two lane tunnel with a bike & pedestrian pathway (and emergency escape) under the roadway. This will certainly provide all the extra capacity they think they need (for example, the single-bore Rotherhithe Tunnel carries 45K vehicles/day).

So would this single-bore option provide all the benefits of TfL's Silvertown Tunnel?
Pretty much, in terms of congestion & resilience. They might need to run this tunnel in one (reversible, according to peak) direction only for motor vehicles, for safety reasons, - but given that congestion in the Blackwall tunnel is tidal - northbound in the morning and southbound in the evening that won't impact congestion benefits.

It would require running any new buses mostly through the Blackwall Tunnel. But that's where most demand appears to be anyway. And, of course it would provide a new cycling/walking/zero emission logistics route that the existing proposal doesn't.

Is there demand here for a cycle/pedestrian route?
Good question. TfL analysed adding a cycle/pedestrian tunnel in their initial optioneering & decided it wasn't financially viable. But, since then, they've changed the way they analyse cycle demand, bringing in electric bikes, cargo bikes etc - but no-one has done a new analysis.

Did TfL ever consider/evaluate this option?
No.

Why not?
Your guess is as good as mine.

Ok. Let's go back to that toll. Couldn't TfL reduce congestion and queuing just by smart- tolling Blackwall?
Yes. But that wouldn't provide the resilience benefits of Silvertown.

Is resilience, alone, worth £1bn?
Good question. And one that, to the best of my knowledge, TfL haven't answered.

What happens if TfL have got their calculations wrong, and the toll isn't high enough to balance out the induced traffic from creation of extra capacity and removal of queues?
Traffic (and pollution) will increase.

What about the mitigation strategy in the Development Consent Order (DCO)?
Good point. For six years after the tunnel opens, TfL has to monitor environmental impacts, in consultation with the Silvertown Tunnel Implementation Group, and recommend mitigation strategies.

So, TfL will increase the toll, and traffic and pollution won't go up?
Well, it depends on the Mayor. TfL is obliged to investigate, and consult, and propose mitigation strategies, but according to the DCO (https://infrastructure.planninginspectorate.gov.uk/wp-content/ipc/uploads/projects/TR010021/TR010021-001716-3.1%20Draft%20DCO%20R6%20pdf.pdf) page 41, item 54,  the final decision on toll levels is the Mayor's.

So, in theory a future Mayor could remove the Silvertown and Blackwall tolls entirely?
Absolutely. At any time. They'd need to consult the public on the proposal, but it's an executive decision for the Mayor.

Would this be likely?
Well, it might not be popular with those living near the tunnel, but it might be very popular with drivers. And it's the kind of pre-election commitment mayors like to make. Like the removal of the Congestion Charge Western Extension.

So what happens if the tunnel is built and the toll is not increased in line with inflation, or reduced, or removed?
Traffic and pollution will increase. There won't be new queues at the tunnel (because capacity has been increased so much) - instead we'll see new traffic, congestion, and pollution in the surrounding area, as nearby roads and approach roads hit their own capacity.

Has TfL modelled what will happen if the tunnel is built and the toll is reduced or removed?
Yes. At least in terms of traffic, but not in terms of air quality It's here (http://content.tfl.gov.uk/st-silvertown-traffic-forecasting-report.pdf).  Look at page 52 onwards. The maps on page 58, 61, 63 give a good idea of what will happen to traffic (and air quality) if the toll is removed.

Their conclusion (P79): The option of introducing the Silvertown Tunnel without road user charging has some considerable negative impacts on the surrounding network, notably in Greenwich in the evening peak, and the impact over the three host boroughs as a whole mounts to no net improvement. While the no charge scenario shows improved resilience compared to the reference case, the high levels of traffic forecast throughout the day would in effect mean that the tunnels would struggle to recover from an unplanned incident. 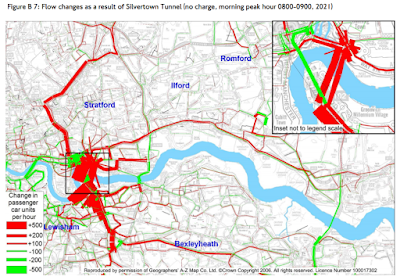 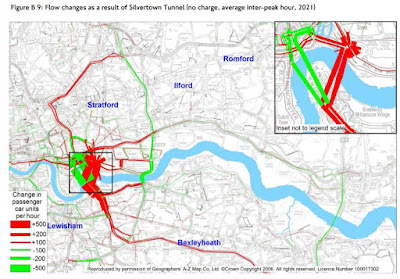 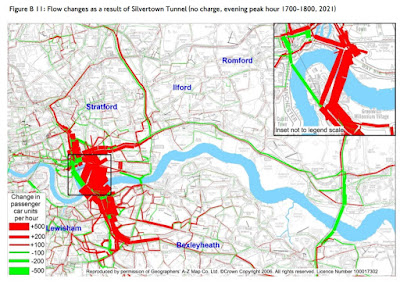 So if a future Mayor decides to remove the toll, the £1bn Silvertown tunnel will bring exactly no benefit whatsoever?
Correct. TfL's words, not mine. Though it will bring lots of new traffic (a back-of-the-envelope calculation indicates about 15-20K new vehicles driving through the tunnel and surrounding area), congestion, and air pollution.

Ok, so what are the conclusions here?
Depends on your priorities. But:

1) Whether they support a new crossing at Silvertown or not, nobody should be supporting the scheme TfL are proposing. There's at least one much cheaper (probably about £300m cheaper..) option that has essentially the same outcomes in terms of congestion, resilience & new bus options - and better active travel benefits. And it'll be East Londoners who end up paying for all the excess road capacity that's being created in TfL's scheme.

2) If you support any new scheme here, you've got to believe that the resilience benefits alone are worth the £700m+ cost (because the congestion benefits can be mostly achieved with tolls) - and that it's more useful to spend at least £700m on this than on schemes that might, say, enable active travel, or zero emissions logistics.

3) If you think that the scheme will contribute to growth in East London by taking new growth-related traffic then you've got to also accept that it can only do this if TfL breaks the promise it has made, and allows traffic, pollution and area-wide congestion to increase, and local communities to suffer.

4) If you think that any version of the Silvertown Tunnel can be built without a sharp increase in local traffic, pollution, and congestion, then you've got to also believe that all future Mayors will keep the toll high enough to restrict traffic, despite the electoral temptations of big giveaways to drivers..

5) If you think London's priorities should be 1) acting on the urgent climate crisis, and 2) air pollution threats to public health - then you should not support this scheme. Instead, a smart toll on Blackwall (or, better, on all of London's roads..) should be used to reduce congestion at peak, and the money used to enable public transport & active travel.