Controlling Parking Over An Area

I suppose this is a bit of a recap this week as I have covered parking control before, but I am currently doing some research for another design guide and I though it might be helpful to group some techniques together in one place.

One of the irritating things about UK parking management is that the underlying (general) position is that people can park where they like unless otherwise indicated which means we have to go through a legal process and spend money to establish control. Of course, there are some exclusions to my sweeping generalisation, but it doesn't matter for this post.

Specifically, I'm interested in controlled parking over an area rather than any 'spot' treatments and so we have three main ways to achieve this;
Each type of scheme is required to have traffic orders in place to be enforceable and in establishing traffic orders, a level of consultation is required which includes the UK quirk of us only having to consider written objections (and that's another debate).

Controlled Parking Zone
The CPZ is probably the most well-known area parking management approaches. At its core, we have a system whereby drivers are informed about the controls by large traffic signs as they drive into an area and these controls are reinforced by yellow lines (known as 'waiting restrictions') which prohibit parking during the operation times and signed parking bays which allow parking, depending on who has been given priority. 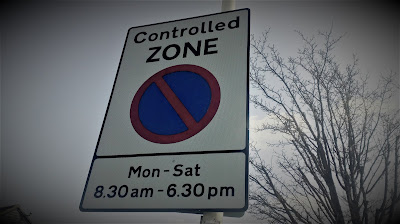 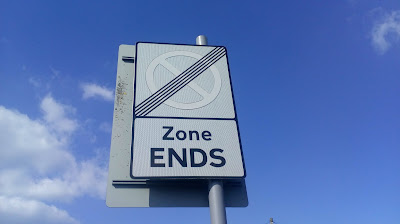 Each motor traffic entry and exit point requires the appropriate signs (as above). The entry sign will generally have the time of operation in the panel at the bottom (which should reflect the operational of the bays and yellow lines); a lack of panel means the CPZ is in continuous operation.

There are variations on the "Controlled" aspect which can be changed to "Pay and Display" and other items and loading can also be banned within the zone. Section 14 of Chapter 3 of the Traffic Signs Manual gives some of the more detailed advice.

It is possible to have yellow lines with different times of operation, but this then rather makes a CPZ pointless as they would have to be signed (apart from double yellow lines which don't need to be signed) and lots of waiting restriction time plates are needed which adds clutter. It is also possible to have bays operating at different times the the CPZ and because each bay has to be signed anyway, it doesn't make any real difference to the clutter. 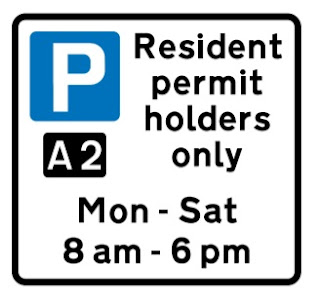 Bay within a CPZ - this variant is for resident permit holders.

However, in my view, it is far easier for people to understand if the zone, waiting restrictions and bays all operate at the same time with items such as double yellow lines, bus stop clearways and specific controls being included. Less complication is always better and people will be able to understand what is expected of them more readily.

Restricted Parking Zone
It is usual to see RPZs used in town centres rather than residential areas (although they can be used anywhere) and this is because they were originally designed for historic centres where it was felt that yellow lines would be unsightly or where materials (just as cobbles) don't take paint very well. 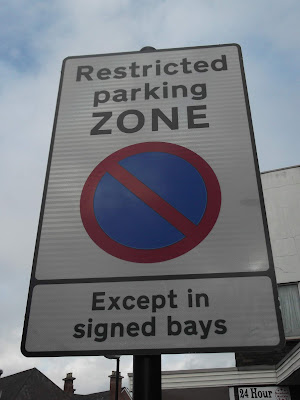 RPZ entry sign with no waiting allowed unless it is in a signed bay.

Like CPZs, RPZs have entry and exit signs, but the yellow lines of the RPZ are replaced by upright signs placed at regular intervals. Bays (for whatever purpose) are provided where parking and loading (and other activity) can take place and unlike CPZs, RPZs allow us to use materials in the surface of the street to 'mark out' the extent of the bay. Section 15 of Chapter 3 of the Traffic Signs Manual provides more detail. 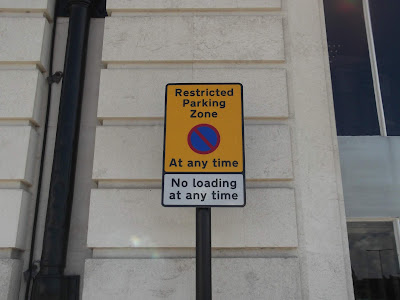 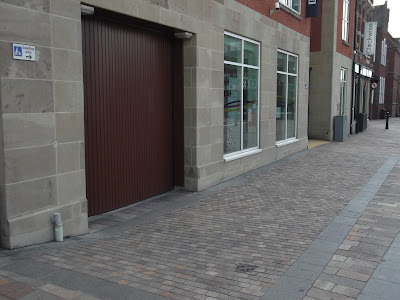 A loading bay which is marked out in a rectangle in front of the door/ windows with a loading bay sign (with arrows) at each end of the bay to show the extents.

Parking Permit Area
A relatively new idea, the PPA allows us to dispense with road markings altogether unless we need to explicitly control parking differently. The PPA essentially allows anyone with a permit to park anywhere passed a certain point which is marked with entry and exit signs. It is optional to provide repeater signs within the area and my view is it is worth providing some for clarify. 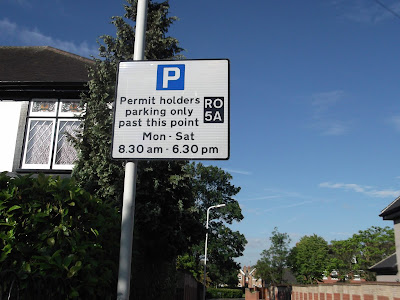 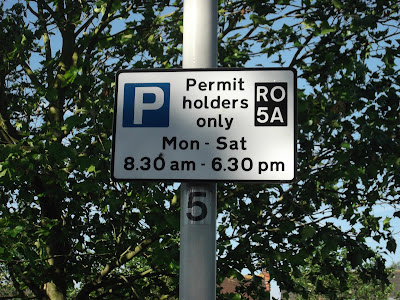 The PPA is intended for self-contained areas such as cul-de-sacs or places with low through traffic, but additional bays can be provided for non-permit holders if referred on the entry signs and by marked and signed bays within. For example, we might wish to provide some pay-and-display parking in a side street subject to a PPA to serve shops on a main road which is otherwise restricted. Section 13.10 of Chapter 3 of the Traffic Signs Manual gives more information.

These three systems are obviously suited to different situations, but they are useful tools to deal with area-wide parking management. I would always advocate keeping things as simple as possible because when we don't we create doubt and as well as being potentially unfair to the driver, we run the risk of any parking tickets being overturned at appeal. We must manage parking in our urban places and it's important to have an appreciation of the different ways we can achieve the same goals.
Posted by The Ranty Highwayman at Sunday, March 24, 2019