Even as I write this post, Quietway 14 is already out of date because London's strategic transport authority, Transport for London, is rebranding cycle routes simply as "Cycleways".

I'll leave the branding debate alone for now, but as it stands, only the western section of the route has been completed between Tower Bridge Road and Blackfriars Road; although there is a short section of work completed to the east of Tower Bridge Road - the route was going out to Deptford by replacing the existing London Cycle Network route 4. Hopefully we'll get a grip and stick with one numbering system.

In parallel (literally for a short section), Cycleway 4 has started construction at the eastern end of Tooley Street (photograph below) and perhaps it shows (at the highest level) that TfL is moving to a system of interventions based on the conditions - or cycle tracks on main roads and filtered side streets as a basic approach. Whether the quality criteria are good enough remains to be seen, although it seems to be letting some boroughs water things down. 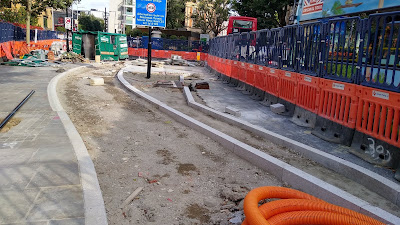 Anyway, back to Q14. As you can see from the map below from TfL's route mapping website page there is actually a bit of a grid forming in this part of London - perhaps 3km wide by 2km deep. Apart from old bridge protection kerbs on Southwark Bridge, CS7 is terrible, a legacy of former Mayor Johnson's paint'n'signs approach which really needs to be done again. Quietway 1 is OK, but flawed, whereas CS6 is world class for the bottom two-thirds of it's length.

As a summary, Q14 is for the most part rather good with hard-infrastructure being used where it is needed which demonstrates that it isn't all about the big interventions on main roads (we need both). It is a fairly direct route, it passes through residential areas for its customers and is passes small shopping areas such as here at Bermondsey Street; 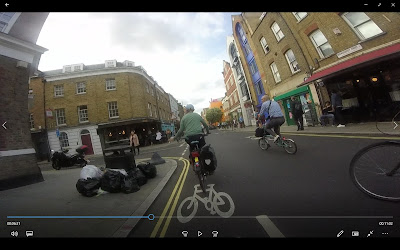 What some parts do need is more filtering and where there are little shops, there should be street upgrades to make more useable public space. 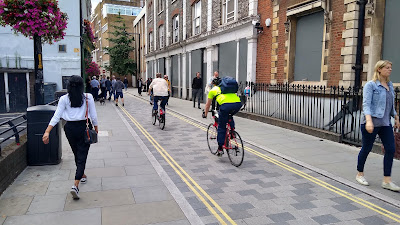 The photograph above shows Newcomen Street as it approaches the A3 Borough High Street (another main road needing cycle tracks). It used to be part of a cut-through for general traffic, but it has now been transformed into a little bit of mixed use space. It is still a cut-through, but the only traffic is human powered and it was just as busy with people walking as cycling on our evening rush hour visit.

As we were chatting, the manager of the Kings Arms overheard us. We had just seen a minicab being reversed out of the street and we were wondering if it needed a bollard. The manager said that they still needed to get cars to the end (there is a retained loading bay) and she thought better signage was needed. In my view, this could be achieved with a "no motor vehicles" sign with an access exception - at least deterring some. 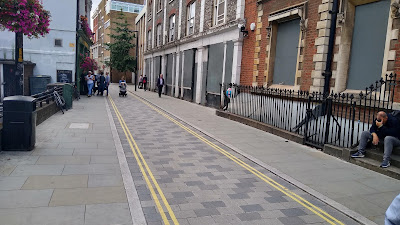 Still the space was being used by pub patrons and everyone got on with each other as is normally the case when you stop general traffic. In the photograph above, you can see a lady pushing a toddler in a pushchair, clearly not worried about people cycling though.

There are some awkward locations. The junction of Union Street and Steet Suffolk Street is awful. We were headed west and rather than Q14 carrying on along Union Street to Blackfriars Road (and so CS6), the route requires a right turn at the traffic signals. This area is really busy with general traffic and it wasn't pleasant - here's a still from some video I shot; 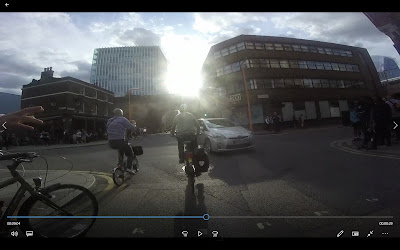 General traffic was mainly heading east, so turning right was only possible at the end of the signal stage which was no time at all. This area needs to be filtered and through traffic put back on the main roads.

Pictures paint a thousand words, so here's some moving pictures!

Posted by The Ranty Highwayman at Saturday, August 17, 2019