The Chislehurst War Memorial junction in Bromley, Southeast London is a good example of a layout where traffic control design has just evolved over the years and people on foot have simply been ignored.

Local campaign group, the Ashfield Lane Road Safety Group, has been pushing to have pedestrian signals added to the junction, especially as it's a location crossed by local school children.

The junction is formed by the A222 Bromley Road/ Bromley Lane and the A208 Centre Common Road/ Royal Parade. Despite being A-roads, 3 of the arms are single traffic lane approaches with Bromley Lane being a two-lane approach; 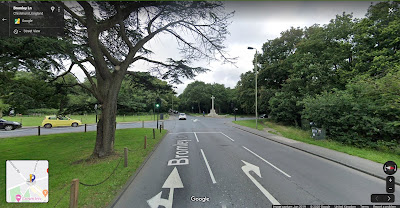 The junction is skew - that is, the arms are not at 90° to each other, they form a shape like the flag of St. Andrew; 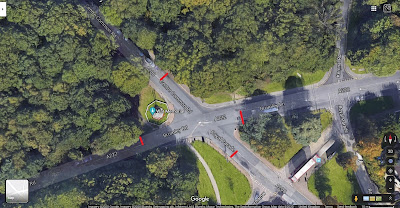 You might just notice the red lines on the aerial view above; that's me highlighting the position of the stop lines for traffic on the approaches to the junction. The narrow traffic lanes and fairly tight corners means that when large vehicles are turning, waiting drivers need to be set right back as the drivers of large vehicles need the full width of the road to turn and over quite a distance.

As the network, there's other, smaller roads further away from the junction which look to me that they will have a rat-running problem with some people driving to avoid the junction. The junction itself sits within the north of the pair of Chislehurst Commons which may well explain which the junction has never been enlarged - there's a local act of Parliament giving local management powers to a board of trustees.

Anyway, back to the junction. The method of control is quite simple with two traffic stages running with east-west traffic together and north-south traffic running together. At the end of each stage there will be an all red period to allow right turners to clear the junction before the next one comes in. For people wanting to cross the road, they either have to fine a gap in flowing traffic or to try and cross in the all red period.

So what is the solution for foot traffic? The narrow roads, limited space and the fact the junction is in the common means that it won't be widened and so the solution is to add a third traffic stage which would run an all-round green man. 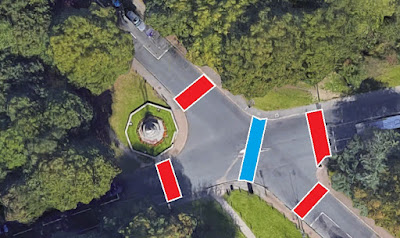 The image above shows roughly where I'd look to place the pedestrian crossings (red) to keep them on the desire line as far as possible, but away from the corners and turning traffic as well as where tactile paving would be a pain to detail. The blue crossing is an optional diagonal crossing on the shortest diagonal. The staging diagram would be as follows;

The diagonal arm has a 12m crossing distance and the longest side road crossing is Bromley Lane at 9 metres (the eastern arm of the junction in the image above). Crossing distance is important as it informs the time people have to cross and from a traffic signals design point of view there will be pressure to keep delay to motor traffic to a minimum, not only because the politics of all of this stuff, but also because delayed drivers will rat-run more.

There is a compelling argument to look at these issues in an holistic way at the network level (into which we bring cycling for transport), but in the short term, it would be relatively straight-forward to add a pedestrian stage, even if the diagonal were omitted, because it should be a basic level of human decency to provide crossings at signalised junctions.

I hope the local road safety group can push the council to work with Transport for London (the signals authority) to get green men added to this junction and hopefully this post will help explain what needs to happen.
Posted by The Ranty Highwayman at Saturday, February 22, 2020