This week, I'm returning to the Dutch village of Terhole which I visited back in 2017. It's a nice little place, but the reason to return is to have a closer look at the traffic calming in the village.

It's very interesting for me to go back and review some of my previous infrastructure safaris (which my family calls "holidays"), because with the passing of time, I've learned a little more and it's nice to go back and provide some more detailed commentary.

As is usually the case in the Netherlands, we cannot simply look at a place in isolation because over the years, road network changes have taken traffic away from the village. In 2003, a tunnel was constructed to the east of the area (to cross the estuary separating two parts of the Zeeland land mass) replacing the Kruiningen to Perkpolder car ferry to the north, (although there remains a foot/ cycle ferry).

The village itself was then bypassed with a regional road in 2004, the N290 Rondweg Terhole (Terhole Bypass), which meant that most through traffic had been removed from the village. This is interesting in its own right as the old road network remains essentially as service and access roads for farms in the area with links onto other small country roads; some of which are filtered to prevent through traffic access. 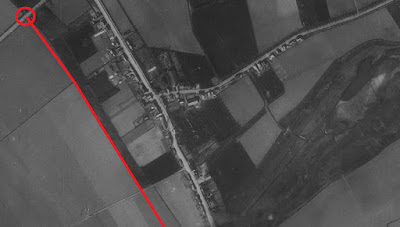 An undated aerial photograph of Terhole before
the bypass. This would have been a busy north-south route.
I've added the roundabout and bypass in red
Photograph from Terhole.info

The southern end of the village is accessed from a roundabout which connects with the N290; the use of the roundabout being a safe way of making the connection compared with the risks of priority junctions. At the northern end of the village there is another roundabout connecting with the N689, itself connecting with the N290 again 180m to the southwest. The N290 heads west (and is the route to the tunnel which crosses the estuary) and the N689 heads north to connect some towns and villages. 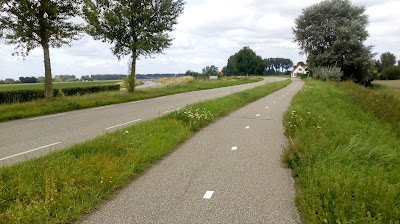 The N290 is on the far left with the old main north-south
road in the centre which leads to the village. A fairly standard
rural cycle track is to the right.

Although traffic through the village is now light, there was clearly a concern about driver speed. From the north, drivers leave a roundabout and immediately enter the village which has a 30kph (20mph) speed limit. From the south, it's some 1,300m from the roundabout from the N290. This approach has a 60kph (40mph) and so as is the usual case, there is a parallel cycle track; 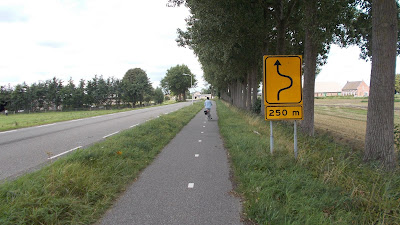 Hulsterweg, looking north. This is the bypassed
north-south road through the village. The N290 is 100m
to the east. The 60kph road means there's a cycle track.

The photograph above is a clue to what faces drivers a bit further up the road. Because of the long straight run to the village edge and despite the reasonably low 60kph limit, there's clearly a need to ensure that drivers slow down and so a village entry treatment has been built; 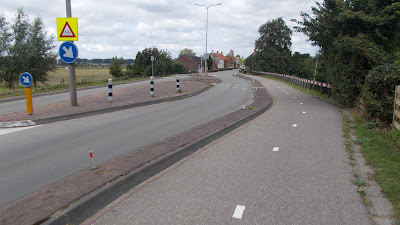 In essence, a wide traffic island has been provided and with the narrow running lanes and tight curve, drivers have to slow. Remember, we're talking about driving on the right and so the view above is looking towards the village. Outbound drivers still have to pass the feature, but it's not a tightly designed. The village boundary with the start of the 30kph speed limit is behind me. 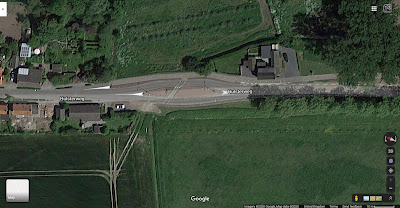 The image above is a Google aerial photograph of the area (north is to the left) and you can see the entry treatment's alignment). In terms of cycle traffic, northbound has people cycling joining the carriageway to the north (left) of the feature and southbound cycle traffic crossing the large island to join the two way cycle track.

In the image above, I have zoomed in and highlighted northbound cycle traffic in yellow and southbound in purple. The photo below is looking southbound, so you can see the alignment for drivers and cyclists coming towards me (into the village). The road alignment pushes drivers away (to the right in the photograph) as cyclists merge. For CROW Manual readers, this is layout V19 (for the cycling element). 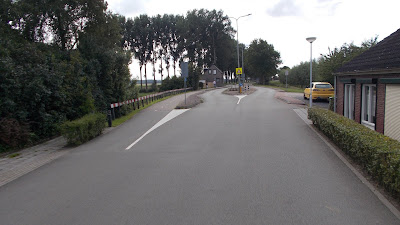 Those cycling south to leave the village cross at the island, but this is poorly designed requiring one to stay on the road and then swing left which would feel risky with a driver behind. The safer solution would be a left turn with a "jug handle" so one would split from the road to the right and then gently turn left before crossing the road in two parts. The photograph below shows this awkward approach and also that the island has forgiving kerbs for drivers. 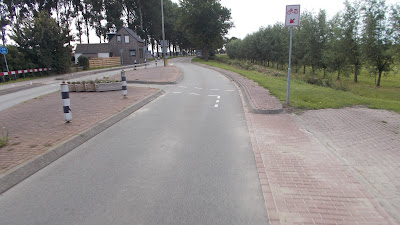 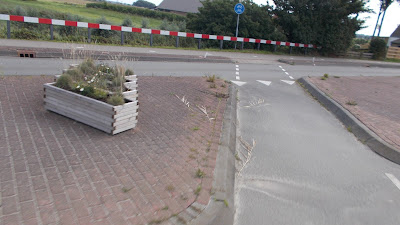 The photo above is as I was making the uncomfortable turn to the left from the road into the island. However, the second crossing point to join the two way cycle track is at an angle which means I have a good view of oncoming drivers and cyclists plus when I join the cycle track, my turn is only 45° which makes things more comfortable.

Within the village, there is no cycling infrastructure - there doesn't need to be because the road is kept narrow with car parking and planting arranged to make a straightish road a little more sinuous; 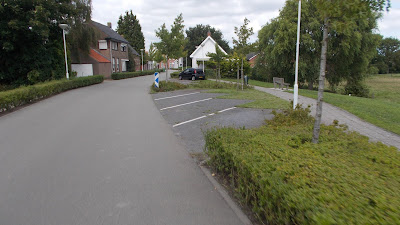 There's also a footway on each side of the narrow carriageway and the whole arrangement keeps drivers speeds low. You'll note the lack of centre line which is another cue that it's a different space. 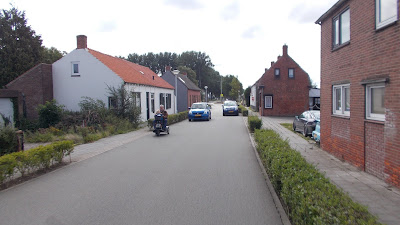 To the north of the village, cycle traffic rejoins a two-way rural cycle track, but it yet again requires a turn across the road which isn't ideal (below). 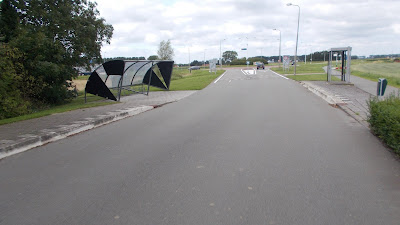 Finally, we're at the northern limit of the village with cycle traffic out of the way and drivers about to join the N689 at a roundabout junction (below). 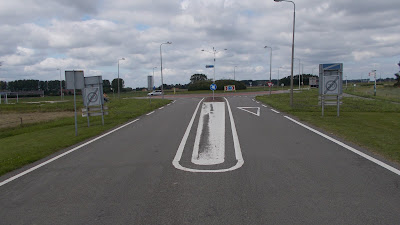 It's a little hard to read here (you'll want to open the image separately), but below is a schematic of how the environment changes from south to north through the village;

So, by way of a summary, here are the conditions which I think make this a successful arrangement;


* Subject to my criticisms of crossing the road to get to the cycle tracks in this case.

Nothing is ever perfect of course and the rural area to the east of Terhole has farms and hamlets, although most of the roads are narrow and are only going to be used by those requiring access. As such, there is no cycling infrastructure. It's an area worth looking at because over at Graauw, there is another entry treatment with a change from a 2-way to pair of 1-way cycle tracks not too far away on what must be a busier rural road, but there are no bypasses in the area.


This example is very easy to copy in the UK. Villages often have constrained highway width, but mixing cycle traffic is fine if the alignment and speed limit is correct. However, we have been very bad at providing cycle tracks along rural A-roads - I'm thinking of single carriageways here as dual carriageways shouldn't have cycle traffic anywhere near them, it should be a separate network.

The implication is when we are looking at bypasses or improving existing ones (whatever that means), a progressive approach would include building a cycling network along the bypassed sections of road, reworking village cores and ensuring there's investment to change other rural roads which in some cases will require land acquisition. Of course, then we're back into the politics and the mad business case arguments that the UK suffers with.
Posted by The Ranty Highwayman at Saturday, May 02, 2020