Even a weekly blog cannot keep up with the changes being made in some UK cities on some streets to help enable walking and cycling by giving people space to get exercise and to maintain physical distancing.

However, it's still a relatively small length of streets being treated and we've the triple-whammy of inertia stopping more;


I can't help much with the first and last point, although money is always relative in a local authority and political will is a euphemism for either can't be bothered or doesn't want change - a willing politician will ask for help.

Anyway, for council officers (and campaigners), I thought I would talk about the kind of materials which could be used together with a little help on assessing risk.

Materials
The cheapest material is paint and as well as cycle lanes, it can be used to mark areas and space; maybe to brighten up a piece of repurposed road on an interim basis until an area is redeveloped. Of course, paint along does not provide physical protection. 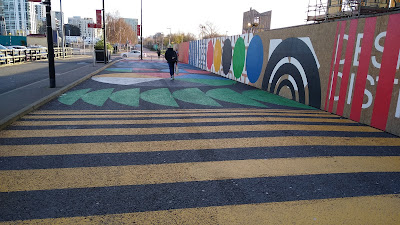 Old road repurposed as walking space at
the O2 in London

Traffic cones are ubiquitous elements of roadworks and they can be used to create all sorts of layouts. They are generally aimed at managing drivers and are traffic signs in their own right. They can be used to set out the edge of walking or cycling space, but probably best where it's separated from motor traffic. 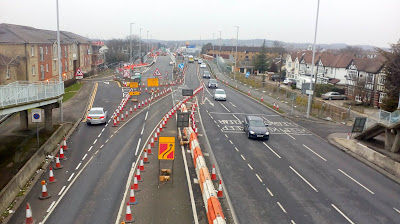 The big disadvantage of cones is they are relatively easy to move (willfully or being driven into) and so will require regular checking. A semi-permanent development of cones is the traffic cylinder also know as wands. These are fixed to the road surface and are less at risk from being moved than cones, although they won't physically stop a motor vehicle (although that's not generally the aim anyway, even with a kerbed cycle track). 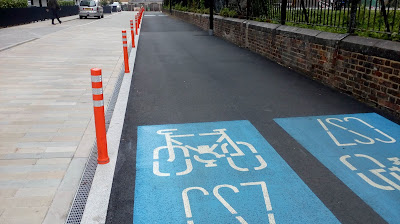 Wands used on CS7 in London.

Cones and wands have the advantage that people can walk between them to cross the road and so the next few products need to have gaps left if we are to facilitate crossing the road. In some cases, the materials I set out below could be useful at the start of a run of cones or wands to just add a little protection.

Water or sand filled barriers are another feature of roadworks. These are plastic barriers which come in small units which are hooked or bolted together and then filled with water or sand to give them mass. They do provide a degree of errant vehicle mitigation because being linked, their mass acts together. There are also concrete versions of this, but they are harder to move around. 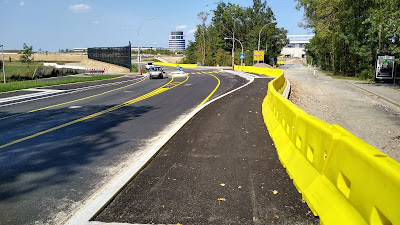 These water-filled barriers are providing a
temporary layout in Luxembourg City, in the
UK they would generally be red and white units.

Beyond the materials I have described so far, we move into semi-permanent territory. Products such as MASS barriers are used to protect roadworks sites and weak bridge parapets from vehicle incursion. Their profile and mass help redirect errant vehicles.

Varioguard barrier is often used for long term layouts or for permanent protection and together with MASS barriers, we are probably getting beyond what we are aiming for with interim layouts. 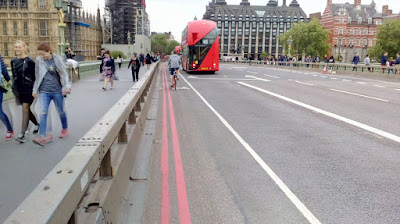 Of course, there are other things we can use such as planters, concrete blocks and armadillos/ orcas - anything we can place at regular intervals to reserve space for walking and cycling, but to exclude motor traffic. 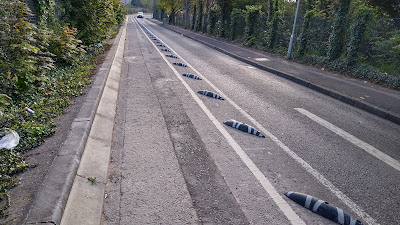 Armadillo lane separators used correctly in this
example where they are angled to deflect drivers from
this contraflow cycle track.

The examples so far are for linear space creation and is potentially costly if rolled out over long distances. A cones and paint solution may cost up to £10 per metre and a wands and paint version perhaps £20 per metre.

With water filled barriers and the like, they are generally available to hire, but after a few weeks there will be a cut-off point where it's cheaper to purchase, but many local authorities and their contractors don't have an endless supply of storage space.

Modal filtering will be a much cheaper way of providing low traffic space and creating networks of low traffic streets immediately gives space for physical distancing. The cheapest solution is to use road closed signs with cones and barriers, but they are too easy to shift and required constant checking.

A simple line of bollards is probably the cheapest decent solution and when used in odd numbers with 1,500mm air gaps, provides a decently accessible feature for cycles and mobility scooters; 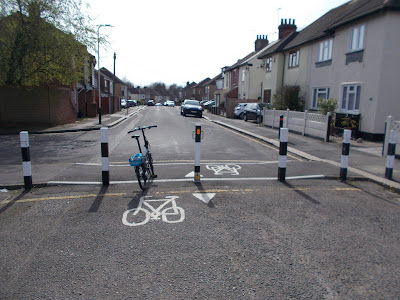 Timber Planters are a nice way to add interest to a street and with a bit of community help, they can be brightened up. 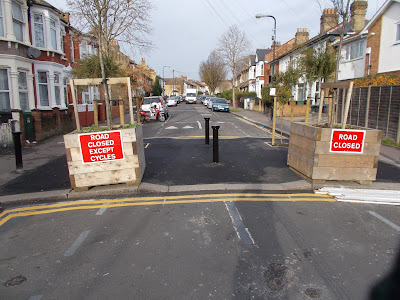 Timber planters used for filtering along with
bollards in an earlier modal filter in
Waltham Forest, London.

The beauty of timber planters is that they can be easily made from stock timber using a hand saw, cordless screw driver and screws. I have had a quick look on Travis Perkin's website (other suppliers are available) and found a 47mm by 225mm section timber, which is fairly simply used to make a planter. Just line it with some permeable membrane to allow water to drain out, some large gravel at the bottom and then planting medium;

This (upside down) planter is 1,247mm square
by just over 900mm high. If the three cross
pieces at the bottom are doubled up, then the
planter can be moved with a pallet lifting trolley.

Of course, there are heavier timber sections available, but I'm looking at trying to keep the costs low and thinking about the ease of cutting timber without power tools - something a road work crew can easily knock up on site. Group a few together in the street with some temporary seating and the place is transformed for very little money. 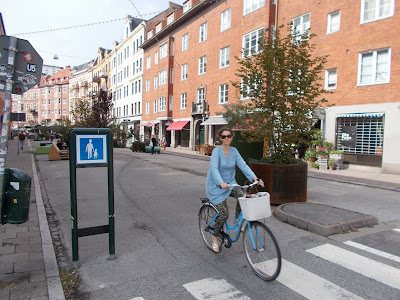 For something a little more utilitarian, concrete blocks are easily available such as the Legato series - the LG3 at 800mm cubed is a pretty good choice as a standard 7.5 tonne truck with a hiab can shift them about - again useful for term contractors (and explained here); 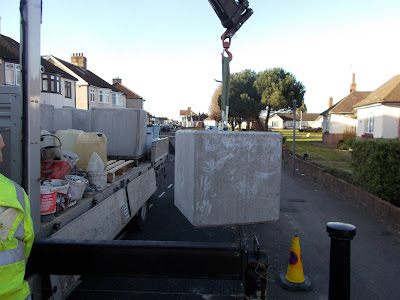 Risk
I'm not going to write much in this section because I have covered design risk and liability in detail here and here; plus risk assessment here. Designers really shouldn't worry about design liability if they write down what they are doing and why with risk assessments undertaken commensurate with the scale of the works and the local circumstances.

A decent statement to explain what is being done and why it's needed is a useful starting point together with a literature review (what guidance is out there). Then a discussion about the local context and the objectives of the scheme. Round off with the discussion of why particular decision designs have been taken.

In our current response, there's probably little point in going into dry local policy details, but frame the work as the Council's response to the Covid-19 crisis and refer to the Government's Statutory Guidance. As a rule of thumb for designs, make sure they are conspicuous to all highway users day and night. If you feel some garish colours, reflective stripes and lots of signs are warranted, then go ahead because this stuff doesn't have to be pretty. Also, please make sure that things are kept accessible because we are designing for everyone - get some help if you are unsure.

Also make sure what you do is reviewed by others - not to shift the blame in the event there is an issue (being sued for design work is so rare, it's hard to find cases), but to get a sense check on your approach. I think the main things which will happen will be around people tripping over stuff, may be clipping it as they pass on their cycles or driving into it because of confidence exceeding skill. As a designer, do what you reasonably can to mitigate the risks, but you can never eliminate them totally.

I heard a phrase from an army officer as I watched a webinar recently. He said "simply good enough" - that's where we are. If we keep some of this stuff (and I really hope we do), we can improve it later.
Posted by The Ranty Highwayman at Sunday, May 17, 2020