I've often said that infrastructure creates the culture and for much of the UK, this is a motoring culture. However, as many people who have been cycling throughout the Covid crisis will tell you, we also have a speeding culture.

It will therefore come as absolutely no surprise that the latest "vehicle speed compliance statistics" from the Department for Transport shows a disregard for speed limits. Of course, it isn't a matter of "vehicle compliance" it's a matter of "driver compliance" and why the DfT seeks to remove this agency in the headline is beyond me.
Of course, a non-compliance will be 1mph over any given speed limit and to some extent this should be borne in mind, but 1mph over is still speeding, but we have developed a culture that a little bit of speeding isn't a problem because it's not widely enforced. However, as can be seen on the interactive graph in this ProPublica article, the risk of being killed really does go up with every mile per hour of speed increase.
So what are the headlines? Well they aren't great as shown in the first figure;

Again, we've the lack of agency, but certainly within the "professional" vehicle classes, there are plenty of drivers who should know better and the only reason that the drivers are articulated lorries appear saintly on motorways is that they have speed limiters (see the bottom of p11 here for more information and remember there are different limits for different classes on motorways and within National speed limits).
The data for car and van drivers is interesting with around half of each speeding on motorways and 30mph roads. There is no data for van drivers on National speed limit single carriageways, but I would expect the level of non-compliance to be similar. The reason I am so confident is in the nature of what these roads look like (as a result of their design or evolution). Even single carriageway roads with a National speed limit which are relatively wide and straight have geometric limitations on the maximum speed it feels to safe to drive at, whereas many motorways and 30mph roads are not uncomfortable to speed on; 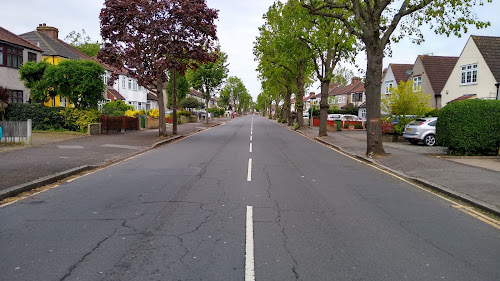 The design of this 30mph street doesn't send a message to
drivers that they should drive below 30mph.
The data suggests that in terms of drivers exceeding the speed limit by 10mph on motorways is 12% on motorways, 6% on 30mph roads and 1% on 60mph roads. Of course, in terms of the percentage above the speed limit this equates to 14%, 33% and 17% above the speed limit respectively which is a better way of presenting the same thing.
In terms of compliance generally, it is best single carriageways with the National speed limit and worst on 30mph roads. The level of compliance has been the same since 2011, although this year the DfT has used fewer sites and the document warns about comparing and the data is based on "free flow" - the speeds drivers can travel at when they are free to do so.
For 20mph limits, the picture is far worse, although there is a caution that free flow may be less clear on these roads because of the presence of traffic calming and that free flow sites are more likely to be through routes rather than residential streets (which will be under represented in the data). 86% of car drivers exceeded the speed limit with 20% being 10mph over the speed limit (or 50% over the speed limit). Compliance was better with lorry and bus drivers.
Again, the type of roads chosen will look no different from the 30mph roads I have mentioned above. As a generalisation (of road layout and driver behaviour), this is suggesting that drivers are taking cues from the street layout when selected their speed rather than what the speed limit is posted as. 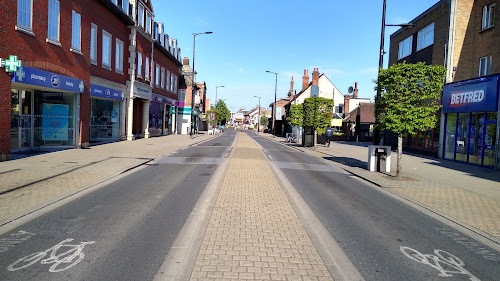 This is Hornchurch High Street. It's a busy A-road and the
comfort for cycling is questionable, but the layout of the street
tells drivers that this is a place to drive slowly and the 20mph
speed limit has a decent level of compliance.
In terms of enforcement there were 2.11 million speeding offences in 2018 in England & Wales. The RAC Foundation suggests there are 15.3 million drivers in England and Wales to put that into context. There was an 88% conviction ratio and 28% of motoring offences were for speeding. In terms of collisions (DfT still calls them accidents), 5.1% included exceeding the speed limit as a contributory factor and for fatal/ serious collisions this rises to 6.6%. Of course inappropriate speed can still be a contributory factor within the speed limit.
Although the data is broad, I think it is reasonable for us to conclude a few things from it;
Personally, I would be very happy if we could free up police resources from dealing with speeding drivers, but this requires changes to our streets, especially the urban 20mph and 30mph I have discussed above - those which are probably going to be through routes. Of course, vehicle technology with speed limiters will help, but this is going to take years and of course, even if a road has a 20mph speed limit which is universally obeyed, it may well be very hard to cross if it's busy.
You may think it tenuous, but I think rolling out low traffic neighbourhoods is a pretty cost-effective treatment to deal with side streets in comparison with traffic calming which leaves more resources to tackle main roads where we can narrow traffic lanes to slow drivers down, make space for other modes and to change the nature of how a street feels. In turn, the police can spend more time dealing with those who exhibit the very worst driving behaviours.
Posted by The Ranty Highwayman at Wednesday, September 09, 2020