Push buttons at signalised crossings is a subject which pops up all the time and when it comes to accommodating cycle traffic, we find yet again lumping it with people walking disadvantages both modes.

One of the recent US-imports to the UK has been the increasing use of the term "beg-button"; in other words, people wishing to cross the road have to beg people driving to let them cross by pushing the button. I sympathise with the premise, but what is worse, is not being able to reach the button in the first place. I posted a photograph of my cargotrike next to the push button of a toucan crossing on Twitter yesterday with the complaint that I simply couldn't reach it. 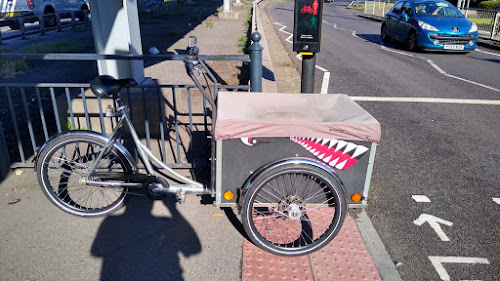 Sadly, someone suggested that I could easily dismount and while that is true, it demonstrates some of the attitudes which prevail in the UK because people simply do not realise that there are people who cannot dismount - this is a clear example that the environment disables people. I went through the same crossing today on a completely different cycle; 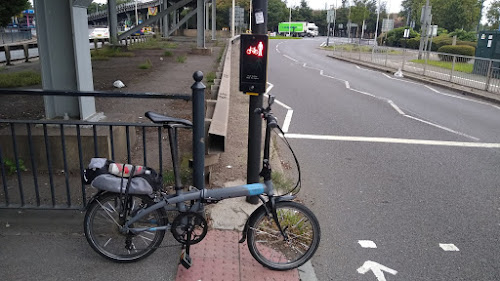 As you can see, the saddle is much closer to the push button, but it is still a stretch - I am not welcomed by this layout at all. It's a specific layout issue because in using this crossing (a two-stage non-staggered arrangement) I am moving towards the push button rather than arriving next to it as I would be on the other side of the road; 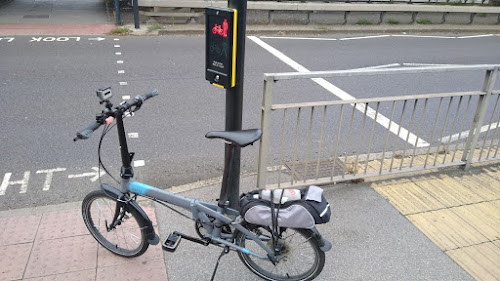 As you can see above, I am right next to the push button which is easy to press, although on the tricycle, I risk being tipped by the dropped kerb, so it isn't ideal. One issue which probably doesn't appear immediately obvious is that my position here does two things. Being a nearside crossing, my body would block the view of the crossing display to anyone else wishing to cross. This can be dealt with by the use of a second high level display, although if I am on my cycle, I may well block this too; 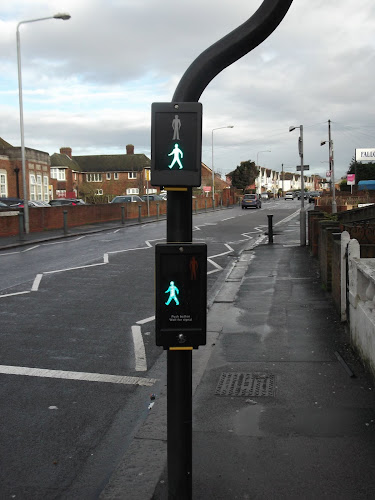 More importantly, I am blocking access to the tactile cone sitting under the push button box which rotates when the green man is showing; a feature which many visually impaired people rely on; 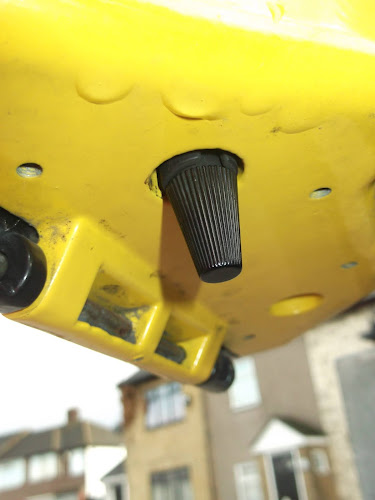 Of course, this problem has been created by lumping walking and cycling together. If the modes are properly catered for with separate crossing provision, then the use of push buttons means we can more sensibly place them in relation to the seating position of someone cycling; 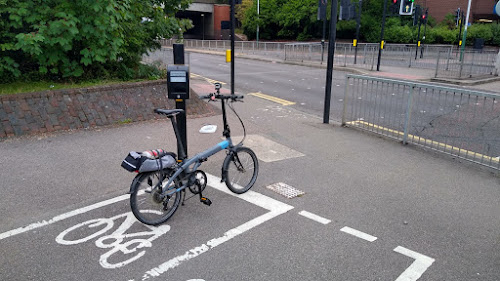 The photograph above shows a layout which has a parallel cycle and pedestrian crossing (with a decades-old layout). The push button for the cycle crossing used to be on the right hand traffic signal pole (next to the guardrail) which meant that anyone on a cycle wanting to cross had the whole issue of not being able to reach the button and blocking the footway. By setting the push button further back with a stop line, these two problems are dealt with. The crossing really needs a complete redesign for a number of reasons, but this relatively modest change makes things work a little better.
Of course, the ultimate cycle-friendly layout is one where there is no push button. The photograph below shows a parallel signalised crossing where people cycling are detected by a sensor on top of the traffic signal pole. The metal frame next to the cycle track is a foot/ hand rest to make it a little more comfortable for people waiting to cross (product here). 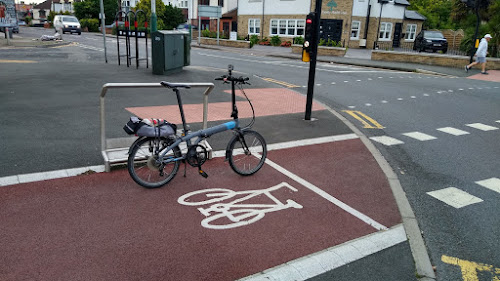 The choice of push button versus detection will be down to site layout. If a cycle track runs towards the crossing point, the detection should be quite simple. If the layout is tight with other modes then a push button avoids other traffic being detected by mistake (depending on the type of detection) - this is an area better known to signal engineers! Of course, there is the whole question of whether we should be using push buttons routinely, but assuming they are with us for now, let's at least improve the layouts.
Posted by The Ranty Highwayman at Sunday, September 06, 2020