So here's a thing. In an idle moment, I might have a mooch around with Google Streetview and something interesting pops up. In Hilversum, The Netherlands, I stumbled upon a protected intersection without traffic signals.

The location is here, to the south of the city in a suburban shopping street. I've not visited the area and so I can only bring you an armchair visit, but the junction and the approach streets are interesting to look around.
The junction is a 4-arm crossroads of Gijsbrecht van Amstelstraat (a two-way street) and Neuweg (which is one-way). There is a mixture of cycle lanes and cycle tracks on the approaches to the junction, but at the junction itself, everything becomes cycle tracks; 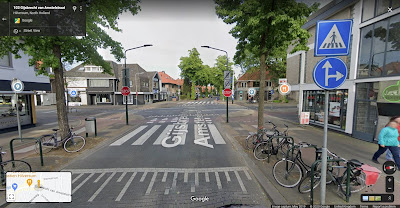 The image above is Gijsbrecht van Amstelstraat looking east through the junction. The street cross section has a footway on each side, a one-way cycle track, a buffer area which has cycle parking and the carriageway itself. Just behind the viewing position, the buffer becomes a car parking area with a minimal buffer between the parking bays and the cycle track.
To the east of the junction, Gijsbrecht van Amstelstraat, the cycle tracks quickly become cycle lanes and the street becomes residential. For Neuweg, the cross section is similar, although there is a single one-way traffic lane. I'm not entirely sure how this all works at a network level, but Gijsbrecht van Amstelstraat looks like it's part of a general city ring road, but it's more like a circular distributor route made of city streets and Neuweg is a radial distributor road coming out from the city to connect with a National road which is performing a regional through route function.
Neuweg is interesting in its own right because it is one-way, but this very much looks like it was a way of providing space for a cycle track in each direction (as well as lots of on-street parking), although it becomes cycle lanes further. For drivers, they will have to enter the city via a different route. If you have a look around, there's a general principle of providing two-way cycling everywhere and if there's space, 2-way motoring; if not, one-ways for motors. In other words, there's a cycling network with the motoring network arranged around it. Neuwg is shown below. 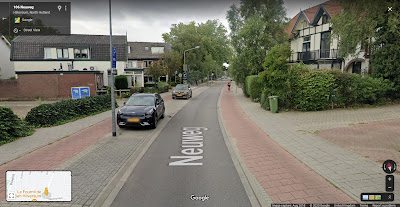 Everywhere else, there are just streets where through traffic is either filtered or sent on long one-way loops to make it pointless for rat-running - these are access streets for the people who live there, their visitors and their deliveries - of course cycling is permitted everywhere and in both directions such as Rozenstraat which is one way for motors, two-way for cycling and a home zone street. 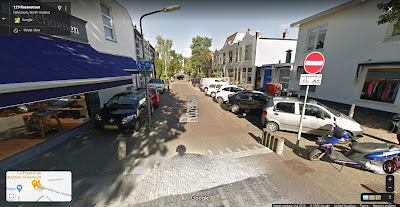 All very interesting and important context, but back to the junction. It's a pretty standard approach to have walking and cycling traffic moving orbitally around junctions (in many countries) and this junction is no exception. Cycling orbits next to the carriageway with walking next.
Walking and cycling have priority in each direction along the line of travel on Gijsbrecht van Amstelstraat by way of parallel zebra crossings (on speed tables and people walking have priority over the cycle track here) whereas motor traffic has priority along Neuweg over both walking and cycling and over motor traffic Gijsbrecht van Amstelstraat (where drivers are required to stop rather than give way).
Neuweg has a 50km/h speed limit with Gijsbrecht van Amstelstraat having a 30km/h speed limit - the arrangement of speed limits and priority for motor traffic here suggests to me that Neuweg does perform a somewhat arterial function. From a walking and cycling point of view, Neuweg performs the same function.
For people cycling through the junction, notwithstanding the need to give way to motor traffic on Neuweg, the junction is fully protected which is rather amazing given the compact nature of the junction. The drawing of the junction below is slightly stylized - I've left off the speed tables and not drawn the transitions to and from the cycle tracks beyond the junction. Neuweg runs up and down with the one-way from the bottom towards the top of the drawing. 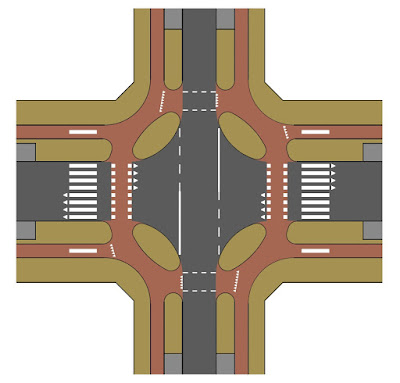 If you look closely, you'll see the stop lines for drivers leaving Gijsbrecht van Amstelstraat and the triangular give way markings for drivers approaching the parallel zebra crossings. You'll also notice smaller give way markings on the cycle tracks approaching the junction giving cycle traffic on Neuweg priority over cyclists joining to head north or south.
As best as I can work out from Google Maps is the cycle tracks are about 1.5m wide, the footways perhaps around 1.8m (some narrower and some wider). The car parking bays are about 2m wide (light gray); with the carriageway of Neuweg about 3.7m and the carriageway of Gijsbrecht van Amstelstraat maybe 6.5m.
The cycle crossings on Gijsbrecht van Amstelstraat are set back just over 5m from Neuweg which is important to ensure that drivers can see what is happening and stop to let cycle and pedestrian traffic cross as well as not blocking the other road or crossing (depending on direction of travel).
As I said earlier, I don't know the area, but the methodical approach to how the junction operates leads me to think that the safety record is probably pretty good. It also reminds us that with Neweg being subject to a 50km/h speed limit, cycle tracks are required under the Dutch system of sustainable safety and thus this extends to the junction treatment. Could this work in the UK? 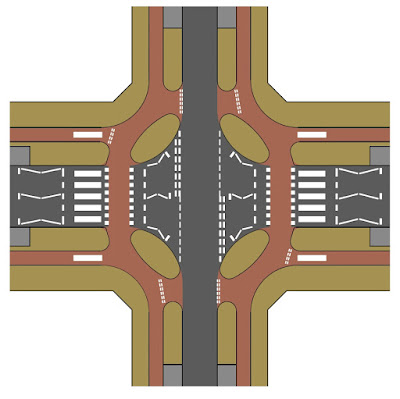 In short, yes. The drawing above is the same layout, mirrored to drive / cycle on the left. It's fussier than the Dutch layout because of UK road markings and the need for zig-zags at the parallel zebra crossings - this requires the "elephant feet" square cycle markings to be 400mm from the zebra stripes. It's a daft dimension which really makes it tricky to make things work. Really, this should have been specified as between 400mm and maybe 1,200mm to give the designer flexibility. Anyway, the arrangement works and would be UK road-legal.
Of course, the key issue with this layout will be that of traffic volumes. Notwithstanding the speed limit issue I talk about above, I suspect that the junction is reasonably busy, but of course not enough to need signals. It's an old layout because the cycle tracks are made from concrete slabs rather than asphalt and giving Neuweg priority over foot and cycle traffic in an urban area like this feels a little old fashioned. This post may be little more than an academic exercise, but the junction was interesting enough to take a detailed look.
Posted by The Ranty Highwayman at Sunday, September 27, 2020