The Politics of Winter Service

I wasn't going to write about winter service this week because I had covered it in two posts during the winter of 2017/18, the latter being a little more of a deep dive.

But, I've changed my mind and it's always useful to think about events and what we can glean from them. In my corner of London we had some snow earlier this week. Under normal circumstances it would have played havoc with road and rail, but the lower demands from people travelling meant that there was resilience in the system. That's not to say that other parts of the UK didn't have problems, but in London we generally don't need to physically plough snow out of the way - our problems tend to be more about icy conditions. 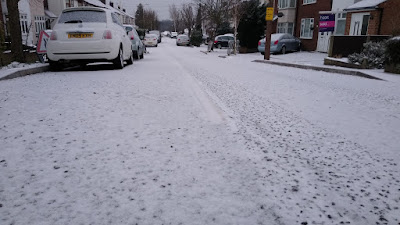 Because I was working from home and I had no errands to run, I didn't go cycling until Friday because based on past experience, you can cycle when the snow starts, but the lack of winter service on shared paths and cycle tracks means that after a few days you've ice to contend with. 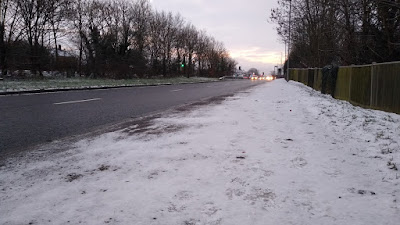 As you can see in the photos above, side streets are lower down the winter service pecking order and while main roads remain fully useable, it is only ever the carriageways which get treated. The shared path above still has some nasty patches of ice after several days of people walking across the snow and it getting compacted and refrozen into ice.
Why do we have it run like this? There is obviously a need to keep the carriageways of main roads clear for public transport, emergency response and freight, but this is also in part due the old network and planning hierarchy which places the movement of motor traffic at the top of the list.
As well as necessary services, the lure of clear main roads also means that people will be trying to drive from their side street to reach these main roads. In quite a lot of cases, people will not be used to driving in icy conditions and so we get to see social media posts full of drivers sliding around - some dangerously risking themselves and others.
What options do people have though? In many ways cars insulate us. In freezing temperatures, it must be tempting for some people to use a car rather than walk or cycle because generally it feels safer to do so that having to cope with the ice. This brings me on to the politics of winter service. Who writes the service plans? Who decides on the priorities?
Thinking of a typical UK highway authority, I would lay odds that most of those involved in planning and operating winter service plans are men and probably men who drive. They see the problem from one of a highway network which has been developed by men over decades and even where there are demographic changes in the authority areas and within the authorities themselves, the network legacy has baked this in.
In high cycling countries and cities, winter service is a little different. Of course, highway network development will have followed a similar evolution as the UK to a point, but once cycling is prioritised, then the demographics of street users dramatically shifts and all of a sudden, prioritising people cycling in winter maintenance plans leads to different outcomes which enable a much more diverse and gender-balanced cohort of people travelling. I'll come back to this shortly. 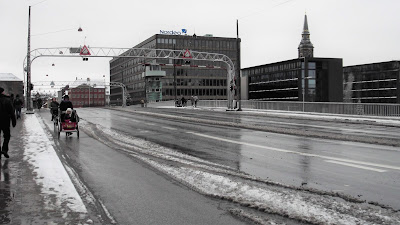 Take Copenhagen (above). The city is famous for getting out and clearing its cycle tracks as soon as the snow falls. The city has of coursed moved from the chicken and egg debate of deciding to provide cycling infrastructure and with high levels of winter use, the city has also realised that it needs to keep them clear to keep people cycling. This also means equipment is available at the right scale for providing winter service for cycling infrastructure. 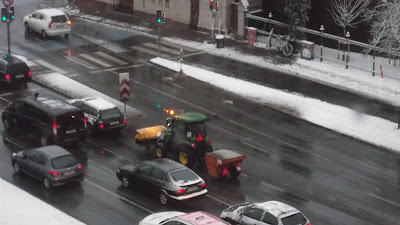 The photograph above is a small tractor with a brush for sweeping snow from the cycle tracks in Copenhagen. In the UK, we are gradually seeing investment in such kit in the places where we are building for cycling. Sometimes it's dedicated and sometimes it's added to existing street cleansing machines.
But even in the high cycling places, people walking come a distant third. Carriageways and cycle tracks are generally easy to to keep clear of snow and ice, but footways often have clutter, they are behind lines of parked vehicles, cars parked on footways and because of the way we construct footways, they are often uneven leading to water holding and freezing. In many winter services plans, footways on main roads do get attention, but if your side street footway is sheet ice, then it's little help.
The progressive end of winter service planning lies with the gender balanced approach. In 2015, the Swedish city of Stockholm reviewed its traditional winter maintenance approach and discovered that it disadvantaged women who tended to walk and favoured men who tended to drive - based on clearing carriageways first. They also that three times as many people where injured walking in icy conditions compared with driving. Here's more from Streetsblog USA, including a video.
Of course, the implications are more far-reaching than men vs women when we consider who travels and by which mode; and more importantly, the mix we want to see in the future. Could there be a wider argument that ensuring the footways within a kilometre of shops, schools and community facilities should be treated first to ensure that those without access to a car can satisfy their basic daily needs during cold weather?
This goes back to the politics. Who decides on how streets are developed and managed? Who leads the operational process on how streets are designed and managed? Who is valued as a result? Have a look at your local highway authority's winter service plan and I think you'll be able to answer those three questions with a high degree of confidence.
Posted by The Ranty Highwayman at Saturday, February 13, 2021