We get the people we design for and when it comes to people driving, the design of the road ahead will be a big influence in how fast they will choose to drive, regardless (to some extent) of the posted speed limit.

Let's start at the "fast end" with a quick look at the Design Manual for Roads & Bridges (DMRB). For those who don't know, the DMRB is a design standard for trunk road and motorway schemes for Highways England and devolved national administration projects. Many local authorities use it for trunk road-style schemes, but the standard isn't written for them, so it's merely guidance (which explains the cherry-picking going on in lots of cases).
DMRB is concerned with the safe maximisation of traffic speed and capacity. Trunk roads and motorways are there to carry long distance traffic and so designs which don't accord with those principles will compromise safety and capacity plus speed to some extent. For example, there are forward visibility requirements for curves so that it is safe to drive through them at the National speed limit. Compromises will be around width of the alignment, geometric matters (curves and hills) and other more detailed considerations. 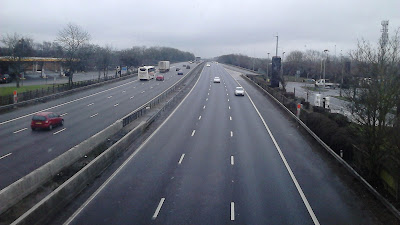 Motorways are design for high speeds and capacities.
If there are compromises to the point where those speeds cannot be safely maintained, then that's often where speed limits come into force, although on a network where people are used to driving at speed, asking them to change that behaviour is challenging and so average speed cameras are becoming more common.
In the absence of too many compromises, motorways and trunk roads are designed for 120km/h speeds (75mph) for dual carriageways and 100km/h (62mph) for single carriageways. There are always people saying that car technology improvements since the original design parameters were developed means that we should be raising the speed limit. That's true to a certain extent, but things such as physics and human behaviour don't change.
The design speed takes into account that not all vehicles and not all people are in perfect condition and so while a Formula 1 driver on a perfectly surfaced motorway without other traffic will be able to go far faster than 120km/h, the same driver in a fully laden works van on a surface due for renewal is a different matter. There is a balance between risk and safety being employed.
A current example of how the speed limit and the compromises pan out is the A465 Heads of the Valleys scheme in South Wales which has seen the section dualled. There will be a 50mph speed limit in place which is predictably controversial, especially as this is the same as the old one. If you look at a map of the scheme between Brynmawr and Gilwern, you'll see that the horizontal alignment is full of curves, the vertical alignment differs between the two carriageways and there are constraints at slip roads. It's not another front in the war on the motorist, it's the designers having to work within the geologically and geographically challenging Brecon Beacons!
As you move into more urban areas, the motorways may start to fizzle out for the the most part, but there are trunk roads. Many are a legacy of schemes built decades ago. The standards back then will have been a little different, but not overly so and as they wind through the communities cleared out the of the way, you'll often see tighter curves and short slip roads. Maybe speed limits weren't imposed originally, but years of collisions have made them a necessity. 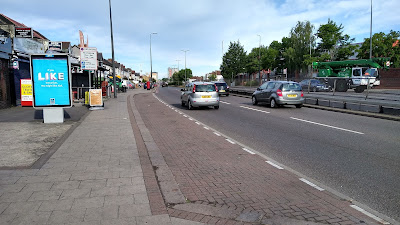 A12 Ilford. This section has frontage activity, crossings
and side streets and so a 40mph speed limit.
If we then look at speed from the other end of the scale, on residential streets, we should be seeing very constrained layouts which physically make it hard to speed. This is a pretty universal concept, but in the UK, it can be found in Manual for Streets. 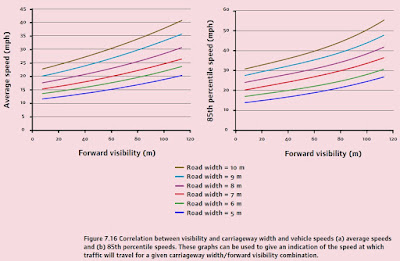 Figure 7.16 (above) shows the relationship between road width and forward visibility with the 85th percentile speed (85% of drivers will "naturally" drive at or below this). It's also something that the Dutch have long since been skilled at in terms of keeping driver speeds low as well as making residential streets access only (Low Traffic Neighbourhoods in the UK zeitgeist). 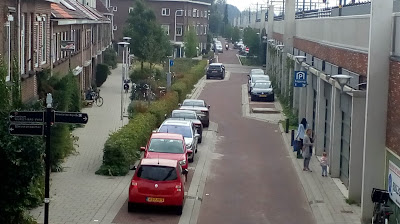 A low speed street, Utrecht, The Netherlands.
The biggest challenge for us is those streets which maybe sit between the two extremes, or at the very least are wide and easy to drive at speed, despite the presence of frontages and street activity. It reminds me of this short video - "Conversation With An Engineer" where a "street improvement" isn't actually aimed at the people who live there;
This video has strong parallel to many UK "improvements" where we've made it easier to drive through towns with gyratories, carriageway widening and miles of guardrail because an urban road is stuck with a legacy function for moving long distance motor traffic. These streets become harder to cross, nowhere to cycle and motordom ultimately exerts its dominance. People are then surprised that there is a speed problem, but when you give urban streets a hint of trunk road, that's what you're going to get. 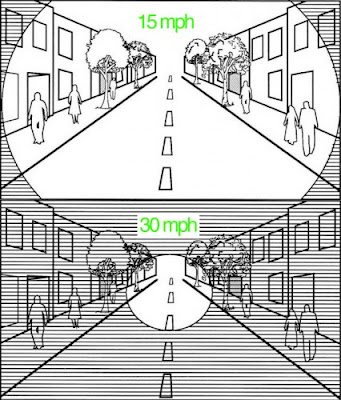 Crucially, as driver speed increases, their ability to perceive what is going on reduces and their field of view decreases as shown in the wonderful diagram above from the Streets Minnesota campaign. On a motorway or trunk road without other things going on, higher speeds are fine, in urban areas they are a killing ground. Above 20mph and people outside of cars rapidly and non-linearly suffer death or serious injury from collisions. Streets engineered for high traffic flow attract speeding and speeding drivers don't see enough of what's going on.
There are lessons in design here. First, is how we deal with transitions from motorways and trunk roads to urban situations (and I'd include villages here) with treatments that reinforce the change in environment. People don't simply change their behaviour after driving in a fast environment, it takes a little time. Second is if we design in layouts and alignments which entice speeding in inappropriate places, it should not be a surprise to see speeding and severe outcomes from collisions. Third is that simply placing a speed limit sign isn't going to solve the issue. While there will be some modification of behaviour, design will always be more powerful in influencing behaviour.
Posted by The Ranty Highwayman at Sunday, July 18, 2021