One of the best things about spending time mooching about places is the little surprises that one stumbles upon and in the case of Poole, there was an unexpected gem down by the quayside.

We visited Poole just to have a couple of hours wandering around and by happenstance, the route the sat-nav was suggesting to take us to the local multi-storey car park was closed to motor traffic. Rather than taking to social media to claim the world was about to end, we found an alternative parking place nearby and stretched our legs. 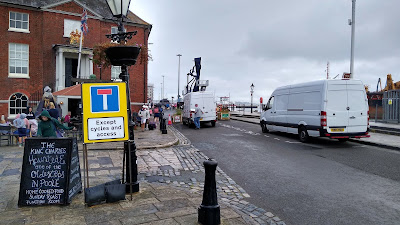 Above is the view east along The Quay at the junction with Thames Street with a modal filter a bit further up. You can see a loading bay on the right hand side of the street helping to serve the businesses beyond, although not everyone was playing by the rules. 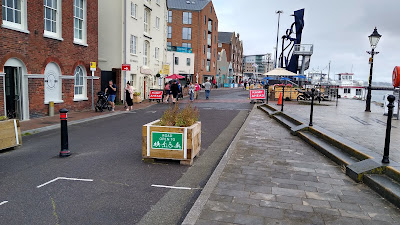 Above is a closer view of the filter which uses the now familiar planters and and bollard arrangement together with the "road open to people" sign. So far, so wonderful. 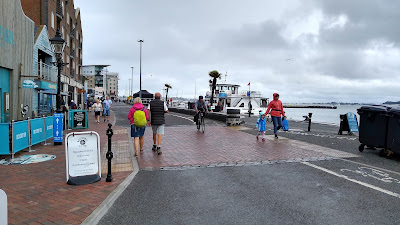 The filtering of The Quay has immediately created space for restaurants to add outside seating space with a wide area for walking and cycling (above) which yet again shows that in the right place, the two modes can easily coexist when you take motor traffic out of the equation. 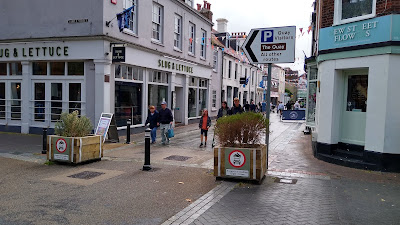 Just north of The Quay is the High Street which is also filtered at Castle Street where I noticed a bit more about the scheme. The filter operates 24/7, but the street is accessible for loading (above) between 10pm and 10am. Personally I'd like to see loading end a little earlier in the morning, but it does mean that the street is available for the peak times that people are shopping and visiting the restaurants and cafes. What is particularly good is the positive sign telling drivers the way they should be going in addition to the restriction. 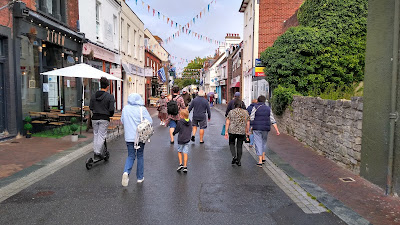 As you can see in the photograph above, the full width of the street is available for other uses, again with more space for eating and plenty of space for walking (and access by cycle if needed). One thing you'll see is the footway widths are inconsistent and often narrow, so having the carriageway available is far more accessible for all (below). 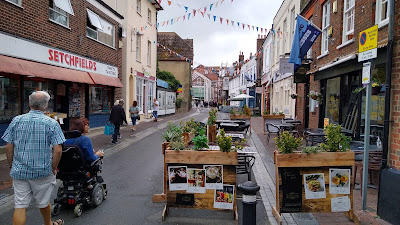 To complement the scheme, the area is a Restricted Parking Zone (RPZ) which means that only traffic signs are used to provide parking and loading restriction information. Some of the signs are attached to buildings which is an excellent way to reduce the clutter of sign posts and shows thought by the designer. The yellow part of the sign is the replacement for the double yellow lines and the white part is the loading ban. 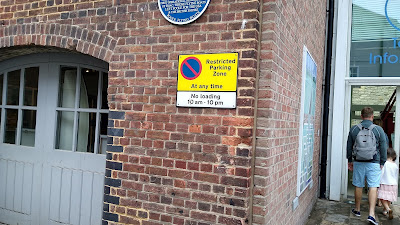 This approach is a really good example of how we can balance the needs of people wanting to shop and eat in a narrow street with the needs of businesses actually having to service the same premises. When we prioritise a place for people rather than through traffic, we all of a sudden do have space for people and servicing. 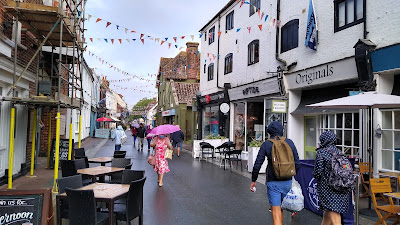 Sadly, this scheme is slightly too good to be true. With thanks to Engineer Like a Girl, it turns out that it was originally installed in the summer of 2020 as an Emergency Active Travel Fund (EATF) scheme which was made permanent in May this year, but with the decision taken for it to be seasonal between 1st April to 31st October. Below is the permanent scheme arrangements reproduced from the council's website. 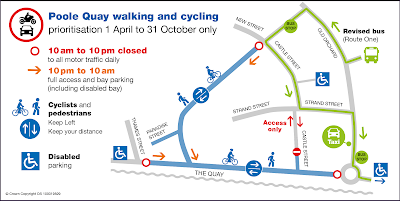 As you might expect, there were plenty of comments in response to the scheme, but I assume that majority of businesses asking for the scheme to be seasonal swayed the decision (you guessed it - car parking, despite the 500+ space multi-storey car park next door). Still, the summer season scheme is clearly a positive change and I hope the businesses change their views over time. It's still a great little scheme which we should be doing far more of in the UK.
Posted by The Ranty Highwayman at Saturday, September 04, 2021