As an engineer, I need to be able to communicate ideas and concepts to other people and one of the most powerful tools I have at my disposal is drawing.

There are obviously many mediums through which we can draw, but I tend to use CAD (computer aided design) or hand drawn sketches. For this blog, Microsoft Paint was originally my go to package for quick little diagrams, but once you had committed yourself, editing became tricky. I use the industry-standard AutoCAD for work, but it is incredibly expensive and certainly out of reach for the enthusiast and indeed small business. Luckily, I found NanoCAD a few years back which has a free version that I tend to use for most of my drawings for this blog as well as it being my tool of choice for freelance work I undertake as City Infinity.

Visualisation of a walking & cycling underpass.
While AutoCAD and the professional versions of NanoCAD (plus lots of other competitors) are very powerful and come with all sorts of clever modules, for sketches of junctions and layouts something basic is fine. The professional software is so sophisticated that from a highway engineering point of view, 3D models can be built of schemes and lots of changes made where the impacts and clashes can be tested - this is the world of Building Information Modelling (BIM) which is pretty much as much a mystery to me as basic CAD was for the designers who used to ink acetate sheets.
What is very useful about CAD is the electronic models we create are based on a coordinate system and so are very much recreate a little piece of the world in our computers which can be manipulated, measures and experimented with way before we thing about sticking a shovel in the ground.
My other medium is a pencil and paper with some ink and colour following on. At school, I studied craft design and technology (CDT) spread over two GCSEs covering Design & Communication and Design & Realisation. The first was very much about getting ideas across and the second were transforming those ideas into something tangible. Maybe the two themes have stuck with me. Drawing and sketching had been in my background for years, but with CAD, it was often a skill that wasn't topped up.
More recently, I have been in a position where I am (amongst other things) responsible for generating options and ideas to solve problems rather than having to do all of the clever (and sometimes laborious) task of converting thoughts into proper drawings that can be used to build things. Having said that, because I have been immersed in the practicalities of building things for years, I think I am reasonably accurate (and a scale rule helps in this regard).
I'm going to spend the rest of this post showing you a few sketches and describing what is going on and how the solutions would work. I have removed any local references, but if you realise where these are, I won't be responding to any questions on location! Sketching is a good way of getting ideas across without having to spend hours drawing it up accurately, although that assumes the sketcher has an idea that things will fit! 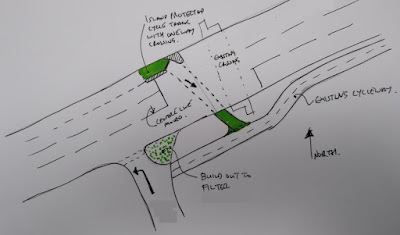 The problem being solved here was how to collect and connect eastbound cycle traffic to an existing two-way cycle track on the southern side of a street where the two-way cycle track also met a side street. Westbound cycle traffic from the existing cycle track met the side street and turned left from that.
The idea here was to pick up eastbound cycle traffic with a one-way parallel signalised crossing which would run with an existing signalised pedestrian crossing and so give access to the existing 2-way cycle track. To reduce conflicts at the side road, I thought that making it a left out would help. In this situation, we'd often see cycle traffic being pushed onto a section of shared-use path to access a toucan crossing, but doing it this way means that we can use cycle detection for the parallel crossing and if we're careful, the angled crossing means we should be able to accommodate non-standard or adapted cycles. 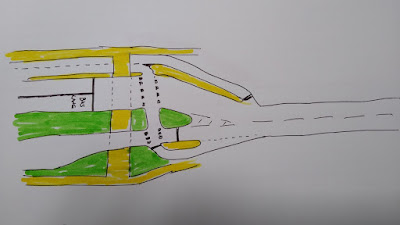 Swapping between with-flow and two-way cycling is an issue that is always coming and and so making the swap within signalised junctions or at signalised crossings is a useful way of making the transition in a relatively safe way and as I mention above, we can use detection. The sketch above is pretty wild because it's where a dual carriageway becomes a single carriageway. Not only that, the single carriageway goes over a bridge which hasn't space for any protected infrastructure (pedestrians have a parallel footbridge on the south side).
The problem here was how to end a potential two-way cycle track at the bridge while giving people some sort of protection while crossing, because the prospect of a bridge rebuild was a very remote proposition. The two-way to one-way was dealt with using a parallel crossing as this would give people walking a route to the footbridge too. On the north side, eastbound cycle traffic gets an early start to get people ahead of traffic and hopefully into somewhere safer on the other side (a cycle gate). Eastbound cycle traffic would have a cycle gate to cross the bridge and then a jug-handle arrangement to line them up with the crossing. A complex bit of head-scratching when you really want a new bridge! 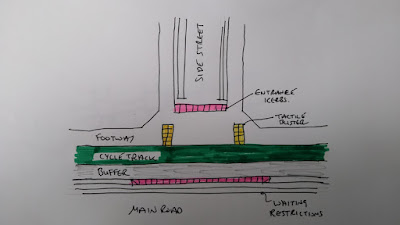 Above is a simpler sketch. This was used to explain to the team how we could work up a standard detail for a continuous junction treatment using entrance kerbs and blister paving at the threshold of where visually impaired people might experience traffic crossing. The team involved have now proposed an increasingly large number of this for many clients! 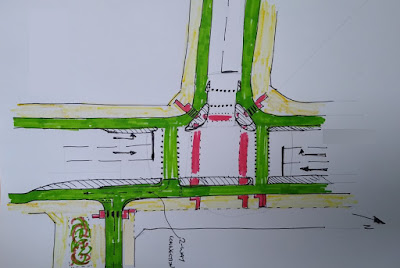 Above is an interesting one. The site is quite a busy signalised T-junction with a small side road off to the southeast (at the bottom of the sketch). There are cycle tracks in the area, but provision at the junction is n't that great. The strategy here was to simplify things (which is always a good thing to do where possible) by making the end of the little side street for cycle traffic only.
The main T-junction gets a half-Cyclops junction on the western side (top of screen), but in order to maximise connectivity and to accommodate how people would behave at the side street, the southern cycle crossing point (to the left on the image) is actually two-way. In reality, we tried to develop this further, but some of the swept paths for larger vehicles became very challenging and so we'd probably have to reduce traffic lanes on the main road on which the jury remains out. 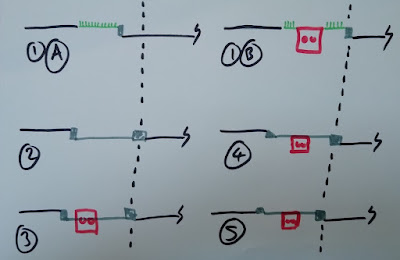 Above is a sketch I used to explain the implications of different ways of retrofitting cycle tracks in cross section. 1A is an existing situation, 1B is the same, but with a utility pit. 2 shows a carriageway level cycle track with 3 showing the problem that utility pits create. 4 in a stepped cycle track where we might be able to lower the covers to a utility pit and 5 is a footway level cycle track with a demarcation block where we can't adjust the covers to a utility pit. I was trying to explain that even if we tried to go with one strategy, we might need to adapt to local conditions.
In the UK, we seem very reluctant to go for complete street rebuilds because this puts the overall cost up and therefore reduces the benefit to cost ratio which, unfortunately, weighs heavily with funders. Retrofitting, therefore becomes our default position. 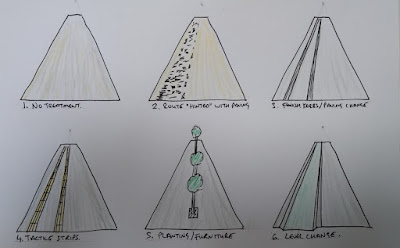 Above is a series of options for picking out cycling space within a much larger pedestrianised area. Top left is basically do nothing and not worry about it too much and bottom right is push a stepped cycle track through the space. The others are somewhere between the two. There is no universally right or wrong answer and solutions will vary with place. This sketch was there to be provocative to get a discussion between engineers and landscape architects going. 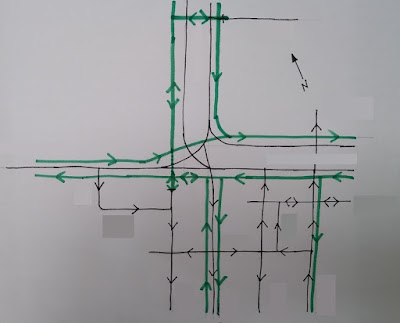 The sketch about is almost meaningless without street names, but it was essentially an exercise in trying to unravel driving and cycling networks. The black lines are driving movements and the green are for cycles. Where the lines are close, this means cycle tracks. You can also see a couple of streets being filtered for cycle access or streets left which would be quiet enough for two-way cycling. Having a look at the network and developing a network design strategy is something we don't do enough, but trying to simplify things pays dividends when we move to junction design strategies. 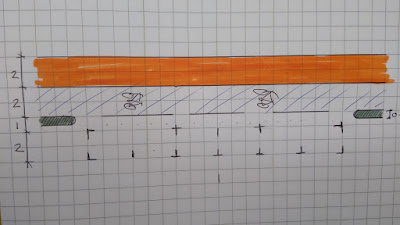 Above is a pretty simple sketch showing a footway (orange), a carriagway-level cycle track protected by 0.5m bolt down kerb units and car parking spaces floated out (complete with me messing up the bay markings). I used this sketch to show how a fairly simple retrofit could be set out. 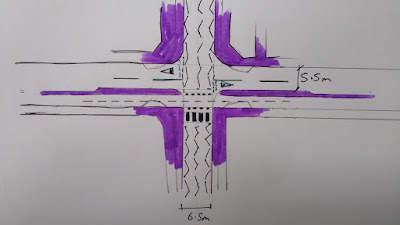 Finally for this week's post, above is a sketch of a cycle track running through a cross roads. The original layout prioritised east-west traffic, despite the north-south movement being busier and so as a result, there's a history of collisions. A scheme to add a two-way cycle track through the junction served to complicate things. I would have preferred to have made the two side roads one-way for general traffic away from the junction to reduce the complexity, but narrowing them to provide buffer space from the cycle track should slow things down.
The general traffic priorities are switched because the side roads are quieter, but we wanted to prioritise cycling so I added a parallel crossing because in the local context, it is probably more appropriate than adding signals, plus crossing design guidance is more flexible with zebra crossings being near side streets than signals (although I have taken some liberties).
So there you go. I have rediscovered sketching and I'm increasingly enjoying getting by pencil, pens and paper out to play around with some ideas and to generate discussion. It's certainly something I'd encourage designers to try to do a little more, because even though it might not be as pretty as a CAD plan, I think there is something more human about it which helps to get ideas across.
I shall leave you this week with the revelation that this, my 473rd post also brings me neatly to my 9th anniversary of writing this blog which I couldn't comprehend would happen as I pressed publish back this time in 2012!
Posted by The Ranty Highwayman at Saturday, November 27, 2021