Walking is both ubiquitous and hidden - a mode that most people use, even it's just a little bit and we've walking networks everywhere (at least in urban areas), but at the same time it's forgotten at the margins.

How can we raise the mode's profile in an increasingly crowded public discourse? Well I think that using some of the audit tools available to us is a very good place to start because unless we can measure something, it's hard to articulate how something could or should be improved. 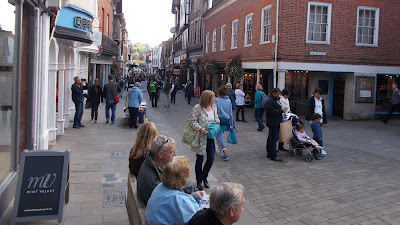 Walking is something we just do and take for granted.
(Winchester City Centre)
In England, walking accounts for 5% of the distance people travel, but it accounts for nearly a third of trips and so we are talking about it being firmly about local trips. The Pandemic has reduced the number of overall trips people make, but walking locally has remained high and important for all of the good reasons of it being cheap, easy for most people, low carbon and good for overall health. When I refer to walking, I need to be clear that this includes people using wheelchairs or mobility scooters and pushing prams and buggies.
Walking as a mode is a devolved matter in national policy terms and ultimately, the management and improvement of walking networks rest with highway authorities, although district, parish, town and community councils have limited local powers. This fragmentation means that local custom and practice has evolved, walking will have different local political priorities and getting consistency challenging.
Auditing is a way of using a consistent approach to measure the quality of the walking environment. There are lots of systems and approaches out there such as;
There are also other tools which look at wider issues, but include walking such as;
Personally, I like the Healthy Streets and Place Standard tools and some authorities have variations. However, for user-friendly and quick assessments which anyone can pick up and just use, I'll go to the WRAT every time.
WRAT has its origins in the Wales Active Travel Act Guidance and is used to help develop active travel network maps for the country. There are a range of tools which professionals can use to undertake audits and then to use them to help shape delivery programmes and priorities. However, I am going to concentrate on the WRAT which is a spreadsheet-based system.
The original Welsh spreadsheet is here, and it has also essentially been co-opted by the Department for Transport in the English Local Cycling & Walking Infrastructure Plans Guidance, here.

Extract from the DfT version of WRAT
The spreadsheet is split into five themes which won't be a surprise to many of you, because they are the same five themes for good cycling design;
Under each of the themes, there are items which can be scored. Attractiveness deals with the maintenance condition, fear of crime, traffic noise and pollution, plus anything else which might be appropriate to the location. Comfort is about having level footways without trips, a good width for the situation, a lack of footway parking (or at least a decent width left), plus an "other" line.
Directness is about desire lines being cater for in terms of footway routes and crossings, ease of crossing the road, sufficient green man time and an "other" catch-all. Safety is around traffic volumes and speed with good visibility. Coherence looks at having appropriate dropped kerbs and tactile paving. 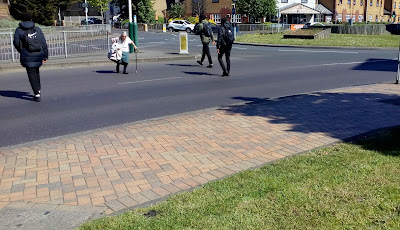 A desire line over an urban dual carriageway. This is
where people want to cross and even though it is so
hostile, people are prepared to cross because it is direct
and far preferable to other options.
(Romford town centre).
In terms of assessment, the spreadsheet is used to score each street or section of street (as you see fit) as a 2 (green), 1 (amber), 0 (red). The Wales WRAT has space to record critical issues and to give a revised score to suggested improvements. The DfT version is simpler with space for comments and suggested actions. There are a total of 20 things to assess which means a maximum score of 40 points. In the Welsh experience, sites which score at 70% or better (28 points) is taken as suitable to include in local network maps with other sites needing work and this was taken on board by the DfT version. 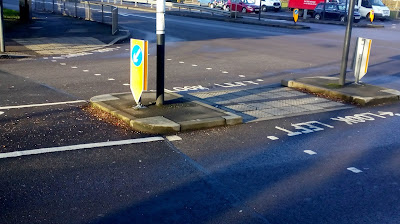 You might want to chop long streets into sections
and assess large junction separately. It's up to you which
makes the WRAT a really accessible tool.
For someone undertaking an audit in their community (and especially if you are not a professional), the DfT version is simpler. If you are using WRAT as a campaigner you can of course make suggestions for improvement, but it's not your job to redesign a street for the highway authority - people are paid to do that after all!
What is nice about the WRAT is it's scalability. You can use it for your own street, you can chop up a long street into sections, or you could concentrate on a junction if you wanted to. I have used it for quick assessments where I've done a rough and ready review of an area (such as a business park) on a street by street basis using Google Streetview to give a starting point to more detailed conversations and work.
One thing which is missing is a summary sheet and so what I like to do is have a WRAT sheet for each street or section running in my workbook which scoring summarised and linked to a summary page. Here's an example of what one can do, in which I have used the Welsh 70% threshold for "green" and 60% for "amber",

There are limitations to WRAT. It won't give you the granularity that some of the more sophisticated approaches and of course it doesn't cover the wider things we need to cover in street design and management. However, it doesn't matter because it is aimed at developing network assessments quickly and we can come back and look at things later.
So, it might be helpful for a little bit of a worked example and so I have picked a nice controversial street to score - Exhibition Road in London. 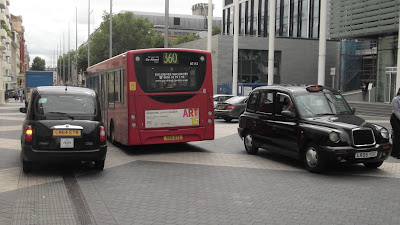 Exhibition Road. A so-called "shared space" scheme.
I am going to have a look at the section between the junction with Kensington Gore and the junction with Cromwell Road. I'll take this as one complete assessment rather than breaking it down because of brevity, but within about 30 minutes using Google Streetview, a bit of my own experience and a local authority report, I have scored the street at 26/40 (65%). With my summary table idea, this would an "amber" score and one could plot this on a map if the wider area is being looked at.
You might not have access to traffic flow or speed information and so you'll have to come to a view in many cases (or maybe do a bit of survey work yourself. From the scores, you can also see how things tend to be weighted towards comfort and directness. Everyone will have a view, but it's a tool to compare like with like.
In terms of comments on what could be improved, it would be to significantly reduce motor traffic on the street, provide much clearer tactile paving at formal crossing points and a bit of speed reduction work. Addressing these to items would maybe get the score up to 32 (80%) and maybe reflect the southern end of the street which is filtered from through traffic (below). 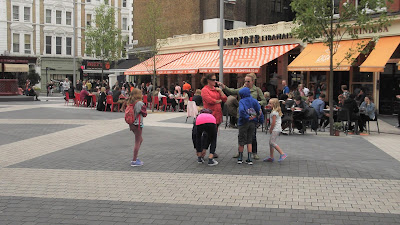 If you want to look at my example in detail, then you can download a PDF here. Of course, you are allowed to disagree with my assessment! Anyway, have a look at a the tool and have a go yourself.
Posted by The Ranty Highwayman at Saturday, November 06, 2021