Right You Blasted Politicians, You Damn Well Need To Act!


The all party parliamentary cycle group has published its report following the "get britain cycling" inquiry. For me, there is a huge amount of evidence-based detail and expert view, but the one thing which shines through for me is that politicians of all parties and at all levels need to get off their backsides and provide leadership.

The full report by Professor Phil Goodwin can be accessed here, with the summary and recommendations accessed here. This blog will not debate the detail, but I want to cover three things.

First, here are two paragraphs from the foreword to the summary by Ian Austin MP and Julian Huppert MP;


"Above all, we need a bold vision from government that puts people first. We need those strolling the corridors in Westminster, throughout Whitehall departments and in town halls around the UK to recognise the powerful case for substantial investment in cycling, and the huge benefits this would deliver for town and countryside alike."

This generation of politicians has the chance to be long remembered for having a vision for cycling that includes us all. 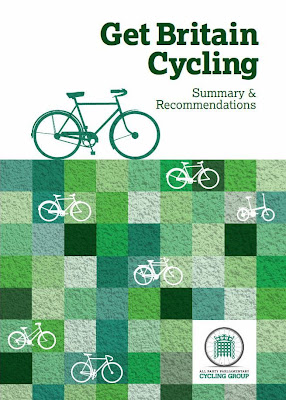 I have still to digest the full report, but as far as the summary goes, I fully endorse the whole lot; and all of us with an interest need to stand united in support. I am sick of not being able to design the schemes I think we should be designing, I am sick of having to weave through stationary traffic and I am sick on not being able take my kids to school, the shops or the park by bike.

This either feels like a tipping point or a last stand to me...

The report was raised by Julian Huppert of the APPCG at Prime Minister's Questions on 24th April which can be viewed here from 29'53". The House was noisy and seemed to try and drown out Huppert with a slightly sarcastic intervention by the Speaker (in my opinion) between the question and the response.

To save you the effort, I have transcribed the exchange;

Today sees the publication of the All Party Parliamentary Cycling Group's report “Get Britain Cycling” which calls for leadership from the very top on this issue. Will the Prime Minister look at the report, will he make sure that he produces a cross-departmental action plan, will give his personal commitment and leadership to get Britain cycling?

I don't always agree with what the honourable gentleman says but on this occasion he is absolutely right and the house should heed what he says, we should be doing much more in our country to to encourage cycling, I think the report has many good points in it, I would commend what the Mayor of London has done in London to promote cycling and I hope local authorities follow his lead in making sure that we do more.

So, there we have it, Cameron is not bothered about leading on what is a national issue which touches far more than just transport. He essentially thinks it is down to local authorities to deal with this issue, using the Mayor of London as the example of best practice; and they have all done so well up until now!

Posted by The Ranty Highwayman at Wednesday, April 24, 2013