Wow! I Never Saw Him Coming

I was going to post something about cycle route design this week, but unexpectedly I am covering something which happens all the time - poor driver behaviour

I come from a pretty car-centric highway engineering culture and those of us who cycle are seen as strange, often marginal people and given the local model share, I guess we are. But, for the last couple of years I have been trying to do better for cycling, despite what some local campaigners may think - it takes time for culture to change and I don't have all of the answers; it is a case of ride and learn!

At least where specific cycling schemes are being looked at, I insist that those undertaking the design also ride the route during development and following implementation. To be fair, the same has been going on for schemes to help pedestrians for some time as it is traditional for one to get out of one's car to make a site visit! It is slow, but the culture in the wider office is starting to change.

Photos are a very important part of reviewing routes and schemes as you have something to point at to help you remember. Rather than having to cycle along holding my camera or having to stop every 100 metres (which is what I had been doing) I recently invested in a pretty cheap handlebar mount for my digital camera, the trusty Fuji Finepix L55. I carry the camera in my bag and at 12 megapixels, it is perfect for snaps for work or personal use (including many within this blog!).

It has been sitting on the shelf for a bit, but I finally bolted it on last weekend. Earlier this week, we had a nice sunny day and so I spun the camera onto the mount and set of for my 3.4 mile commute to see how the camera performed in video mode. I set to the lower of the two quality modes, hence the still quality below - high quality is good, but about half the record time.

I have been cycling the same route pretty much every weekday for nearly three years. I cycle year round; and only when the rain is really bad in the morning (getting wet going home is no real issue), or if it is snowing, or if I am going to the pub after work will I not cycle (then it is the bus).

My journey is part on a shared-use unsegregated cycle track and part on the carriageway, mainly with advisory cycle lanes. In all honesty, there are not normally any issues as those stuck in the tidal traffic jams tend to keep out of the cycle lane and in fact move over. Many people give me plenty of space. Some don't, but it doesn't often phase me. I do need to remember that when I am in engineer mode, I shouldn't really be designing for me.

The first half the journey was business as usual, including having to check for traffic when the cycle track goes over side roads. I had to wait for 30-odd seconds at a side road which is signalised for road-traffic, but where pedestrians and cyclists have to dash for a gap.

The usual two-stage toucan took me 35 seconds to cross with traffic queued over it and there were delays in traffic where I joined the carriageway in a wonderful multi-lane traffic jam which is certainly not a place for mass cycling.

I snaked my way past some of the traffic to the head of the queue where I stopped at red traffic signal which lets people out of a side road which was backed up as normal. Ahead, there was a short gap in the traffic through the junction and the road goes into a normal single carriageway which is also normally backed up. 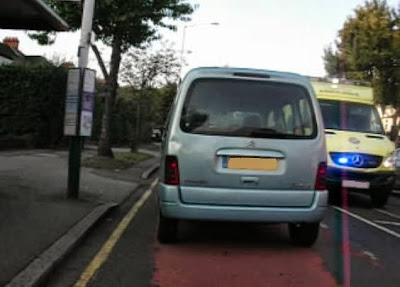 As I moved off on the green, I noted two cars from the side road jumping their red, but this was soon forgotten as I filtered up the nearside in the advisory cycle lane. I heard the oncoming siren before the driver in front and was ready for him when he pulled in front of me without looking to let the ambulance through, but I wasn't fazed and he only slowed me by 10 seconds.

Off I went again, passing the traffic jam and I went for a whole 2-minutes, just having to kick right where the driver of a large car had stuck her bonnet out a bit into the cycle lane.

Then I saw the black van. I think that those who have cycled in these conditions for a while do develop a nose for some vehicles and something told me to hang back.

Well, the traffic started to move a bit and matey snuck in front of me approaching a zebra crossing with a refuge, so I stayed back. The driver then saw his chance because he must have known about the next set of traffic signals ahead having two (narrow) traffic lanes.

Not letting a little thing like the cycle lane or the footway worry him, the plucky driver stuck his foot down and managed to undertake a bus, bouncing back onto the carriageway to avoid a thoughtlessly placed traffic sign. He was triumphant as he beat the bus. What he seems to have forgot is that he has a company name and website on the back of the van and so this, along with his registration has been reported to the Met. Police's "Roadsafe London" website. I have already had an email from them and have provided them with the footage.

The traffic started to move much better now and I was soon left plodding in the cycle lane and eventually I reached my destination 17 minutes and 40 seconds after I started. It was a bit slower than normal as there seemed to be a little more traffic about than last week, but I put this down to traffic being a touch lighter for most of September as people take their holidays after the kids go back to school. My average speed was 11.5 mph, probable more like 15 mph when not stationary. Not fast, but good enough for me.

It was only when I got home and downloaded the video for a look did I spot two more incidents. First, the driver of the same bus which had been passed by black-van-man decided to overtake me on the approach to a zebra crossing with a refuge.

Luckily, nobody was waiting at the bus stop just after the crossing otherwise the driver might have picked up an extra passenger. The daft thing is that the traffic got bad a minute later and I passed him again. 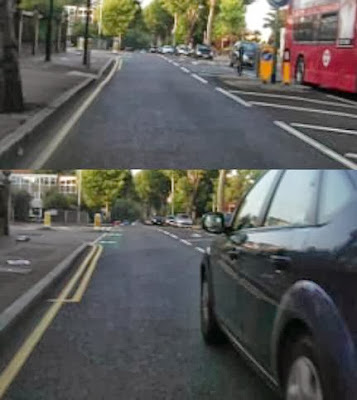 Then as I got near the end of my journey, it turns out a car squeezed me at a pedestrian refuge. There is no cycle lane on this section of road, but it is often a lot quieter as the busy traffic from has peeled away and stretched out.

Although not attractive for everyone who would love to cycle, it is the kind of thing those of us on the road daily just deal with. This pedestrian refuge doesn't have a constant stream of pedestrians, but I often see people crossing. My relationship with refuges is complicated and may well be a post of its own.

The running lane isn't a terrible width and I do leave myself room to wobble about and as the camera is on the right-hand side of my handle bars it looks worse. But, had he been a little closer or I a little wobblier?

So, here is one random trip to work of a random cyclist within a huge city and in the space of less than 20 minutes, we have one reckless idiot driving a van along the footway, one person not checking before pulling left and two people squeezing me at refuges. The shocking thing for me is that I didn't notice the last two incidents and I assume it must happen so often that I deal with it on autopilot.

I don't want to do my commute with a camera as I will end up getting obsessed with downloading them and reporting things to the police. It is not because I don't want these people dealt with, I do. But, life is busy and I want to use a bit of my free time to write this blog rather than go after idiots on the road. But, there are lots of people out their using (far better) cameras and so those behaving badly need to be aware that there are eyes on them. 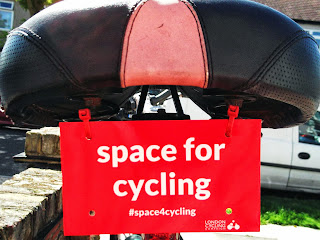 Everything is a learning experience. As well as having to think yet again about the needs of pedestrians versus the needs of cyclists with the use of refuges, this analysis of a normal journey reinforces how abnormal it is against the backdrop of the "normality" of those so-called "zombie" drivers sitting in traffic.

I am even more convinced that we have to spend serious money to make walking and cycling better. My journey is in the magic 3 to 5 mile band; exactly the journeys we can target to free up road capacity. Those people in the traffic jams I passed really do need to be supporting Space for Cycling as well as people like me as it will free up capacity.
Posted by The Ranty Highwayman at Wednesday, October 02, 2013