I am by no means a materials expert, but with surfacing materials I know what I like as both an engineer and a user. so this week, some of my thoughts.

About ten years ago I had some development control work dumped on me after a colleague left. One scheme included a short walking and cycling link. It was a typical tarmac path with a white line along the middle. Half for pedestrians, half for bikes. Not great, but not bad. The thing that struck me was that the surface had been machine laid.

The contractor's next job was to coat the cycle side in green surface dressing and I suggested not as the machine-laid surface was far superior that the hand applied surface dressing could ever be in terms of ride quality. Sadly, I didn't get my way as the drawings were all agreed, I was a bit green myself on the development control side of things and the developer wasn't interested, so we got stuck with it. I have since learnt how to play the developers at their own game (when necessary) and the vision of a machine-laid cycling surface stuck with me as the best approach even though this was several years before I got serious about day to day cycling.

Last week I posted my thoughts about the upcoming London - Surrey 100 and the need to get some miles in. So, last Saturday I hit the road. Part of my run took me through Stratford and lo and behold, the new protected start to CS2 was closed with cyclists being pushed into the live carriageway. As I went past, I noticed that the blue surfacing had been redone, but it looked like anti-skid rather than the smooth blue "gunk" that was there before.

I need to explain a bit more. Much of the London Cycle Superhighway network is coloured a rather hideous shade of blue which is either the corporate colour of the original sponsor, Barclays, or the Mayor copying what he saw at some junctions in Copenhagen. Whatever was put down originally on the carriageways appears to have failed in places and I am still not 100% sure on all of the materials used.

TfL did test various surfaces in advance as shown in a Freedom of Information request. I suspect much of the surfacing was a kind of paint. Certainly, the section of CS3 by the A13 is a good example of what I mean - you can see that the stones of the tarmac surfacing are simply covered in a thin layer of paint because you can still make them out - probably epoxy modified acrylic.

There are also patches of blue thermoplastic here and there (hot, poured paint which is used for normal road markings) which pick out places which people on bikes may be found overtaking buses. We also have the on-carriageway "stripes" along the carriageway edge or in the cycle lanes (where present) which is a very smooth surface indeed. From my research, I think it is some kind of polymer concrete slurry which gets applied to the surface with a squeegee type arrangement.


Anyway, much of this surface is smooth (apart from the odd pothole), but the anti-skid is nowhere near as good. Anti-skid normally comes in two flavours. Either a thermoplastic which is hot poured or a cold-applied resin which is squeegeed around and then coloured chippings applied. It is well worth reading up on this on the excellent Highways Maintenance website. Antiskid is usually used in areas of high vehicle braking such as on the approach to zebra crossings and is basically expensive stone and other materials which give high levels of grip.


On cycling schemes antiskid is often used to paint in areas of conflict. London had tended to use green stripes and other parts of the country red stripes in locations such as where cycle lanes pass junctions. the problem is that antiskid has a thickness and can make riding over it uncomfortable. It is also bugger all use at night unless the area is brightly lit with white light.

The thermoplastic option is often quite uneven and even worse to cycle on. Resin can be better, although the loose stones can be an issue in its very early life. The other thing is that if traffic is using it, then eventually it wears out and potholes appear with the coloured versions having a particularly poor design life (perhaps 5 - 7 years). Everyone has there own views about unprotected cycle lanes, but purely in surfacing terms, I am not a fan - I would rather ride on a machine laid surface.


And that is the point. When we surface a carriageway, we tend to do it with a machine-laid asphalt material. The old surface is planed off with a road planing machine and the new surface laid with a paving machine. Some of this kit is extremely sophisticated using GPS and computer controlled sensors to lay very smooth and flat surfaces. Some even continuously check the temperature of the material being laid for quality control.

Obviously, there is an awful lot more to it, but I wanted to give an idea of what goes on. Of course, even resurfacing works need some proper thought and a new scheme has to be designed to get the levels to work properly anyway. So, rather than all of the blue which went in to the Stratford section of CS2 and all the blue going in again, what would I have done?


Well, assuming the levels were right (and some are not as can be seen in on CS2), I would have gone for a machine laid asphalt surface. There are two types of materials I would have looked like and they are known as AC10 and 55/10.

AC10 is an "asphalt concrete" with a maximum stone size of 10mm. It comprises of crushed rock (or recycled aggregates) of 10mm and smaller bound together with bitumen (the "binder"). It is suitable for relatively low stress areas (estate roads and of course cycle tracks).

We often see AC6 (6mm stone and smaller) laid on footways and cycle tracks which is fine, it is just AC10 gives a little more grip. Then there is 55/10 HRA or Hot Rolled Asphalt with 55% of its makeup comprising of 10mm stone. HRA differs from AC in that it has an awful lot more finer materials within its matrix. Again, it is all bound together with bitumen. You will recognise "normal" HRA on the streets because stones get applied after the material is laid (but hot) and they are clear to see - they are for skid resistance. 55/10 HRA does not need anything applied for grip in the same way because of the high single sized stone content.


AC10 is cheaper than 55/10 HRA and I would always go for the latter given the choice because it is absolutely bullet-proof if properly laid and laying is the key. If you really need colour, both can be found in a variety of shades, although AC10 will have more choice.

Unfortunately, most of the cycle tracks I have ever ridden on have been laid by hand and I have been involved in the construction of some. This is essentially the road workers dumping a pile of the surfacing material, spreading it around with rakes and then compacting it with a roller. While some crews can do some fantastic hand-laying, they can never do as well a machine and on a bike, one can feel every bump and ridge - look at a cycle track surface with low sun and the shadows are a give away.

The reason we end up with hand-laid AC6 is generally because engineers and the contractors working for developers and local authorities don't often know better.

To machine lay, we obviously need the paving machines and even small ones can be quite heavy and the lorries delivering the materials are also heavy. In the UK, we traditionally tip the asphalt from the lorry directly into the paver which is fine for roads designed to take heavy loads, but no good for more lightly constructed cycle tracks and footways. It costs money to make the cycle tracks more heavily constructed and that is often where we are let down - lack of proper budget.

It won't be a surprise that other countries have worked out that mini-pavers are the key. Some are mini-versions of the road going kit and have to have the material placed with a grab or digger (to keep delivery lorries off the cycle track). Some can be fed from the road with the laying part of the machine sticking out the side such as on this US video:


UK contractors are perfectly capable of doing this, it just needs to be insisted on by those running the schemes and it means that we should be writing this into our contracts, drawings and specifications. I had a conversation with a contractor a while back about laying cycle tracks. He was happy to use a mini-paver, but he didn't have a grab lorry he could use to lift in the asphalt (it would need to be dedicated to asphalt really). Also, as much of the asphalt is delivered by suppliers, they won't wait on site to be unloaded by a digger - emptying into standard road paver doesn't take long.

So, back to CS2 - although the blue is all about way-finding, I cannot see anyone getting lost on the protected sections, so why not use a machine laid black surface instead of expensive anti-skid. That is how they do it in Copenhagen. If we need a colour, then use red like the Dutch as UK suppliers often have it available.


Of course, we have other materials such as concrete and block paving. Both are fine for cycling on if they are laid properly, although concrete has joints which can be felt. Natural stone slabs and the like are fine if properly laid and are machine sawn - I cannot stand cobbles or anything rough because of the ride quality and actually some types of stone and/or their finish is slippery in the wet.

No, for me, simple machine-laid AC10 or 55/10 HRA is my idea of cycling utopia (well from a surfacing point of view anyway!)

Update 30/3/14
Oh and just to show that I am not just a one track HRA dinosaur (Andy R!), I will leave you with a street paved with multi-coloured granite blocks - Lower Marsh near Waterloo Station! 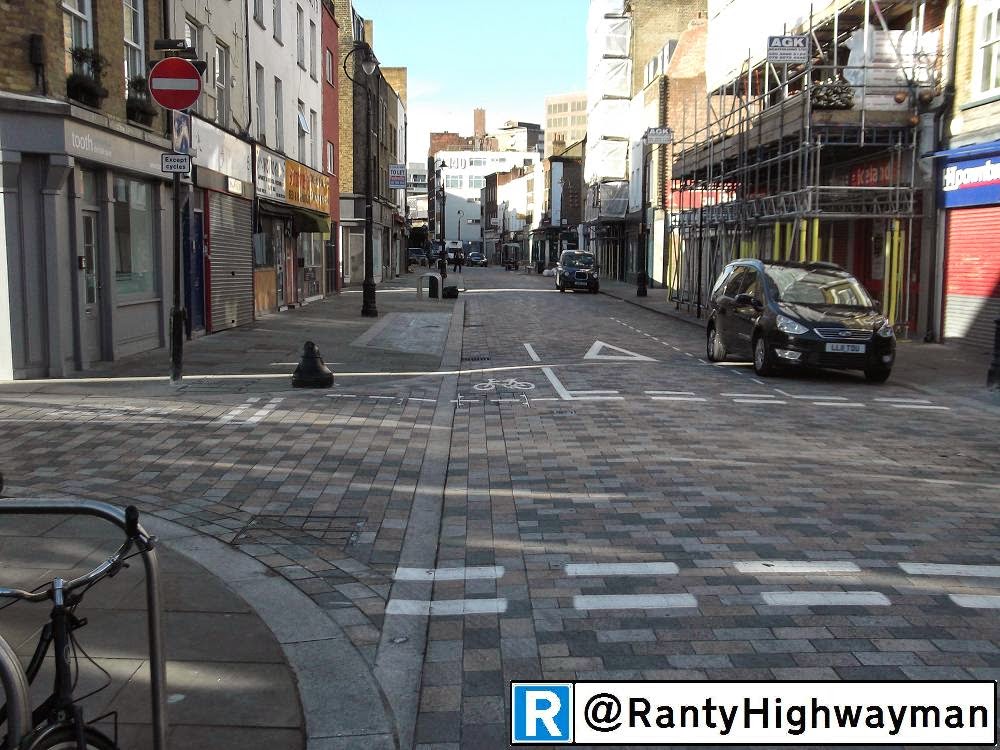 Posted by The Ranty Highwayman at Saturday, March 29, 2014