Thinking Outside The Box

While catching up on Facebook last night, I came across a link posted on the Stop Killing Cyclists' page relating to a box junction in Hackney which, according to a story on the website of the London Evening Standard, "rakes in almost £1m each year". 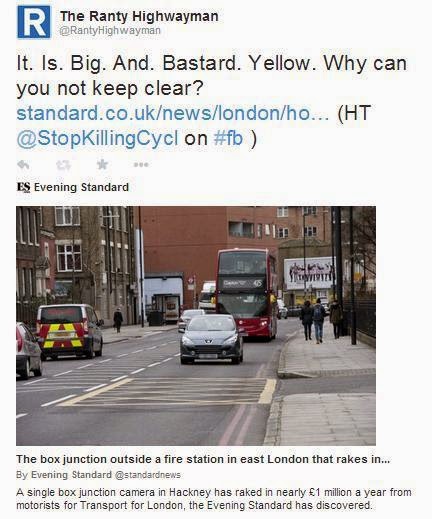 I reposted the link on Twitter with my rather flippant take and with my tongue (slightly) in my cheek (hey I only have 140 characters). There were a couple of responses which had little sympathy for those being caught out and a reporter from the invited views by email for the letters page.

The offending yellow box is outside Homerton Fire Station on the A102 Homerton High Street, a road controlled by Transport for London. A yellow box outside a fire station is pretty important I would suggest and yes, there is a camera being used for enforcement.

Now, I confess that I don't often read the papers, although I do pick up quite a bit online. I certainly don't write letters to the papers as the letters page is normally guaranteed to send me whirling off in a rage at other people's stupidity (yes, it is arrogant I know). But, I was up early and had a few minutes to kill, so I put fingers to keyboard and wrote this and emailed it in (I have added a couple of links which might be of interest which were not in the email). I don't know if my letter reached the paper and it is not on the website at the time of posting this, but here goes;

"Yellow boxes are a symptom of motor-traffic congestion and the selfish attitude of some drivers who think their progress is more important than that of other people; and in this case, the London Fire Brigade. Yellow boxes are provided to keep traffic flowing and if someone "accidentally" rolls into one, then they are driving too close or not paying enough attention.

In a crowded city such as ours, we should question the sense of many who choose driving in these congested areas, accepting of course there are people who need to drive (and I put the London Fire Brigade way up the list). As long as the restrictions are properly and lawfully deployed, the majority of us should not lose any sleep over people getting caught out - I would rather that than someone dying because a fire engine was stuck.

There may be a wider debate to be had about the level of fines (which are set by London Councils' Transport & Environment Committee on a city-wide basis), although my view is that they have to have a deterrent effect and penalties for more serious offences are nowhere near high enough. All those crying foul can of course raise the issue with their local councillor or GLA member who can ask if that yellow box is really needed, but it requires personal effort which is in short supply these days.

So, moan and whinge about getting caught all you want, in the bigger picture of things, there is not much sympathy for you and in the case of a yellow box outside a fire station, it is because there are some journeys which are far more important than yours."

The Evening Standard's story also has a little film to go with it with the usual talking heads who take a hostile view (on the whole) to the yellow box and one of the people interview clearly hasn't a clue about how yellow box junctions work. There are also comments at the end of the story which miss the point in my view.

Of course, I always like to dig deeper. The story reports that after a Freedom of Information request;

Yes, the maths is spot on, but of course it is all averages and so I would lay odds that most fines are at busy times as when it is quiet traffic is moving! Minor moving traffic offences (which I think covers yellow boxes) is set at £130. The average fine based on the figures is £68 a time and so this indicates that the vast majority of people are paying the fine without argument and quickly as there is a 50% discount (£65) for quick payment.

The other bit of interest for me is that as the street is the A102, there is some very convenient traffic flow information available from the Department for Transport (site 8064) and the count point is really close to the fire station! In 2013, there was a total of 20,853 vehicles a day at this location. This is estimated and averaged, but in the one direction the yellow box operates, we are talking 10,426 vehicles a day. 40 fines per day are being issued which is less than 0.5%. Clearly, 99.5% of people driving past the fire station manage to keep it clear. Yes, I know I am using not getting caught as a proxy, but it puts the whole thing into perspective and I for one am entirely comfortable relieving these people of their cash to help fund other transport projects!

Update 21/1/15
It turns out my letter was published, but I didn't see it. So, if you have a copy of yesterday's paper, be a sport and post a scan or photo :)

Posted by The Ranty Highwayman at Tuesday, January 20, 2015