This week (Wednesday 6th May) I attended a seminar on inclusive cycling which was being jointly held by the London branch of the Chartered Institution of Highways & Transportation (CIHT) and the London Cycling Campaign (LCC).

I don't know if these to groups have ever met like this before, but it was a cracking idea and I really hope it happens again. Of the 40 (my guess) or so people who attended I think the split was about 50/50 campaigners and engineers, although there were quite a few of us there who belong to both organisations!

Perhaps it is a sign of change in London when a meeting like this; perhaps the silo mentality is gradually breaking down. I certainly hope so. Chair for the evening was fellow CIHT and LCC member, Philip Loy who introduced three speakers who I am sure many of you know (at least on Twitter!); Dr Rachel Aldred of the University of Westminster (yes another CIHT and LCC member), Isabelle Clement of Wheels for Wellbeing (self-confessed fair-weather hand-cyclist) and Phil Jones of Phil Jones Associates (another CIHT member, and as he spends so much time in London on a bicycle, I am hoping a potential LCC member!).

Now, I was there to learn and although I attempted a bit of live tweeting, I did get absorbed into the discussions and so this post I guess is a summary of the highlights or interesting points (for me at least).

Rachel Aldred's theme was essentially why inclusivity matters and how it should be central to good design (in its widest sense). Something which is designed to assist and enable specific people will also help the wider population. She went on to explain that cycling is a way to enable people move independently, even when walking might be difficult, and so we should be concentrating our efforts on designing for under represented groups as after all, we get the people cycling who we design for. 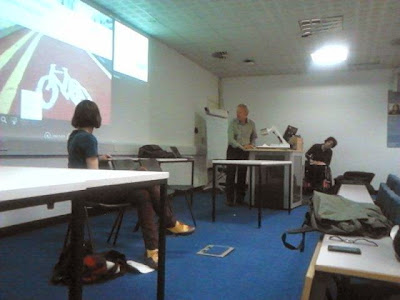 The next good point made by Rachel was that the Equality Act 2010 gives local authorities additional duties, including the important "equality of opportunity" which extends to being a transport provider (i.e. highway authority). When put in cycling terms, it means that designs which are not usable by all will deny the opportunity of use to some, and so the "old" way of designing may arguably be indirectly discriminatory. My observation was that highway authorities need to up their game as a challenge under the Act is bound to happen.

Isabelle Clement spoke next and started with a personal history on how she came to hand-cycling, starting in parks and then gradually moving up to using the roads, but as a way of getting from A to B; although she admitted that she was rather fair-weather! She did explain that she had been going through a steep learning curve on the technical side of things, but at least knew what a splay kerb was - nice!

The serious part of her talk was that "we" have been designing for people who can walk their bicycle, lift it up steps, cope with kerbs, can stop and stay on the saddle and so on - in essence a narrow group of people. She explained how traffic calming of various types presented significant disadvantages to many people such as those using tricycles and hand-cycles. Speed cushions, for example, were cited as a particular problem for cyclists on more than 2 wheels. She also suggested that we had forgotten about those using trailers, cargo bikes and we really need to be designing "beyond the bicycle" which is a great way to put it. 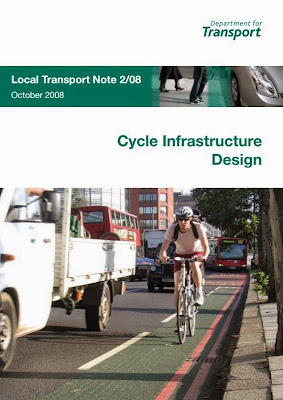 Phil Jones then spoke about some of the design standards and engineering which needs to go into inclusive cycling. He reiterated the narrow nature of the target cycle user so far which was telling given the front cover of the official government guidance in Local Transport Note 2/08 (see left). He said that regular cyclists are most likely to be male, white, in work and non-disabled.

He went on to say that LTN 2/08 does recognise children and disabled people, but it all gets rather vague and is out of date. In terms of the Equality Act, it is referenced in the new London Cycling Design Standards which also sets out a range of different types of bicycles which need to be designed for. Beyond that, he said that the Wales Active Travel Design Guidance has looked at inclusive cycling and on that aspect was ahead of the Dutch and the Danes!

At the discussion/ debate at the end of the session, there were some good points made and questions asked. Isabelle said "cycling cannot be survival of the fittest" which was a double-pointed issue in my mind in terms of how people often have to cope now, and how the conditions put so many people off.

A question was asked about what might happen after Boris if we had a less interested Mayor. It prompted comments about the Mayor perhaps not being that interested (half-jokingly), but the panel felt that despite a lack of National guidance, London seemed to be doing well at officer level within TfL which would give continuity as after all, politicians always come and go.


There was a point made about needing standards to take us beyond guidance as engineers want to be able to refer to numbers and parameters and in turn they would be pushed to do better. The panel was warm to the idea, but standards would have to cater for all users. Phil made the point that Highways England would be releasing an Interim Advice Note on inclusive cycling and while aimed at trunk road schemes, it would provide a "design vehicle" which if used to design a scheme, would cater for all.

We had a question about the gap between design standards/ advice and what we can afford to build with the gap getting greater as new standards get better. Rachel said that there were always underspends in London (so money is not necessarily the issue), but it would be better to go for the highest standards and spend properly on fewer schemes. This led to a point about campaigners using the new LCDS to measure the quality of current TfL and borough consultations. On the subject of boroughs, a good point was made about staffing cuts being a huge issue with volunteers often being expected to take up the slack.

Yes, an excellent session which leaves me with this thought ; for engineers "beyond the bicycle" should mean that we are designing for inclusive active travel with high levels of experienced safety. As well as applying to those riding bicycles, it equally applies to those walking.