I'm sorry, but this is another London-centric post, but three things of interest caught my attention this week which have some linkages. 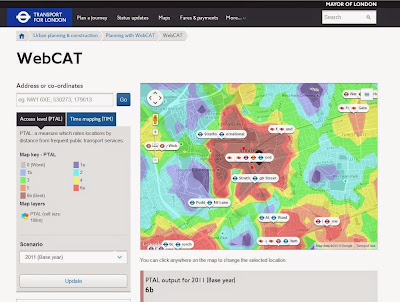 First up was the launch of WebCAT by Transport for London which is a transport planning tool which can be used to look at public transport connectivity across the Capital. Three systems are available on a map-type interface; PTAL (Public Transport Access Level) which scores locations based on their proximity to public transport and its frequency, TIM (Travel Time Mapping) which shows how far one can travel within a defined time and Catchment Analysis which shows how many work places or different types of services exist within a certain travel time of a place. The system replaces the TfL Planning Information Database which was also web-based, but showing its age. 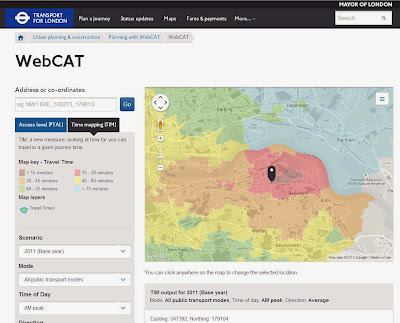 The graphic above an example of a PTAL output for a location in the centre of Stratford and unsurprisingly, it is the highest at 6b. The graphic to the right is a TIM output centred on Abbey Wood Station and is a series of isochrones of travel times from that location.

I have only just started looking at the tool and there is much more to it than I have set out. For the day job, I will use it to double check PTALs for development sites which will have a link back to local planning policy on the parking provision that one would expect to be provided for a site. Where PTAL is at the highest end, the provision will be less than one parking space per unit and where the score is at the lowest end, it will be 1.5-2 spaces per unit. There are variations for density and unit type, but I shan't go into detail here (the parking standard relates to off-street parking).

This Government is firmly of the view that more parking spaces should be provided alongside new homes that families want and need. This is especially the case in areas where access to public transport remains low. But even in urban areas, an insufficient number of parking spaces - which may be caused by maximum parking standards amongst other reasons - risks creating a 'vicious cycle' where clogged up streets leave motorists to run the gauntlet of congestion, unfair fines and parking restrictions."

Well, I suppose this unified approach from the Mayor and the DCLG doesn't come as any surprise given the politics (in general) of Outer-London. The issue they are attempting to address is that in Outer-London, many areas have low PTAL scores and so people will rely on private cars to get around. We have had maximum parking standards for years now (if a developer proposes more than 2 spaces in a low PTAL area, it is technically a material reason for refusal) and the perception is that lack of off-street parking has and is clogging up our streets with over-spill. 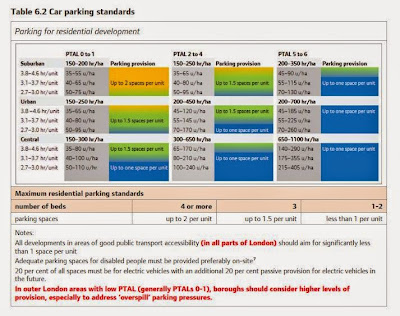 I have some sympathy with the issue, especially where people work beyond the boundary of London and let's be honest, public transport is pretty sketchy and cars are used (the PTALs are low of course). The Mayor could of course look to influence Outer-London policy and improve public transport and I suppose he is in places (Crossrail for example), but unless you are travelling to a town centre, moving around the outer boroughs can be a problem by public transport. I also agree that over-spill parking is an issue, but there is only so much kerb-space and boroughs can control use themselves to deal with the issues.

Thinking about my own area, for parts of the borough with a low PTAL (2 and under), the parking standard is 1.5-2 parking spaces per dwelling for houses and 1-1.5 spaces per unit for flats (as a generalisation) and this is repeated across many outer boroughs (with local variations). The proposals in the amendment actually reflect what is policy in Outer-London boroughs anyway and so I cannot see much changing in approach, although it is telling that for PTALs of 0-1, boroughs should be considering higher levels of provision - executive homes anyone? The London Plan was always for lower standards and this is something which has caused political tensions. It is also worthy of note how we have provision for electric vehicles (EVs) woven into the policy which brings me on to the third thing of interest this week.

I had a pop at how the Government was pushing EVs a couple of years ago and they show no signs of stopping. Using public subsidy to help people purchase EVs, the motor manufacturers clear know that the writing on the wall is there for petrol and diesel and so there is heavy investment in clean alternatives (so long as the electricity is renewable of course). I have no issue with the technology if it is applied to buses, vans and taxis and perhaps car clubs, but replacing one fuel for another won't deal with the parking issues and poor PTALs discussed above.

One of the biggest issues for EVs is so-called "range anxiety" which is the worry that one will run out of juice and get stuck. Those of us who use public transport can empathise when we miss the last train or bus home! The way to deal with range anxiety is to establish a network of recharging points so that people can stop to top up their power or trickle charge overnight. In London, things have not gone well with lots of different systems (some public on-street, some in private car parks), sporadic maintenance, charging points often out of action, no proper network and a lack of a unified system - as a result of planning policy I would add. TfL took the lead and set up Source London to try and run the system on a city-wide basis, but this was sold on last year to French industrial, Bolloré Group's sunsidiary, IER for £1 million. Bolloré has fingers in world-wide pies including transport and electricity storage systems.

IER has been negotiating with London Boroughs and private operators to take over existing charging kit and to roll our a proper pan-London charging network. Where on-street charging points are concerned, they are also seeking to get dedicated EV parking bays provided (with revenue for the local authority) and the whole thing bundled up to be simple for members of the system to find and book charging places. There is ambition here and IER is taking on huge risks to make this work beyond what TfL could ever have done.

Of course, this all means that for private car journeys, the policy and investment in London will conspire to keep those Outer-London PTALs low and allow the free movement of private motor cars across the Capital with all of the the safety, heath and societal problems it brings. EVs are also exempt from the Congestion Charge and so there is an obvious attraction for the Outer-London executive in their multi-parking space home to ditch the train in favour of taking the Tesla S to the office. Me? I'll stick to my bicycle.
Posted by The Ranty Highwayman at Saturday, May 16, 2015