So this week, I found myself in the city of Deventer which is to the east of the Netherlands. It was a last-minute trip which involved lots of travelling, but it still gave me a little time to experience a pretty ordinary place by local standards, but I like to celebrate the ordinary.

This post comes with a health warning; my visit was short and the things I saw were only snapshots; so I cannot possibly detail their intricacies or whether they are good examples or not. Please take this on board and note that I call it as I saw it. Also, please correct me using the comments, I am sure there are things I have got wrong.

My 560 mile (900km) round trip took advantage of the "rail-sail" ticket which gives train travel from anywhere within the Greater Anglia area to any NS (national) train station in the Netherlands via the Stena Line's very civilised Harwich to Hook of Holland ferry. I imagine the rail deal is available because Greater Anglia is run by Abellio which is owned by Dutch National Railways! If you can book a while in advance, it is pretty good value too. But, this is not *that* kind of travel blog!

Deventer is municipality as well as a city and covers an area roughly comparable to the London Borough of Bromley. I only spent time in the city core which is about 1km by 1km. It is bounded by the River IJssl and some other bodies of water, with a kind of ring road, but not one with multi-traffic lanes everywhere, perhaps akin to a UK strategic road in Outer-London (i.e. not a trunk road).

A general observation was the main roads outside of the core had cycle tracks by or away from the roads and through signalised junctions. The protection fizzled out as one went into the core, turning into advisory lanes and then no provision at all. I didn't see it, but there is also a notoriously dangerous roundabout in the city too (thanks David Hembrow) - Dutch is not always good being the lesson here.

It did seem rather old from a cycling point of view, but still leaps and bounds beyond most of what one can experience in the UK. I don't know what the long terms plans are here, but the cycle tracks are mainly concrete tiles which are fairly old hat compared to the smooth red tarmac I saw from the train as I whizzed across the country! Mark Wagenbuur provided a link to comments made by the local branch of the Dutch Cyclist's Union on the approach the municipality takes, which basically complains that cycling improvements only ever come on the back of improvements for cars! Huh, we rarely get even that here! I also don't know what the cycling and walking mode share is in Deventer, although my impression was at the lower end of the Dutch scale (although clearly far higher than the UK). 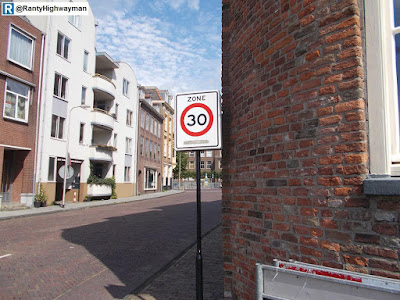 The historic part of the core contains lots of old buildings and has a pedestrianised feel. Indeed, some parts operate formally as pedestrian zones (with cycle access I think) and there is access for vehicles as well to other parts which generally seemed to be for residents and loading. Some of the residents' parking bays where signed with specific number plates!

Sometimes, the amount of traffic in the core felt a little busy, but through traffic was filtered out and from what I experienced, drivers were moving quite slowing within the 30km/h (20mph) core speed limit. 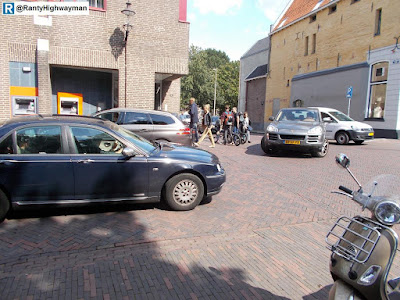 I did see conflicts in the core. A couple of times, drivers emerged from side roads and cyclists had to avoid them, although everything was nice and slow. By coincidence, schools had gone back this week and so I saw a glimpse of the school run. Actually, I saw two ends of the spectrum. In the photo to the right, the driver of the blue car was actually parked and reading a book. My assumption was that she was waiting for the schools to kick out.

The problem was that to the left of the shot, a delivery driver was trying to get his lorry out and the the photo shows another two cars trying to turn right into the street. The driver of the blue car pulled forward and blocked the junction on the main road, annoyed pedestrians, let the lorry out and then reversed back and carried on reading her book. Laziness and idiocy is clearly universal! 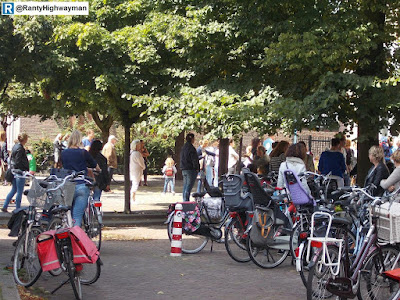 The photo to the left shows what we really want to see of course and that is parents queued up with a better type of vehicle. What a lovely kind of congestion to have!

Now, I was very interested in the cycling, but sadly my time was too short to have a go myself and besides, we should be measuring the civility of a place from a pedestrian's point of view. To a UK wanderer, the core of Deventer was mostly lovely to walk around, although the brick paviors were a bit irritating to pull a case on. I guess the treatment does have uses in terms of texture and visuals to keep the speeds of drivers accessing the area down to a low speed. 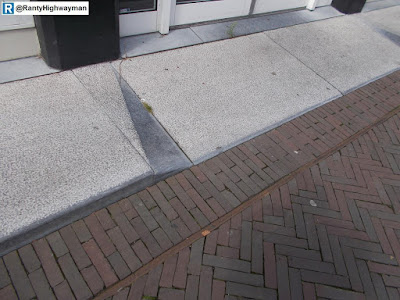 The paviours are laid as 45 degree herringbone on a nominal carriageway area which appears to be restrained from spreading by a steel rail (how it is all embedded, I couldn't see) and the margins were laid as a stretcher at 90 degrees to the line of travel. The 45 degree herringbone pattern ensures maximum strength from the paving which behaves as a flexible surface and it was a really a gentle backdrop to the buildings.

Much of the core is historic and to deal with old steps up into the shops, machined stone ramps have replaced sections of the stretcher paving to make the shops accessible to all. The paviours are just dry-laid on a sand base as is the norm, making it easy to dig them up and reinstate them. I really don't know why block paving hasn't taken off in the same way here, but the Dutch element size interlocks well and I think works well visually and structurally. 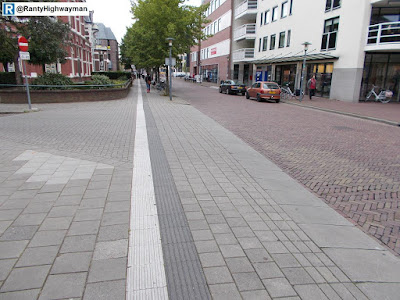 At many junctions (not all), there were continuous footways across side streets and in this example, a tactile surface was aimed to direct visually impaired people along a main route and it also continued across the side street. You can also see that the side street here only joined the main street and the no entry sign had an exemption for cycles and motor scooters. There were a few streets like this and my impression was that they were less desirable to cycle along as they were connecting the core to the ring road.

It was not all rosy for pedestrians. At some of the main junctions, there were no dropped kerbs at all, despite having green men which is pretty hostile; and in some places, the footways became very narrow and certainly space needed to be won back from the motorcar. 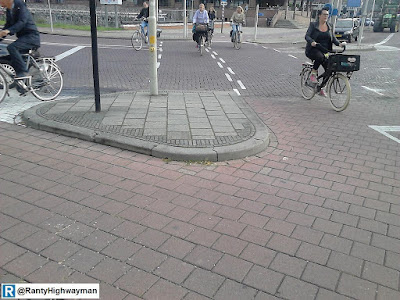 There were also places where "floating" areas for pedestrians waiting to cross the cycle tracks were far to small and cluttered. The photo to the right shows a pedestrian crossing (with green man) on the left and the cycle crossing on the right. Apart from the fact that cyclists are taking a short cut through the pedestrian crossing area, there are no pedestrian dropped kerbs and the the island area is pretty tiny. I think the UK often does this much better.

So, let's get back to the positives. The following photos are fairly random, but can hopefully give a feel for how things are set up;


And so, now to the famous simultaneous green. I have missed some of the blue sign, but I think it is basically saying that cyclists are free to make a right turn (UK left). I don't know if this means all the time and so if anyone knows, please comment. The white sign translates (thanks Google) as "together green" which is nice. The one complication is that there were roadworks and so people on bikes were taken off the usual route with yellow markings through the junction to assist and into more protected infrastructure. I haven't quite worked out the method of control in my own mind, I need to get some sleep and reflect!

Now, as a little treat (and because I managed to work the technology), I filmed the junction in action. Before I sign off for this week, I want to stress again that this post was based on my impression of what I saw and conditions would of course change during the day. I realise that Deventer is not leading the Netherlands for cycling (judging by what I saw from the train), but it gives a fair indication on how cities can be unravelled from the car and the kind of things which seemed to work just fine. I didn't have a guide and didn't cycle, but things looked pretty intuitive to a complete outsider. I don't know when, but I will be going back to the Netherlands!

Update 27/8/15
After an appeal on Twitter, we now know some modal share data for the Deventer municipality as a whole, although it is a bit old, being 2010. We have an overall share of 25%, rising to 38% when journeys under 7.5km (4.6 miles) are considered. Thanks to both Mark Wagenbuur and Richard Mann for the link to the data.

Posted by The Ranty Highwayman at Wednesday, August 26, 2015