Yesterday (13th December) was the second day of the London Cycling Infrastructure Safari Winter Series* held in conjunction with The Cycling Embassy of Great Britain.

This is the third of three posts, with the first and second available here and here. The original idea was to start at Walthamstow as with the first, but the first day was a push without enough time to linger. The latest one started on Cycle Superhighway 2 at Stratford and so cutting out Walthamstow gave us time to spend more time looking at other things and importantly, getting to Tavistock Place to look at Camden's experimental layout in daylight (just).

I think the lesson is that for the future safaris (yes there will be more), we will make them a little shorter to give more time for discussing layouts. I say we, as a special thanks must go to CEoGB board member Alex Ingram, for both his knowledge of the history of London transport in general and in particular knowing his way around far better than I!

We started in the light drizzle on CS2 and headed west to have a look at Bow as with the first ride. We had another crack at the two-stage right turn into Grove Road and while I was looking at the right signal this time, it was not intuitive. The signal for cycles isn't properly facing them in the waiting zone and the signals I mistook the other week are badly louvred and are confusing. We also noted that the protected track on the exit could not cope with a group. The two-stage right turn might be acceptable for one or two people (and who are happy to sit in the road waiting) but I'm afraid that it is no solution for all or for large numbers.

More positive were the loading bays. It is often said that protected cycling infrastructure is not compatible with loading, but that is nonsense of course as there are several loading bays provided along CS2; 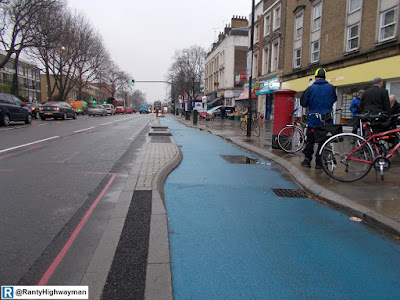 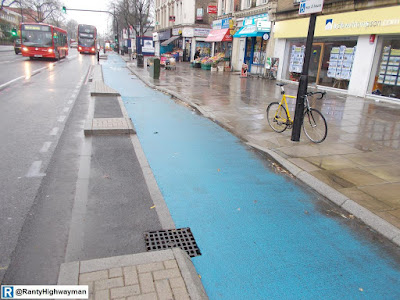 This example operates 7am to 7pm Monday to Saturday and allows loading for 20 minutes or blue badge holders to park for 3 hours. The cycle track width is maintained, but "wiggles" over to create a wider buffer between loading vehicles and people cycling. There are flush areas over which cage trolleys can pushed and a dropped kerb to get up onto the footway (which assists drivers with a mobility impairment or wheelchair users too). One curious feature is the square "lump" of kerb between two flush areas. The consensus was that it is there to stop people pulling into the cycle track to park or load. Seems a reasonable explanation to me. 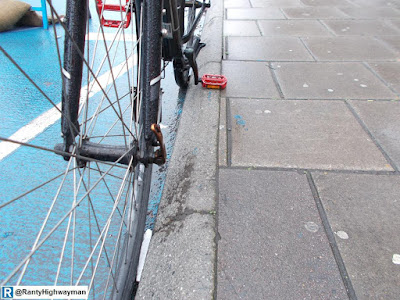 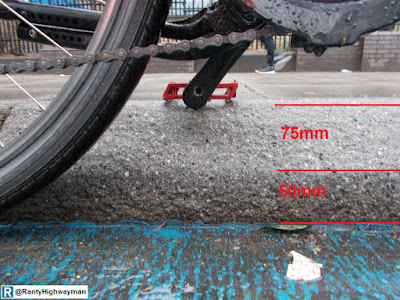 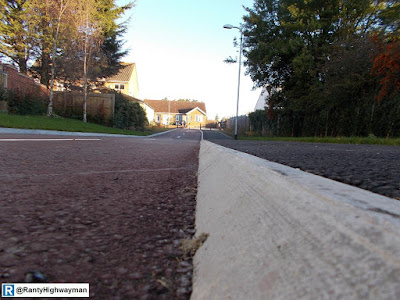 The kerbs remain a problem. CS2 from Bow to Aldgate is using 45 degree splay kerbs. While not as forgiving as the Dutch approach of flatter angled kerbs, if they are set to the bottom of the splay (to give a 75mm upstand), the UK kerbs can maximise available width and are fairly forgiving - here is a video of a track I was involved with where the kerbs are installed correctly. The photo to the right shows how it should be done.

As you can see from the photo above, there is a 50mm vertical upstand as well as the 75mm splay. The reason this is happening (I think) is that the track is being built in an area which was carriageway (and some footway edges). The usual upstand between a footway kerb and a carriageway is 100 - 125mm and we are getting the same between the footway and the track. The problem could be dealt with by adding more surfacing to the track, but in many places the protection is intermittent or missing, so the implication is that the surfacing levels need to be raised on the carriageway too. I suppose if the main carriageway is ever surfaced, levels could be raised with those of the track. My "green field" example was far easier to build by comparison.

Fast forward to he City now, where sections of the East-West Cycle Superhighway are being opened on a weekly basis; word is that they'll connect to CS3 by the Spring. We are seeing some good stuff being built, although the devil will be in the junctions. I can't wait to keep going from the end of CS3, but in the meantime, here is a glimpse of Lower Thames Street (it will be bi-directional when open);

The kerbs have changed again. Those in the strip between the carriageway and cycle track are single-piece granite lumps with a a much smaller chamfer than we've seen before and being low, there is little risk of pedal strike. On the footway side, we have the original kerbs with a fairly small vertical upstand. It is the "wrong" way round compared to the Dutch set up as the forgiving side is by the footway and people will want to keep away from the kerb on the carriageway. We paused for lunch at Westminster after noting a loading bay on The Embankment and a parking bay for the RNLI Tower Lifeboat Station. We then went back for another look at CS5 at Vauxhall. This time, we elected to blast through and we even found a green signal at the crossing of South Lambeth Road (nice).

One issue we noticed this time wound was at a floating bus stop. In order to bend the track behind it, a very narrow footway was left for those walking, although the bus stop island was reasonable. 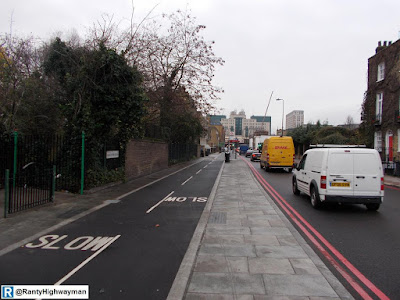 The bus stop "island" actually continues for quite a long way to meet a pedestrian crossing, but we did think that the layout might have been better with the track right at the back of the highway with a wide bus stop island, although this would have meant people crossing the track twice and having to get through the bus stop area. One to watch I think.

We then swung over to (and though) St George's Circus which forms part of the North-South Cycle Superhighway where we continued north along Blackfriar's Road which is being transformed at the moment. We crossed Blackfriar's Bridge to where the N-S will meet the E-W. 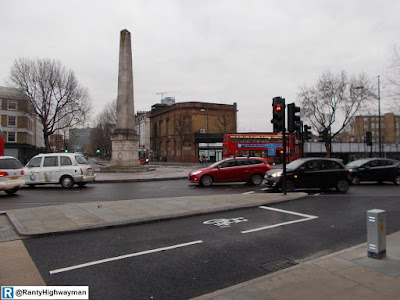 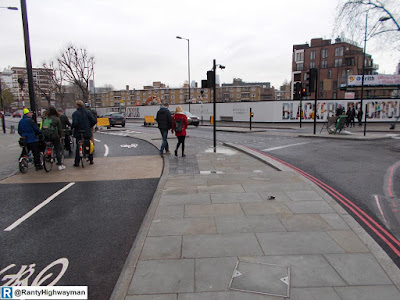 The two photos above are from St George Circus. The lower photo shows a staggered informal crossing of the cycle track into a signalised crossing of the main road. This is less useful for pedestrians and could have been done much better without the stagger and a wider waiting area by the signals. Zebras and signals don't mix as a rule), but I can't see why pedestrians can't have a zebra over the track and from next year, a zebra on a track won't need beacons. 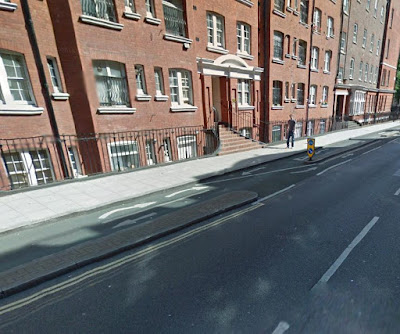 From the cycle superhighways, we just had time to get up to Tavistock Place before dark. The cycling infrastructure on Tavistock place is quite old and consisted of a bidirectional track which featured a quirky crossover point at one end to get those cycling in the right place at some signals (see image left from Google). Traffic was two way along the street.

I don't begin to understand how it fits in with the wider network (it's well-established), but the local authority (Camden) has set up an experiment to convert the old track into a uni-directional affair and with a new mandatory cycle lane in the other direction being taken from a traffic lane and protected with wands and orcas. Traffic is now one-way much to the annoyance/ predictions of the End of Days of some full-time commercial fare-charging drivers. For people cycling, it is great (there are issues of left hook in places, but it's an experiment). 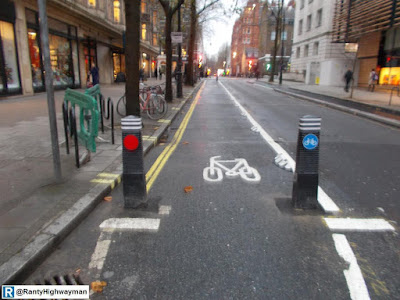 I rode the old layout a few years' ago and it was very tight for two-way cycling. At peak times, the route is really busy and so the experiment shifts the balance to cycling and almost certainly fairer. The orcas are not my favourite piece of kit, but they are spot on for an experimental layout. There are some curious bollards here and there which are pinch points, but I guess it is about reinforcing the message to drivers.

As the day ended, we noticed a few drivers being utterly unable to understand banned turn signs and directional arrows and so some more bedding in is clearly needed, but, it is a good example of doing something quick and cheap to get rapid results. Full details of the scheme are available on Camden's website and I urge you to write in to support the scheme being made permanent; it would be awful to step back from it now. The longer term implication could be a reworking of the street to include wider footways and permanent traffic and cycling arrangements. So, here is another short video, this time, Tavistock Place - note the old (now uni-directional) track on the other side;

It's funny, I had started out just wanting to go and ride some of the new stuff in London as I have done before. It produces good material for the blog and personally, gives me some ideas which can be translated into the day job. The idea for the London Cycling Infrastructure Safaris really came from a few other people saying they fancied coming along too and this has proved to be useful as other views can be aired and debated. I have asterisked "series" in the headline to this blog because as we chatted in the pub yesterday evening it became clear that we needed to carry this on. So, watch this space in 2016, the London Cycling Infrastructure Safaris will return in the Spring.
Posted by The Ranty Highwayman at Monday, December 14, 2015