Last week I reported on the Waltham Forest Mini Holland leg of the first London Cycling Infrastucture Safari which took place a couple of weeks back in association with the Cycling Embassy of Great Britain.

This week, we have the second part which concentrates on a few things we saw on the new Cycle Superhighways under construction. I didn't get many photos, but did make a few videos which will be the bulk of this post and besides, the second ride will be this Sunday (13th December, start at the Old Town Hall, Stratford - from 10am) and so I hope to get a few more snaps, especially as the East-West scheme on the Embankment keeps having bits opening daily!

So, after entering the Olympic Park, we essentially rode wide shared-use paths of varying surface quality with very little to write home about. As one heads towards Stratford, there are railways and some roads which are hostile to cycling and the route to pick up CS2 isn't really signposted, but we got there. Nothing to write home about other than given the area was rebuilt for the games, it was a wasted opportunity for active travel. 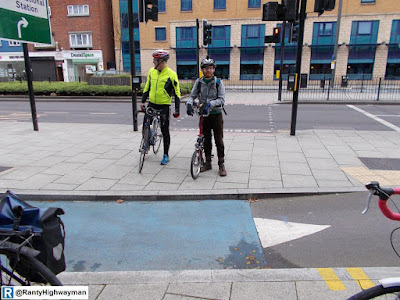 We arrived at High Street, Stratford (where CS2 runs) via Carpenter's Road and was greeted with a staggered Toucan crossing. Landing on the westbound side of High Street one has to dog-leg back on one-self to get onto the cycle track which is very poor.

I have only ridden through before and so not appreciated the awful crossing and join with the track. For pedestrians (especially for those with mobility and visual impairment) it is worse. Why can't we line things up properly? 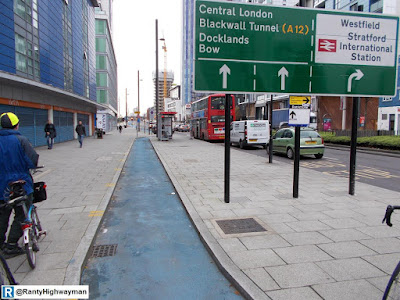 CS2 in Stratford is a couple of years old now and of course is better than just the blue paint of the original treatment heading up to the City. The floating bus stops have 1.5 metre cycle tracks which have been specifically arranged to force people cycling into single file to aid pedestrian safety, but it all feel constrained, especially with vertical kerbs. But, it is light years ahead of cycling with traffic.

In my view, the shelters would be better with their backs on the road side and so as buses pull in, passengers would walk towards cycles to get one with clear views. Those leaving the bus would also have lots of clear space to see or be seen before they crossed the cycle track at either the humped crossing point or informally across the track.

The following is a video shot heading eastbound from the junction of Rick Roberts Way where we had to be on our toes as we are just in an ASL, so left hook is a concern. It takes in a floating bus stop and you will see how people have to go into single file. Also, we pass a pedestrian crossing where the protection ends and so we are exposed to traffic again. 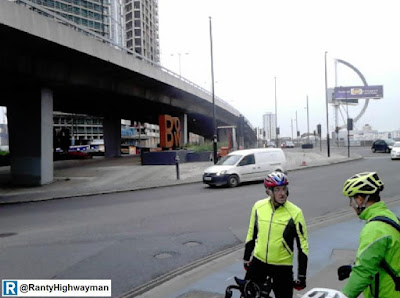 We paused a while to discuss the infamous Bow Roundabout and as we watched, some people struggled to cross. It still remains unsatisfactory for cycling (as it is an "always" stop because of the signal set up), but people walking get no help. Still, some planting has been undertaken in the middle with some sculptures, so that's alright then!

After Bow, we continued towards the City, dodging roadworks and trying to avoid some awful driving. Where we were on the new cycle tracks, things weren't too bad; I have given an early view before and so I now think it is fairer to wait until it's all complete. We stopped at a couple of junctions to look at some UK innovations. 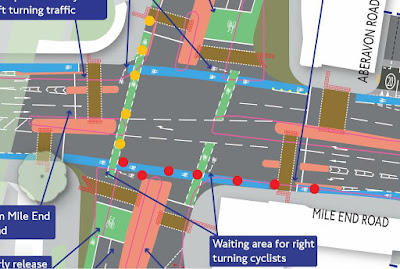 We had a look at the 2-stage right turn at the junction of Mile End Road and Grove Road (which also has a hold the left turn for traffic) which is the UK version of a "Copenhagen Left". Essentially, the arrangement allows one to pass a green signal from within the cycle track as if one was going ahead and then stop in a marked place to wait for a green signal for cross traffic.

The image on the right is TfL's consultation plan, but the red dots show the path after passing the ahead green for cycles (east to west on the plan) with the last two being roughly where riders wait for the second green for the traffic moving from south to north. The second stage is then the orange dots where riders move off either on the same signal as for traffic going south to north or just before with an advanced green cycle signal. It seems complicated and it is. 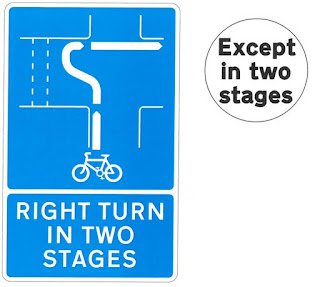 The things to look out for to know what the junction arrangement is the traffic signs. The image on the left is taken from Transport for London's Special Authorisation from the Department for Transport (i.e. non-prescribed signs which TfL is now allowed to use).

The blue sign is an advanced information sign to explain how the junction works for right turning cycles and the white circular sign is mounted on the traffic signals which those cycling see as an exemption from the standard no right turn sign which will be next to it. So far, so complicated, let's watch a group of us have a go;

So, yes  I made a hash of it, but in my defence, it was not immediately clear which signal was aimed at us to complete the turn. This is a safety problem and I would be interested to see if it was picked up by a road safety audit. The waiting area did not feel particularly safe, although probably a subject issue more than a collision-risk issue, although those cycling ahead were essentially in advisory lanes with live traffic to their right.


In truth, TfL's engineers have done the best they can within the constraints of trying to maintain motor traffic while eliminating the left hook for those cycling. The compromise has been the 2-stage right turns and the staggered pedestrian crossings. If the compromise wasn't being made, then I doubt the scheme would have gone ahead and so it does leave a mixed feeling.

We were going to stop at Whitechapel Road and Cambridge Heath Road to study the "hold the left" (it being a UK first), but it was coned off again and we cut our losses and continued west. We reached the end of CS2 at the Aldgate gyratory and then headed off towards CS3 for the quick look. To be honest, there was not much going on, so we dived into a cafe for lunch for recharge our nerves after CS2!

After refreshments, we headed on to have a look at the works on the Embankment which will form part of the East-West Cycle Superhighway which will joint with CS3 in the east. We did pause to look at a few other things, but let's concentrate on the East-West. I am not going to say much as I think will be worthy of it's own blog when it is complete; and besides, this video tells the story so far;


Apart the the humps which have been put in to create a level crossing area for pedestrians, things are really taking shape. With those humps, I have no problem with the concept (level crossing areas are nice and accessible), just the height of the humps (over 100mm is unlawful) and the ramps are steep. I look forward to riding this when it is all complete! 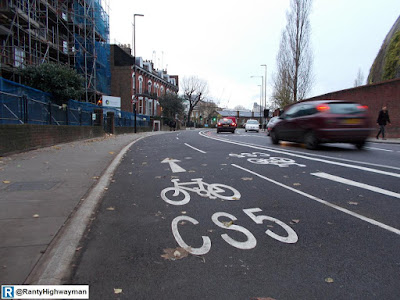 The next part of our trek had us continuing east to Vauxhall to have a look as Cycle Superhighway 5 which has a nice section complete which starts on Vauxhall Bridge Road at the junction with Regency Street, crosses Vauxhall Bridge and then heads down to The Oval - a distance of about one-mile.

The whole section is on a protected bi-directional cycle track as with the Embankment. There are cycle signals of course and it is all rather wonderful. The only two real issues for me was the very long wait at a crossing just east of Vauxhall Station and that the joy ended so soon! Anyway, yet again, the video speaks volumes;

We did have a look at some other work in progress near The Oval, but it is not worth reporting on that just yet. 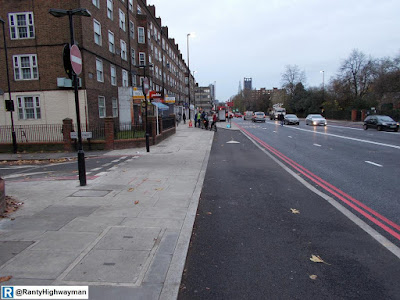 We made plans to head towards Elephant & Castle (which will never be remembered without Adrian Edmondson now) with a couple of us heading back to the City and so people peeled away at various stages.

We had a look at some of the upgrade works on CS7 which runs along the A3 with the fantastic example of a continuous footway and cycle track (uni-directional) passing Magee Street; the real key is the traffic can only leave Magee Street (being one-way) and so left-hook is eliminated. It would be nice to see a cycle contraflow here though. 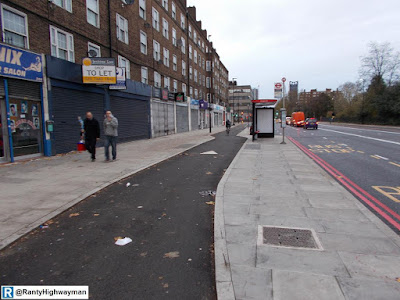 CS7 also had a better example of a floating bus stop than on CS2 and it allows people to ride side-by-side which if course is a very sociable way of riding.

As we approached Elephant & Castle we stopped to have a look at some of the North-South Cycle Superhighway under construction on St George's Road (photo below) which had two-stage gives ways for motorists. Although a little narrow, they are certainly far better than people turning right in and so show a half-decent attempt to prevent left hook. 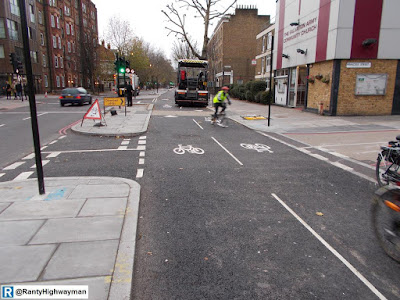 Given that they are only really stepping stones for side road access, they should work reasonably well. As we headed back, we cycled through the new layout at St George's Circus which looks like a mad signals engineer has been let loose. It will be part of the North-South route and this movement seems fine, but it needs a more in-depth visit. As our numbers dwindled, the last 3 of us crossed Southwark Bridge (which has big kerbs to protect weak parapets which also create some safe cycling space for free!).

Finally, the three of us slip up and headed our separate ways home after a long, but very interesting day out. There is some real change in pockets of London. Waltham Forest is starting to show what can be done with decent concentrated funding where primary and secondary streets need to give people cycling protection, but where local streets become good for cycling because through traffic is filtered. The Cycle Superhighways are starting to deliver proper layouts for a proper mode of transport. Yes, things are not perfect, but perhaps at last London is showing how we can make our own way. I do worry for the future as so far, there is not much pace gathering for cycling from some of the Mayoral Candidates and the UK Government remains as committed as every to blowing billions on road building. However, come the summer when lots of this stuff is nearing completion, then we will be able to point at it say "build it and they will come".
Posted by The Ranty Highwayman at Friday, December 11, 2015